TRANSCRIPT
From the Cumberland Gap to the Atlantic Ocean, this is Virginia Water Radio for the week of March 31, 2014.

This week, we feature three mystery sounds.  Have a listen for about 25 seconds, and see if you can guess what current weather-and-water “season” connects these sounds.  And here’s a hint: you can match ‘em up if you spring into action.

If you guessed Spring Wildfire Season, you’re right!  The Virginia Department of Forestry designates February 15 to April 30 as spring wildfire season, when the Commonwealth typically experiences the most wildfires and when open-air burning is permitted only after 4 p.m. and only under certain conditions.  What’s special about this time of year?  Our sounds identify the key factors and actors.  First, you heard strong, dry spring winds—effective at spreading fire—blowing through dried leaves—effective at catching fire.  Second, you heard a sling psychrometer, an old-fashioned but still valuable tool for measuring relative humidity.  High relative humidity makes summer days feel sticky, but typically low relative humidity in spring increases fire potential.  And third, you heard matches being struck and then doused, emphasizing that most wildfires in Virginia are caused by humans, with open-air burning causing about one-third.  So especially in the weeks around April 1, there’s no foolin’ about the dangerous combination of dry air, dry vegetation, and a fire source.  Thanks to Phillip Manuel of the National Weather Service office in Blacksburg for providing the sound of a sling psychrometer. 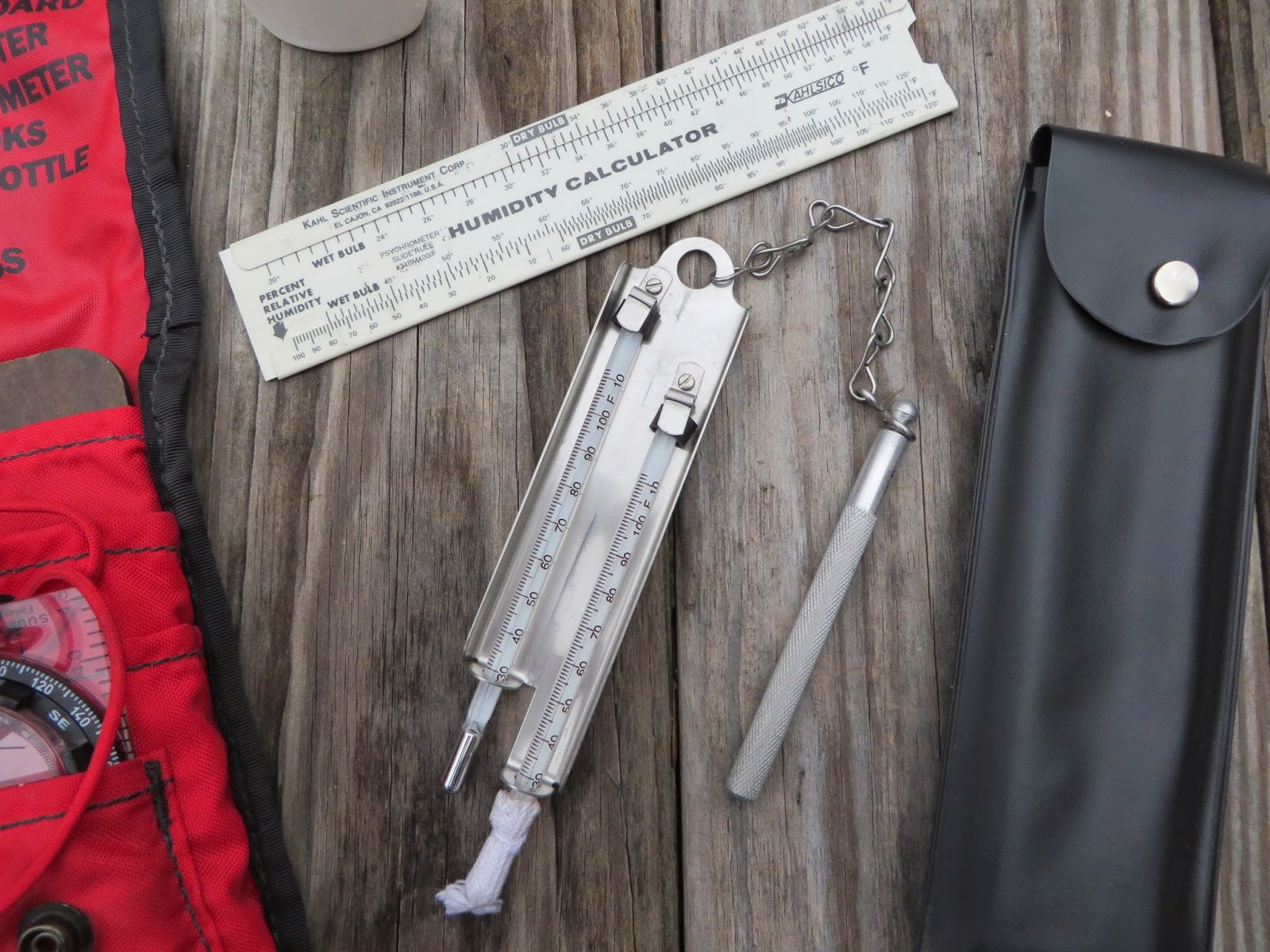 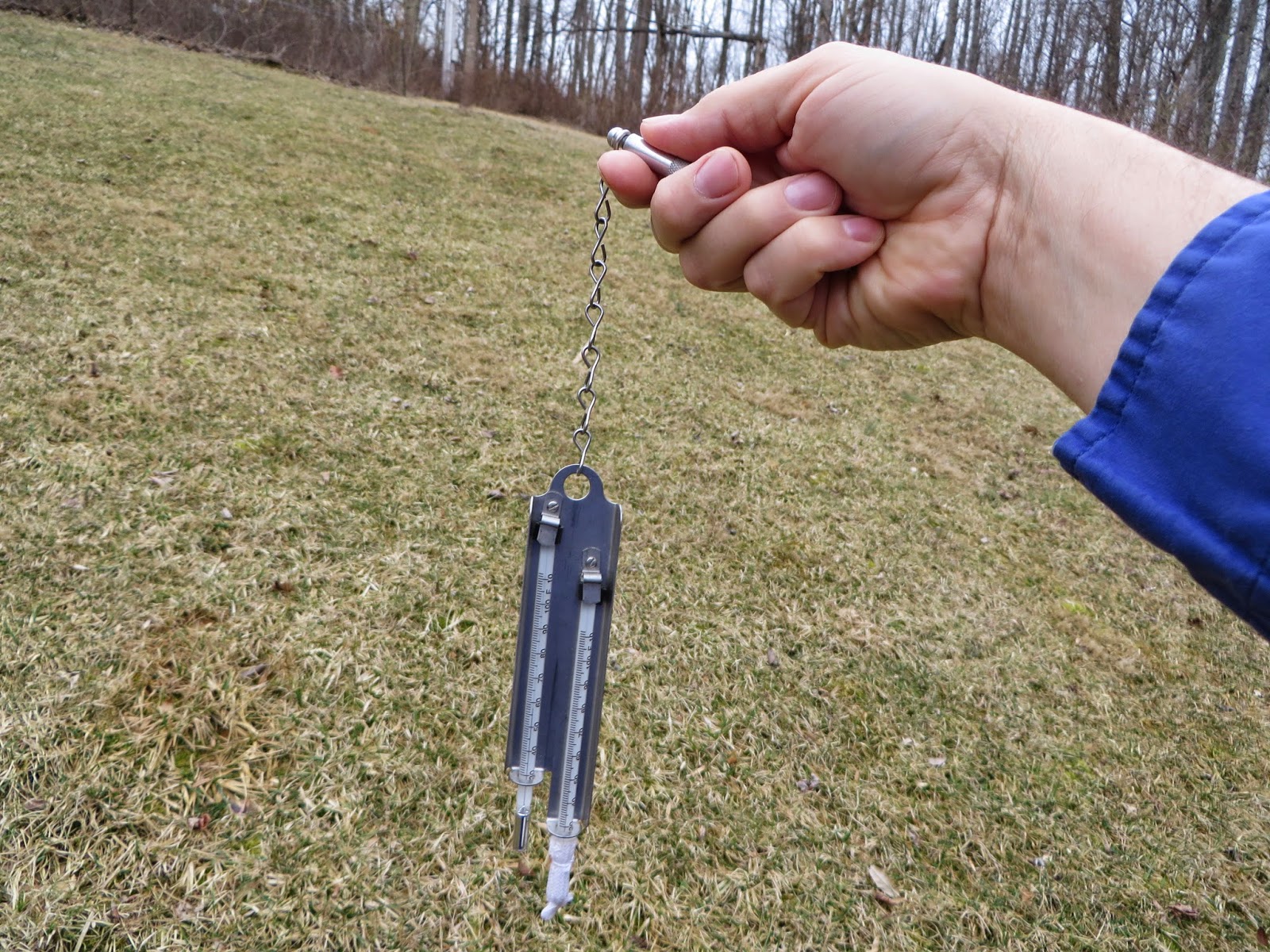 Acknowledgments, Sources, and More Information: The sound of a sling psychrometer was recorded by Phillip Manuel at National Weather Service (NWS) Blacksburg Forecast Office, 3/28/14.  Thanks to Mr. Manuel for the sound and for information on measuring relative humidity, and thanks to David Wert, Meteorologist-in-Charge at the Blacksburg office, for his assistance with this episode.Information on Virginia’s spring wildfire season was taken from the Virginia Department of Forestry’s “Wildfire and Fire Safety” Web site at http://www.dof.virginia.gov/fire/.


A map of current relative humidity readings around Virginia is available online at http://www.usairnet.com/weather/maps/current/virginia/relative-humidity/.  The map is provided by Air Sports Net, a Web site produced by MoonShade Media LLC (http://www.moonshademedia.com/).


To reinforce the concepts of wind, relative humidity, and dry vegetation contributing to wildfire potential, click here for an excerpt (1 min./5 sec.) from a “Red Flag Warning” issued on March 11, 2014, by the NWS office in Blacksburg and broadcast that morning on NOAA Weather Radio.

TRANSCRIPT
From the Cumberland Gap to the Atlantic Ocean, this is Virginia Water Radio for the week of March 24, 2014.

This week, we feature a spring serenade of mystery sounds.  Have a listen for about 30 seconds, and see if you know what kinds of animals are making these sounds.  And here’s a hint: wet skin, wings, and wood-cutting teeth.

If you guessed amphibians, birds, and a beaver, you’re right!  The first three sounds were mating calls of the Wood Frog, Spring Peeper, and American Toad; fourth was a Red-Winged Blackbird; fifth was a pelican chick; and last was an American Beaver, giving a tail-slap warning of an intruder near the animal’s streamside lodge.  These and thousands of other species of animals and plants found either seasonally or year-round in Virginia respond to spring’s increasing daylight, temperature, and availability of water and food to increase their activity, particularly in reproduction.  Spring’s a noisy symphony of changing weather and of animals seeking mates, raising young, and defending territory.  Somewhat by accident, that season of dynamic changes in the Appalachian Mountains has become popularly considered the subject of composer Aaron Copland’s 1944 work, “Appalachian Spring.”  So let’s go out with a well-known melody from that composition, based on the Shaker tune “Simple Gifts” and played here by the Virginia group, Simple Gifts of the Blue Ridge.  Thanks to that group for permission to use this excerpt.


Acknowledgments
The sounds of a pelican chick were taken from the U.S. Fish and Wildlife Service’s “Sound Clips” Web site (public domain sounds) at http://www.fws.gov/video/sound.htm.

The version of “Simple Gifts” used was by the group Simple Gifts of the Blue Ridge, from their 1996 CD “Mountain Mists,” used with permission.  More information about the group is available from their Web site, http://www.sgotbr.com/.

Sources and More Information
Information on Aaron Copland’s “Appalachian Spring” and the role of the traditional tune “Simple Gifts” in the work, was taken from “’Appalachian Spring’ by Aaron Copland,” National Public Radio’s “Performance Today” (1999), online at http://www.npr.org/programs/specials/milestones/991027.motm.apspring.html; and from “Copland and the American Sound,” San Francisco Symphony’s “Keeping Score” (2009), accessed online at http://www.pbs.org/keepingscore/copland-american-sound.html.

Information on amphibians in Virginia is available from the following sources:
*A Guide to the Frogs and Toad of Virginia, by John D. Kleopfer and Chris S. Hobson, Special Publication Number 3, Virginia Department of Game and Inland Fisheries/Richmond (2011);

*Amphibians and Reptiles of the Carolinas and Virginia, by B.S. Martof et. al., University of North Carolina Press/Chapel Hill (1980);

*Atlas of Amphibians and Reptiles in Virginia, J.C. Mitchell and K.K. Reay, Virginia Department of Game and Inland Fisheries/Richmond (1999);

Information on birds in Virginia is available from the following sources:
*VDGIF “Fish and Wildlife Information Service” Web page at http://vafwis.org/fwis/?Title=VaFWIS+Species+Information+By+Name&vUT=Visitor;

*Cornell University Lab of Ornithology’s “All About Birds” Web site at http://www.allaboutbirds.org/guide/search, and the “Birds of North America Online” Web site from the Cornell University Lab of Ornithology and American Ornithologists’ Union, online at http://bna.birds.cornell.edu/bna (subscription required for the latter Web site).  Both Cornell sites include photos, distribution maps, recordings of calls, and ecological information on birds throughout the Western Hemisphere; a subscription is required to use the “Birds of North America Online” site.

*Any of the many field guides in print or online, such as A Guide to Field Identification of Birds of North America, by Chandler S. Robbins et al. (New York: St. Martin’s Press, 2001);

*The Virginia Society of Ornithology, online at www.virginiabirds.net.

Information on the American Beaver was taken from the VDGIF “Fish and Wildlife Information Service” Web page at http://vafwis.org/fwis/?Title=VaFWIS+Species+Information+By+Name&vUT=Visitor; and from Virginia Water Central, April 2005 (pp. 14-15), available online at http://www.vwrrc.vt.edu/watercentral.html.

For other Virginia Water Radio episodes on the animals mentioned, please click on the following links.
*American Beaver: Episode 113, 6-4-12.

Another sign of spring in Virginia is the migration upstream of American Shad and river herring (that term refers to several species), fish that were vital to survival of native peoples and early European settlers in Virginia (see the VDGIF’s “On the Road to Recover: American Shad Restoration,” online at http://www.dgif.virginia.gov/fishing/shad-restoration/).  That history is celebrated every spring by the Wakefield, Va. (Sussex County) Ruritan Club’s Shad Planking Festival, taking place this year on April 16.  For more information about that event, visit http://www.shadplanking.com/.  Movement of shad and other fish upstream in the James River near Richmond is visible on the Virginia Department of Game and Inland Fisheries (VDGIF) Shad Cam at Boshers Dam.  The camera is viewable online at http://www.dgif.virginia.gov/fishing/shadcam/.