Welcome to Virginia Water Radio (Episode 20) for the week of June 7, 2010. This week's show is hosted by Alan Raflo, research associate at the Virginia Water Resources Research Center, located at Virginia Tech in Blacksburg. Our show presents news and notices that relate to Virginia’s waters, from the Cumberland Gap to the Atlantic Ocean.

The Water Sounds and Music section of this episode, on Tundra Swans, has been replaced by Episode 554, 12-7-20. 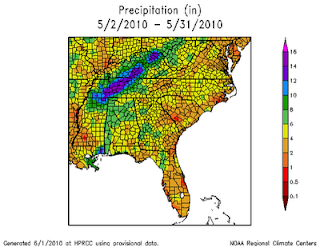 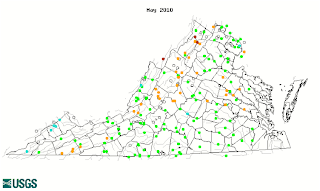 Monthly average streamflow for May 2010, compared to historical records.

This week we featured a new mystery sound: The Tundra Swan (Whistling Swan)

Tundra Swans breed in the Arctic but spend their winters along the Atlantic, Pacific, and Gulf coasts. In Virginia, the birds are found between November and February around the Chesapeake Bay, on the Eastern Shore, and in Back Bay in Virginia Beach. Thanks to the U.S. Fish and Wildlife Service’s Sound Clips Web site for making this recording available for public use. Information about Tundra Swans and other swans found in Virginia is available online from the Virginia Department of Game and Inland Fisheries Web site, http://www.dgif.virginia.gov/wildlife/swan/descriptions.asp. “Swan Songs,” an article on Tundra Swans by Dotty Holcomb Doherty and published in the Nov. 8-14, 2007, issue of Bay Weekly (Vol. 15, Issue 45), is available online at http://www.bayweekly.com/year07/issuexv45/leadxv45_2.html. Additional source: Birds of North America, St. Martin’s Press, 2001.

First, in government policy and regulatory meetings occurring between June 9 and June 16.
Now here are two meetings about Total Maximum Daily Loads, or TMDLs, for impaired waters:
Finally, in educational or recreational events:
For more information about government policy and regulatory meetings, click here for the Virginia Regulatory Town Hall, where these meetings are listed by date. For TMDL meetings, click here for the Virginia Department of Environmental Quality TMDL Web site.

Virginia Water Radio is a product of the Virginia Water Resources Research Center, which is solely responsible for the show’s content. Hosting and bandwidth for this podcast are also provided by the Water Center. We invite you to visit the center online at www.vwrrc.vt.edu.

Opinions expressed on this show are not necessarily those of the Water Center, Virginia Tech, or this station.

If you need more information about anything mentioned this week, call us at (540) 231-5463, or visit our web site at www.virginiawaterradio.org.