All Web addresses mentioned were functional as of 4-15-16.

From the Cumberland Gap to the Atlantic Ocean, this is Virginia Water Radio for the week of April 18, 2016.

This week, we feature another in a series of episodes on water research by Virginia students. To start, have a listen for about 15 seconds to these analytical-device mystery sounds, and see if you can guess what kind of atmospheric gases this device is designed to measure. And here’s a hint: what lets the light in but doesn’t let the heat out?

If you guessed, greenhouse gases, you’re right! You heard sounds from a special kind of spectrometer that uses lasers to measure levels of carbon dioxide, methane, and nitrous oxide, three key greenhouse gases—that is, gases that transmit solar radiation but absorb heat energy radiated back from the earth’s surface, similar to the way glass in a greenhouse works. Scientists studying current and predicted changes in the earth’s climate focus lots of attention on these greenhouse gases, particularly on their levels, sources, storage, and interactions with temperature and precipitation in ecosystems.

Soil ecosystems are one major area of scientific focus. For example, the American Society of Agronomy currently states, “Far too little is known about how management influences soil organic carbon accumulation and greenhouse gas emissions under a diversity of environmental conditions around the world.”

Potential effects on soil greenhouse gases from predicted changes in rainfall intensity—that is, the amount and timing of rainfall—were the focus of research by Tyler Weiglein, a 2015 graduate from Civil and Environmental Engineering at Virginia Tech, and one of four Virginia students who received research grants in 2014 from the Virginia Water Resources Research Center. Let’s listen for about 50 seconds as Tyler describes his research methods.

“We’re here in the Water Quality Lab in the Department of Biological Systems Engineering at Virginia Tech. And right here is a Picarro Cavity Ring-down Spectrometer. It’s used to measure carbon dioxide, methane, and nitrous oxide, three key greenhouse gases. And I used this for my undergraduate research to look at how rainfall frequency and magnitude would affect soil greenhouse gas emissions. Inside the chambers were soil samples that were taken from the Stroubles Creek floodplain, in Blacksburg, Va., near the Virginia Tech campus. And these soil samples were grouped together in treatment groups: each group received the same amount of water, but the timing and magnitude of the water additions was altered to simulate different storm intensities and different storm frequencies.”

By helping clarify possible impacts of rainfall intensity on carbon dioxide and other greenhouse gases in streamside soils, Tyler’s work is part of much broader efforts in Virginia and worldwide to understand better the complicated interactions among climate, atmospheric gases, carbon, and the water cycle.

Thanks to Tyler Weiglein for lending his voice to this episode, and we close with sounds of two aspects of his research: stream flow at Tyler’s research site, and a heavy rainfall. But we’ll just have to imagine the sounds of interactions in the soil among water, organisms, and atmospheric gases!

Audio for this episode was recorded by Virginia Water Radio on April 13, 2016, at the water-quality lab of Virginia Tech’s Biological Systems Engineering Department, and at the Department’s StreamLab research site on Stroubles Creek in Blacksburg, Va. 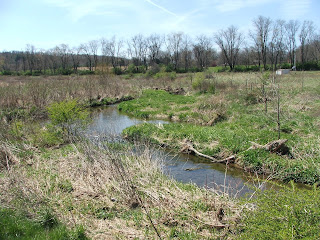 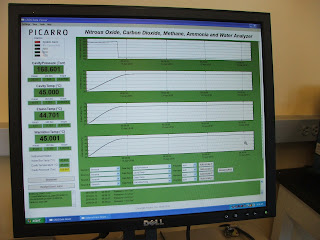 All Water Radio episodes are listed by category at the Index link above (http://www.virginiawaterradio.org/p/index.html). See particularly the “Science” category.

Earth Science Course
ES.11 – origin, evolution, and dynamics of the atmosphere, including human influences on climate.

Virginia’s SOLs are available from the Virginia Department of Education, online at http://www.doe.virginia.gov/testing/.
Posted by Alan Raflo at 4:18 PM