Episode 355 (2-13-17): Abraham Lincoln’s Roots along Waters of the Shenandoah Valley

All Web addresses mentioned were functional as of 2-10-17.

From the Cumberland Gap to the Atlantic Ocean, this is Virginia Water Radio for the week of February 13, 2017.

This week, in honor of Abraham Lincoln’s birthday on February 12, music by a Harrisonburg, Va.-based band sets the stage for exploring the Shenandoah Valley roots of our 16th president. Have a listen for about 45 seconds.

You’ve been listening to part of “Valley,” by The Steel Wheels, from the 2010 album, “Red Wing.” With the band’s home base in Harrisonburg and surrounding Rockingham County, the mountains, waters, and valley mentioned in the song could refer to the Blue Ridge Mountains, Shenandoah River, and Shenandoah Valley.   If Abraham Lincoln’s great-grandfather John or great-grandmother Rebecca had been musicians, they, too might have been inspired by those Virginia land and water features.   In 1768 the John Lincoln family left Pennsylvania and settled along Linville Creek, a tributary of the North Fork Shenandoah River in what was then part of Augusta County, Va., from which Rockingham County was formed in 1778.  In the 1780s, President Lincoln’s grandfather, also Abraham, joined thousands of other Virginians migrating to what was then Virginia’s Kentucky County.  That area became the state of Kentucky in 1792 and, in 1809, the birthplace of the future president.  Five generations of Lincolns are buried at the Rockingham County homestead’s cemetery, where every year—rain or shine—a ceremony is held to remember the most famous descendant of the 17th and 18th Century settlers and migrants along western Virginia’s ridges, rivers, and valleys.

Thanks to The Steel Wheels for permission to use this week’s music, and we close with a few more seconds of “Valley.”

For more Virginia water sounds, music, and information, visit us online at virginiawaterradio.org, or call us at (540) 231-5463. Virginia Water Radio is produced by the Virginia Water Resources Research Center, part of Virginia Tech’s College of Natural Resources and Environment.  Thanks to Stewart Scales for his banjo version of Cripple Creek to open and close the show.  In Blacksburg, I’m Alan Raflo, thanking you for listening, and wishing you health, wisdom, and good water.

“Valley,” from the 2010 album “Red Wing,” is copyright by The Steel Wheels, used with permission.  More information about The Steel Wheels is available online at http://www.thesteelwheels.com/. 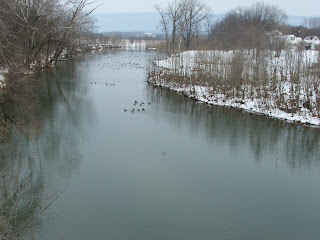 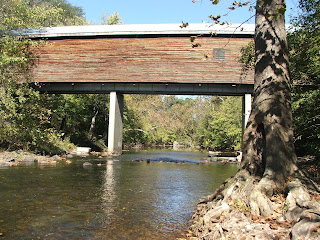 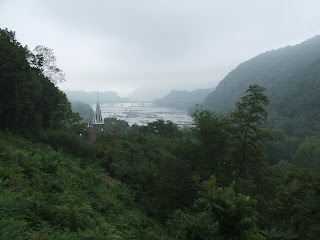 David Hackett Fischer and James C. Kelly, Bound Away: Virginia and the Westward Movement, University of Virginia Press, Charlottesville, 2000.  According to these authors (p. 137), about a million people migrated out of Virginia in late 1700s to mid-1800s; (and from p. 155): “...a human deluge poured down the western rivers and along the Wilderness Road” into Kentucky in the 1780s and 1790s.

Foundation for On-Line Genealogy’s WeRelate Web site, “Early Settlers on Linville's Creek, Augusta County, VA,” online at http://www.werelate.org/wiki/Early_Settlers_on_Linville's_Creek,_Augusta_County,_VA.  According to this source: “Linville Creek was one of the most interesting and important centers of Colonial Virginia. In the lush Shenandoah Valley of Virginia in Augusta (later Rockingham) County, it quickly became a civilized outpost. It had a history before the Swiss Germans joined the English, Quakers, and few Scotch-Irish who were among the earliest settlers.”

Virginia Department of Historic Resources, “Historic Registers/Rockingham County (Northern),” online at http://www.dhr.virginia.gov/registers/Counties/register_Rockingham.htm.  This Web site links to a PDF of the 1972 nomination form for the Lincoln Homestead to be on the National Register of Historic Places; the form includes a description of the property.

All Water Radio episodes are listed by category at the Index link above (http://www.virginiawaterradio.org/p/index.html). See particularly the History subject category.

Previous episodes on the Shenandoah River, its valley, or its tributaries include the following:
Episode 130, 10/1/12 – on the Shenandoah River and valley;
Episode 209, 4/14/14 – on the Blue Ridge and its connection to the James, Rappahannock, and Shenandoah/Potomac watersheds;
Episode 288, 11/2/15 – on mountain gaps in general, and specifically Fridley Gap in Massanutten Mountain, which separates the North and South Forks of Shenandoah River;
Episode 331, 8/29/16 – on Passage Creek and Fort Valley.

World Geography Course
WG.6 - past and present trends in human migration and cultural interaction as influenced by social, economic, political, and environmental factors.

World Geography Course
WG.15 – past and present trends in migration and cultural diffusion, including effects of environmental factors.

Virginia’s SOLs are available from the Virginia Department of Education, online at http://www.doe.virginia.gov/testing/.
Posted by Alan Raflo at 10:25 AM