All Web addresses mentioned were functional as of 8-6-15.


From the Cumberland Gap to the Atlantic Ocean, this is Virginia Water Radio for the week of August 10, 2015.


This week, we feature two mystery sounds, and a guest voice, about two striking birds—striking in looks, and striking in how they hunt.  Have a listen for about 30 seconds, and see if you can guess these two long-necked, long-legged wading birds.


If you guessed, egret or heron, you’re right!  The first call was from a Great Egret and the second from a Great Blue Heron.  The guest voice was Alyson Quinn, reading part of her “Lesson from an Egret,” inspired by a September 2007 visit to the Potomac River.  The word “egret” derives from an old German word for “heron,” a fitting origin for the many similarities between these two big birds.  The Great Egret and the Great Blue Heron are the two largest of 12 North American species of herons, egrets, and bitterns.  The Great Egret is strikingly white, while the Great Blue has only a partially white head over a bluish-gray body.  But a white “morph” of the Great Blue, called the Great White Heron, occurs in Florida.  Great Egrets and Great Blues sometimes hunt on dry land, but both typically feed in shallow water, taking fish, amphibians, and other prey by waiting and watching quietly, then quickly striking with their long, sharp beaks.  The two species also share a history of having been widely hunted for their long plumes in the late 19th and early 20th centuries; the impact on their populations helped lead to nationwide bird-conservation efforts and organizations.

Distinctive looks, behavior, and history make these two “Greats” a memorable and meaningful sight along Virginia’s rivers, ponds, marshes, and other areas.  Thanks to Lang Elliott for permission to use this week’s sounds, from the Stokes Field Guide to Bird Songs, and thanks to Alyson Quinn for permission to share her “Lesson from an Egret,” which gets this week’s last words:


The sounds of the Great Egret and the Great Blue Heron were taken from the Stokes Field Guide to Bird Songs-Eastern Region CD set, by Lang Elliott with Donald and Lillian Stokes (Time Warner Audio Books, copyright 1997), used with permission of Lang Elliott, whose work is available online at http://www.langelliott.com/ and the “Music of Nature” Web site, http://www.musicofnature.org/.


Excerpts of “Lesson from an Egret” are courtesy of Alyson Quinn, from her blog “Winterpast” (9/21/07), available online at http://www.winterispast.blogspot.com/, used with permission.  Ms. Quinn made the recording after a visit to Algonkian Regional Park, located in Sterling, Va. (Loudoun County), part of the Northern Virginia Regional Park Authority.  More information about the park is available online at https://www.nvrpa.org/park/algonkian/. 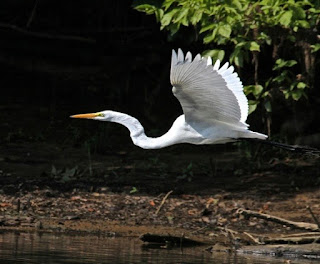 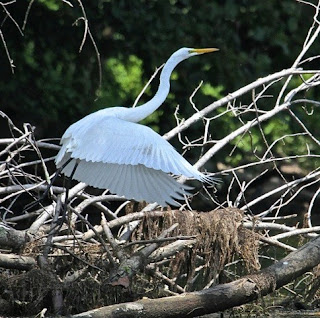 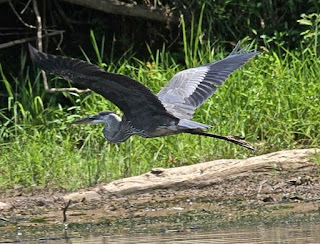 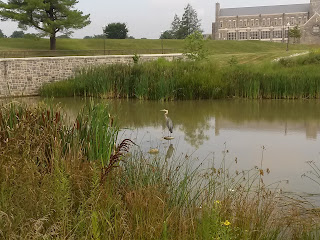 For More Information about Egrets and Herons

E-bird Web site, maintained by the Cornell Lab and the Audubon Society, online at http://ebird.org/content/ebird/.  Here you can find locations of species observations made by contributors, and you can sign up to contribute your own observations.


Virginia Society of Ornithology - non-profit organization dedicated to the study, conservation, and enjoyment of birds in the Commonwealth; online at www.virginiabirds.net.

For other episodes on birds in Virginia, please see the “Birds” category at the Index link above (http://www.virginiawaterradio.org/p/index.html).

Biology Course
BIO.8 - dynamic equilibria and interactions within populations, communities, and ecosystems; including analysis of the flora, fauna, and microorganisms of Virginia ecosystems.

Virginia’s SOLs are available from the Virginia Department of Education, online at http://www.doe.virginia.gov/testing/.
Posted by Alan Raflo at 2:21 PM