All Web addresses mentioned were functional as of 10-16-15.

From the Cumberland Gap to the Atlantic Ocean, this is Virginia Water Radio for the week of October 19, 2015.

This week, the sounds of Canada Geese set the stage for an introduction to Goose Creek, a Potomac River tributary that’s long been a defining geographic feature for Loudoun County, Virginia. We start with about 40 seconds of music performed in Goose Creek territory, by the Harrisonburg, Va.-based band The Steel Wheels.

You’ve been listening to part of “Riverside,” performed by The Steel Wheels during their October 14, 2010, “Live at Goose Creek” concert, produced by Goose Creek Music and held near the Loudoun County town of Purcellville. The concert spot is close to North Fork Goose Creek, a few miles from that stream’s confluence with mainstem Goose Creek. Also nearby is the village of Lincoln, originally called “Goose Creek” and the site of a Quaker settlement that was believed to be involved in the Underground Railroad passage of escaping slaves seeking to cross the Potomac River on their way to Pennsylvania. That history offered “Live at Goose Creek” listeners an interesting local meaning for “Riverside’s” lyrics about “shackles on my feet.”

Beyond Civil War connections, Goose Creek’s had many roles: it was the site of a canal in the mid-1800s that ultimately failed in competition with railroads; it’s provided the location for two water-supply reservoirs in operation since the 1960s; it’s an important wildlife and recreational resource, having become part of Virginia’s Scenic Rivers Program in 1976; and—east of Leesburg, Loudoun’s county seat—the creek has served since the earliest European settlements as something of a dividing line between different land use patterns in the county’s eastern and western sections. Like many other waterways in many other counties, Goose Creek has helped shape Loudoun County’s environment, history, economy, and culture.

Thanks to The Steel Wheels for permission to use this week’s music, and we close with part of another tune from the “Live at Goose Creek” concert: “Walk This Way For Awhile,” to recognize Goose Creek’s many roles in movement and change by water, wildlife, and people.

“Riverside” and “Walk This Way For Awhile” are both from the album “Live at Goose Creek,” recorded October 14, 2010, at Franklin Park Performing Arts Center, Purcellville, Va., and produced by Goose Creek Productions; used with permission of The Steel Wheels. The Steel Wheels have a number of songs with Virginia themes and water imagery, and a water-based bird—the Red-winged Blackbird—ends its name to the band’s annual Red Wing Roots Music Festival in Natural Chimneys State Park in Augusta County, Va. More information about The Steel Wheels is available online at http://www.thesteelwheels.com/. More information about Goose Creek Productions is available online at http://www.goosecreekmusic.com/. More information about the Franklin Park Arts Center is available online at http://www.franklinparkartscenter.org/. 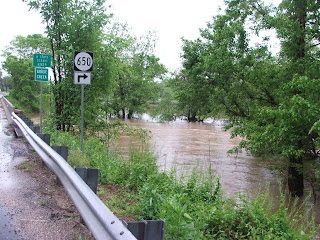 On Scenic River status: Forty-eight miles of Goose Creek—from the confluence of its north and south prongs near Linden (in Fauquier County) to its confluence with the Potomac River—are designated as a State Scenic River, first designated in 1976 and last extended in 2007. It was Virginia’s fourth designated Scenic River, preceded by the Falls of the James in 1972 and sections of the Rivanna and Staunton rivers in 1975. As of May 2015, 27 Virginia rivers or streams had one or more sections designated. Source: From the Virginia Department of Conservation and Recreation, “Scenic Rivers Program,” online at http://www.dcr.virginia.gov/recreational_planning/srmain.shtml.

On settlements: Loudoun County’s first Quaker settlement was established in 1742 by Jacob Janney and was called The Quaker Settlement at Goose Creek; it was later named Lincoln in honor of the president. During its earliest European settlement, Loudoun had two basic settlement trends: one from the east by “sons of plantation owners who established large tobacco plantations in the County similar to those established by their fathers in Tidewater Virginia”; and one from the west of Quakers, Germans, Irish from Pennsylvania, New Jersey, and Maryland, “...famers, merchants, tradesmen, and millers owning smaller tracts of land varying from 40 to a few hundred acres.” In the 1970s, as eastern Loudoun began to experience dense residential and commercial development, western Loudoun continued to consist primarily of small towns, rural housing, and agricultural areas. During that period, Goose Creek east of Loudoun was somewhat of a symbolic border between eastern and western Loudoun. Eventually denser development come to many of the parts of Loudoun west of Goose Creek, too. Sources: Virginia Commission on Outdoor Recreation, “Goose Creek: A Report to the Governor and General Assembly/An Element of the Virginia Outdoors Plan,” December 1975, p. 7; and personal observations by Virginia Water Radio host Alan Raflo, a Leesburg, Va., native.

Virginia Commission on Outdoor Recreation, “Goose Creek: A Report to the Governor and General Assembly/An Element of the Virginia Outdoors Plan,” December 1975.
|
Virginia Department of Conservation and Recreation, “Scenic Rivers Program,” online at http://www.dcr.virginia.gov/recreational_planning/srmain.shtml. A list of the rivers is available in the PDF document at this link: http://www.dcr.virginia.gov/recreational-planning/document/srlist.pdf.

VirginiaPlaces.org, “Drinking Water for the City of Fairfax,” online at http://www.virginiaplaces.org/watersheds/fairfaxwater.html.

For other episodes on water-related geographic features in Virginia, please see the “Rivers, Streams, and Other Surface Water” category” category at the Index link above (http://www.virginiawaterradio.org/p/index.html).

Earth Science Course
ES.8 - influences by geologic processes and the activities of humans on freshwater resources, including groundwater and major watershed systems in Virginia.

United States History to 1865 Course
USI.2 – water features important to the early history of the United States.
USI.5 – factors that shaped colonial America.World Geography Course
WG.3 - how regional landscapes reflect the physical environment and the cultural characteristics of their inhabitants.
WG.6 - past and present trends in human migration and cultural interaction as influenced by social, economic, political, and environmental factors.
WG.7 - types and significance of natural, human, and capital resources.
WG.10 - cooperation among political jurisdictions to solve problems and settle disputes [Note to teachers: the history of the Goose Creek reservoirs provide an interesting case study in relationships among the City of Fairfax, Fairfax County, Loudoun County, and the Town of Leesburg.]

Government Course
GOVT.9 – public policy at local, state, and national levels [Note to teachers: Goose Creek as a Virginia Scenic River may be of interest here for this SOL and for GOVT. 16.]
GOVT.16 – role of government in Va. and U.S. economies, including examining environmental issues and property rights.

Virginia’s SOLs are available from the Virginia Department of Education, online at http://www.doe.virginia.gov/testing/.
Posted by Alan Raflo at 4:38 PM