All Web addresses mentioned were functional as of 10-28-16.

From the Cumberland Gap to the Atlantic Ocean, this is Virginia Water Radio for the week of October 26, 2015.

This Halloween week, the opening organ from the song “Halloween,” by John McCutcheon on his 1998 album “Autumnsongs,” sets a spooky stage for connecting water to a vital human organ system that’s also one of Halloween’s most familiar spectres.  Have a listen for about 15 seconds to a mystery sound, and see if you can guess that organ system.  And here’s a hint: we couldn’t move at all, much less rattle around, without this remarkable framework.

If you guessed the skeleton, you’re right!  The rattling you heard was from a plastic Halloween skeleton, accompanied by some creepy laughter from a talking skull decoration.  Since ancient times, human skeletons have been used in art, literature, and culture as symbols of danger, death, and dryness. In fact, the word “skeleton” comes from a Greek word meaning “dried up.”  But there’s nothing dead nor dry about a functioning human skeleton.  Our 206 bones contain active cells and tissues that continually take in and release calcium and phosphorus while producing new bone, blood, and fat cells.  Bone is about 25 to 30 percent water by weight, with the rest consisting of minerals plus connective protein fibers called collagen.  Water is the main component of cartilage, the flexible tissue between bones, in our nose and ears, and in the disks between the vertebrae in our spine.  In those spinal disks, cartilage fibers enclose a watery core, and this water’s resistance to being compressed helps vertebrae move while not being pushed together.

Ligaments, tendons, and other structures join bones and cartilage in the complex, multi-purpose skeletal system.  Aided by water, the skeleton supports the body; protects internal organs; produces cells; and provides levers, pivot points, and cushions to the forces acting on and within the body.  All that, and it’s a classic Halloween image!

Thanks to John McCutcheon and Appalseed Productions for permission to use this week’s music, and we close with a few more seconds of “Halloween.”

Thanks to Gabe Minnich of Virginia Tech University Relations and to Jane Hellman for their assistance with this week’s sounds. 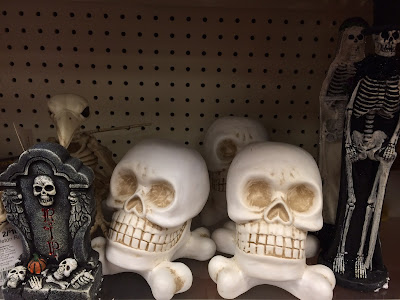 A skeleton theme was popular for Halloween items at this Blacksburg, Va., store in October 2015.

Used in Audio and For More Information about the Human Skeleton

On Examples of Use of the Human Skeleton in Popular Culture
“The Skeleton Dance,” 1929, by Walt Disney; see “The Encyclopedia of Disney Animated Shorts,” online at http://www.disneyshorts.org/shorts.aspx?shortID=102.