All Web addresses mentioned were functional as of 5-6-16.

From the Cumberland Gap to the Atlantic Ocean, this is Virginia Water Radio for the week of May 9, 2016.

That’s a U.S. Fish and Wildlife Service recording of shorebirds.  The broad term “shorebirds” refers to a large, diverse group of wading and swimming birds, including seven different bird families in North America.  One of those is the family of sandpipers, with about 50 species observed within North America and about 30 species observed within Virginia.  Sandpipers breed typically in areas north of Virginia, but many species are winter residents along Virginia’s coastlines or can be seen migrating through parts of the Commonwealth.  Besides many species actually called sandpipers, the family includes groups with a variety of other common names, including curlews, godwits, phalaropes, and turnstones.  Although many sandpipers are coastal shorebirds, some in the family spend time around inland waters.

Small sandpipers are often called “peeps,” and both that name and the “piper” name fit the kinds of sounds many sandpipers make.  Have a listen for about 25 seconds to a sample; you’ll hear a Sanderling, Dunlin, Least Sandpiper, Ruddy Turnstone, and Short-billed Dowitcher, courtesy of Lang Elliott and the Stokes Field Guide to Bird Songs.

Another characteristic of various shoreline sandpipers is the habit of flying in large, coordinated flocks, referred to sometimes as a flying cloud.   For example, an October 2014 article by the Audubon Society and BirdNote® asked, “What is that cloud low in the autumn sky, shape-shifting as you watch from a beach or mudflat...? It's a cloud of small sandpipers called Dunlins.”

Finally, a notable visual feature of various sandpiper species is breeding feathers colored with some combination of red and brown—one might say “rusty”—such as in the Dunlin, Ruddy Turnstone, Red Knot, and Red Phalarope.

Flying clouds, rusty colors, and piping – by a strange coincidence, these three sandpiper features just happen to be captured in the title of a medley by the Blacksburg and Roanoke-based band No Strings Attached! S o with thanks to Lang Elliott for the sandpiper sounds, and to No Strings Attached, we close with part of “Flying Cloud Reel” and “Rusty Piper.”

For more Virginia water sounds, music, and information, visit us online at virginiawaterradio.org, or call us at (540) 231-5463.  Virginia Water Radio is produced by the Virginia Water Resources Research Center, part of Virginia Tech’s College of Natural Resources and Environment.   Thanks to Stewart Scales for his banjo version of Cripple Creek to open and close the show.   In Blacksburg, I’m Alan Raflo, thanking you for listening, and wishing you health, wisdom, and good water.

“Flying Cloud Reel/Rusty Piper,” by No Strings Attached, is from the 1999 album “In the Vinyl Tradition—Volume I,” from Enessay Music, used with permission. More information about No Strings Attached is available online at http://www.enessay.com/.

Thanks to Shannon Ritter of the Virginia Tech Department of Fish and Wildlife Conservation, and to Randy Marchany of No Strings Attached, for their help with this episode. 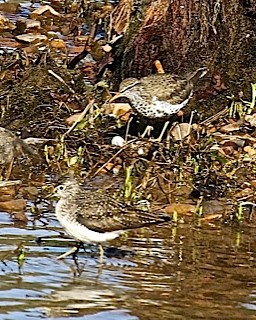 Solitary Sandpiper (front) and Spotted Sandpiper (back) along the New River in Radford, Va., April 29, 2015.  Photo by Robert Abraham of Christiansburg, Va., used with permission. 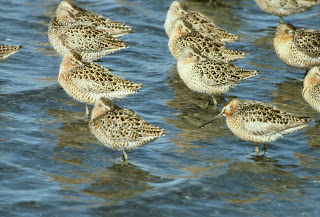 EXTRA FACTS ABOUT SANDPIPERS
Scientists group sandpipers in the taxonomic family Scolopacidae, which includes birds with the common names of sandpipers, curlews, dowitchers, phalaropes, woodcock, snipe, and others.

The Virginia Department of Game and Inland Fisheries “Fish and Wildlife Information Service/Species Information” Web site, online at http://vafwis.org/fwis/?Menu=Home, lists the following species in the sandpiper family (Scolopacidae) as having been observed in Virginia (some only as transients and some only occasionally).

Alice Jane Lippson and Robert L. Lippson, Life in the Chesapeake Bay, Johns Hopkins University Press, Baltimore, Md. (2006). [From p. 89: “As the tide ebbs and the flats emerge from the sea awash with seaweeds and alive with prowling crabs and hopping amphipods, clouds of small sandpipers arrive on the flats and being feeding. ...tiny brown sandpipers known as ‘peeps.’”]

For More Information about Sandpipers

Cornell University Lab of Ornithology and the Audubon Society, E-bird Web site at http://ebird.org/content/ebird/.  Here you can find locations of species observations made by contributors, and you can sign up to contribute your own observations.

Virginia Society of Ornithology: online at www.virginiabirds.net.  The Society is non-profit organization dedicated to the study, conservation, and enjoyment of birds in the Commonwealth.

Xeno-canto Foundation Web site at http://www.xeno-canto.org/.  The site provides bird songs from around the world.

All Water Radio episodes are listed by category at the Index link above (http://www.virginiawaterradio.org/p/index.html); see particularly the “Birds” subject category.

For a previous episode on other sandpiper species (Solitary Sandpiper and Spotted Sandpiper), see Episode 264, 5/4/15.

For a previous episode on another kind of small shorebird (Piping Plover), see Episode 79, 9/12/11.