All Web addresses mentioned were functional as of 1-20-17.

From the Cumberland Gap to the Atlantic Ocean, this is Virginia Water Radio for the week of January 23, 2017.

This week, we feature another mystery sound.   Have a listen for about 20 seconds, and see if you can guess what’s making these calls.  And here’s a hint: what might you get if you combined fins with feathers in large, calling flocks?

If you guessed Fish Crows, you’re right!  The Fish Crow is one of four species of crows that live in North America, along with two species of ravens, similarly black-colored but larger birds that can be confused with crows. T wo species of crows are found in Virginia—the very common and well-known American Crow, and the slightly smaller Fish Crow.  Fish Crows look so much like American Crows, however, that the best way to distinguish them is the difference between each species’ basic call.  Have another listen for a few seconds to the Fish Crow’s basic two-note call, followed by the basic one-note call of the American Crow.

Historically, Fish Crows were primarily found near beaches, marshes, rivers, and other water bodies along the Atlantic and Gulf Coasts.  But over the past few decades the species has expanded inland and into more northern areas, particularly near water and near human structures that offer food, such as fishing piers, garbage containers, and agricultural fields.  Like other crows, Fish Crows will eat many kinds of food, including crabs and other marine invertebrates, turtle eggs, bird eggs and nestlings, carrion, trash, fruit, grain, and anything they can steal from other birds, according to the Cornell University Lab of Ornithology.   Other generally crow-like behaviors shown by Fish Crows include making a variety of sounds; gathering in flocks of hundreds or thousands during non-breeding times to feed and roost; forming mobs to drive away hawks and other predators; and displaying remarkable curiosity about objects they find.

Thanks to Lang Elliott for permission to use this week’s sounds, from the Stokes Field Guide to Bird Songs.

The sounds of the Fish Crow and American Crow were taken from the Stokes Field Guide to Bird Songs-Eastern Region CD set, by Lang Elliott with Donald and Lillian Stokes (Time Warner Audio Books, copyright 1997), used with permission of Lang Elliott, whose work is available online at the “Music of Nature” Web site, http://www.musicofnature.org/. 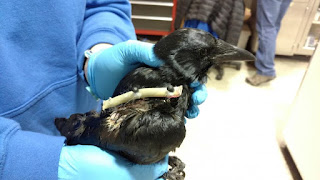 Above: A Fish Crow with a broken wing being treated in November-December 2016 at the Wildlife Center of Virginia in Waynesboro (http://wildlifecenter.org/).  Photo used with permission of the Wildlife Center.  The story of this bird’s rehabilitation, “Fish Crow #16-2468,” is available online at http://wildlifecenter.org/critter-corner/current-patients/fish-crow-16-2468. 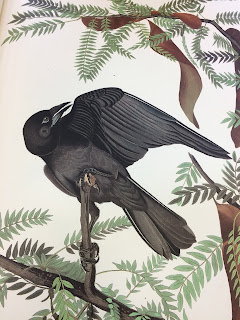 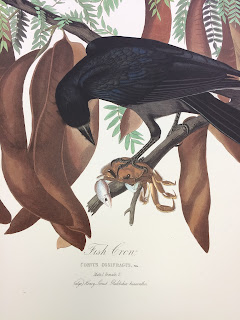 Above: Segments of the Fish Crow painting done in the 1830s by John James Audubon in Birds of America (plate CXLVI [146]), as reprinted in 1985 by Abbeville Press, New York.  Upper photo is the male, lower is the female.  Photos taken January 23, 2017, from the reprint copy (no. 6 of 350 copies printed in 1985) owned by Special Collections of Virginia Tech Libraries.  Virginia Water Radio thanks Special Collections for permission to photograph their copy and for their assistance.

For More Information about Birds

Virginia Society of Ornithology: online at www.virginiabirds.net.  The Society is non-profit organization dedicated to the study, conservation, and enjoyment of birds in the Commonwealth.

Xeno-canto Foundation Web site at http://www.xeno-canto.org/.  This site provides bird songs from around the world.

All Water Radio episodes are listed by category at the Index link above (http://www.virginiawaterradio.org/p/index.html). See particularly the “Birds” subject category.

A previous episode featuring the sounds of American Crows is Episode 309 (3-28-16): A Pondside Temperature Tale.

Virginia’s SOLs are available from the Virginia Department of Education, online at http://www.doe.virginia.gov/testing/.
Posted by Alan Raflo at 10:18 AM