All Web addresses mentioned were functional as of 1-6-17.

From the Cumberland Gap to the Atlantic Ocean, this is Virginia Water Radio for the week of January 9, 2017.

This week is our annual preview of the Virginia General Assembly.  We start with some music that dates back to the time when Virginia’s legislature first convened.  Have a listen for about 30 seconds.

You’ve been listening to part of “Sir John Smith, His Almayne,” performed by Timothy Seaman, from the 2006 album, “Jamestown—On the Edge of a Vast Continent,” from Pine Wind Music.  This tune—written NOT for Captain John Smith but for another Englishman with that name—was composed by John Dowland, a popular English musician during the early 1600s reign of King James I, for whom the English settlement on Jamestown Island was named.

At a Jamestown church in 1619, 22 colonists gathered for the first meeting of the Virginia House of Burgesses, which along with the royal governor and his council formed the colony’s General Assembly.  2017 marks the 399th year of this annual Assembly.  Beginning this year on January 11, 100 members of the House of Delegates and 40 state senators will consider some two-to-three thousand bills and resolutions, along with amendments to the Commonwealth’s current biennial budget.  Water will be part of that agenda, just as it has been since Captain John Warde’s fishing success was a consideration in his being seated as one of the original burgesses.   Probably 100 to 200 bills will address aquatic environments, fisheries, water supplies, wastewater systems, or energy and land uses that affect water.  The session will move fast, and the decisions may have widespread and important consequences.  You can be part of Virginia’s 399-year tradition of representative government by following the General Assembly’s work and by contacting your delegate or senator about issues of concern.

Thanks to Timothy Seaman for permission to use this week’s music, and we close with a few more seconds of the almayne for Sir John Smith.

“Sir John Smith, His Almayne,” from the 2006 album “Jamestown: On the Edge of a Vast Continent,” is copyright by Timothy Seaman and Pine Wind Music, used with permission.  More information about Timothy Seaman is available online at http://timothyseaman.com/en/.

According to Timothy Dickey (“John Dowland—Sir John Smith, his Almain, for Lute, P47,” AllMusic Web site, online at http://www.allmusic.com/composition/sir-john-smith-his-almain-for-lute-p-47-mc0002373007), an almayne, or almain, is a dance typically considered to be of German origin, or a tune for such a dance.  The “John Smith” in the title is not the Captain John Smith, famous for his role in the Jamestown settlement, but another Englishman with that fairly common name. 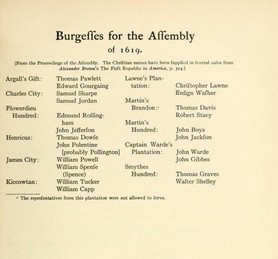 List of the first members of the Virginia House of Burgesses in 1619.  Page vi. of the Journals of the House of Burgesses, 1619–1658/59, H. R. McIlwaine, ed., Virginia State Library, Richmond, 1915.  Image accessed at the Virginia Foundation for the Humanities’ Encyclopedia Virginia, “Primary Resource: Burgesses for the Assembly of 1619,” online at http://www.encyclopediavirginia.org/Burgesses_for_the_Assembly_of_1619.

Following are the 22 colonists elected to serve in the Virginia House of Burgesses in 1619, listed by the areas or plantations that they represented (* = representatives not allowed to serve).

Source: Virginia Foundation for the Humanities’ Encyclopedia Virginia, “Primary Resource—Burgesses for the Assembly of 1619,” online at http://www.encyclopediavirginia.org/Burgesses_for_the_Assembly_of_1619.

Independence Hall Association in Philadelphia Web site US History.org, “Britain in the New World/House of Burgesses,” online at http://www.ushistory.org/us/2f.asp.

Virginia Legislative Information System, online at http://leg1.state.va.us/.  This site provides access to member bills and the state budget for each session going back to 1994. I t also has information on members and committees, the Virginia Code, the Virginia Constitution, and more.

For More Information about Music in Colonial Virginia

This episode may help with the following 2010 Science SOLs:

Biology Course
BIO.8 – dynamic equilibria and interactions within populations, communities, and ecosystems; including effects of natural events and human activities.

The episode may also help with the following 2008 Social Studies SOLs:

The episode may also help with the following  2015 Social Studies SOLs, which become effective in the 2017-18 school year:

Virginia Studies Course
VS.3 – first permanent English settlement in America.
VS.10 – knowledge of government, geography, and economics in present-day Virginia.

Virginia’s SOLs are available from the Virginia Department of Education, online at http://www.doe.virginia.gov/testing/.
Posted by Alan Raflo at 3:19 PM