All Web addresses mentioned were functional as of 6-16-17.

From the Cumberland Gap to the Atlantic Ocean, this is Virginia Water Radio for the week of June 19, 2017.

This week, the sound of the James River at Lynchburg opens a revised repeat of a 2013 episode—a “double-header” of music and sounds to mark the annual James River Batteau Festival.  Batteaux [the plural of batteau] were wooden, shallow-draft boats used on the James and many other rivers and canals to transport goods in the 18th and 19th centuries.  Such boats have been called the tractor-trailers of their day, traveling on water-based highways.  The batteau era ended with the widespread building of railroads in the 1800s, but the annual batteau festival—an eight-day float down the James on replica vessels—recalls the boats, crews, costumes, and lifestyle of the era.  The 120-mile float in 2017 starts in Lynchburg on June 17 and ends at Maidens boat landing in Powhatan County on June 24.

We mark this unique water event first with a 45-second excerpt from a song about river boatmen losing their jobs to the railroads: “James River Blues,” by Old Crow Medicine Show on the 2006 album “Big Iron World,” from Nettwork Records.  Following the music are about 90 seconds of sounds from the batteau festival launch in Lynchburg in June 2013.  The speaker is Jeff Taylor, the emcee at that event, and the loud boom you’ll hear is a replica cannon on one of the boats.

More information on batteaux and on other historical river and canal transportation is available from the Virginia Canals and Navigations Society, which organizes the annual James River batteau journey.  Thanks to Old Crow Medicine Show for permission to use this week’s music, and we close with a few more seconds of “James River Blues.”

For more Virginia water sounds, music, and information, visit us online at virginiawaterradio.org, or call us at (540) 231-5463.   Virginia Water Radio is produced by the Virginia Water Resources Research Center, part of Virginia Tech’s College of Natural Resources and Environment.  Thanks to Ben Cosgrove for his version of “Shenandoah” to open and close the show.   In Blacksburg, I’m Alan Raflo, thanking you for listening, and wishing you health, wisdom, and good water.

Sounds from the 2013 Battteau Festival launch were recorded by Virginia Water Radio on June 15, 2013, on Percival’s Island in Lynchburg.  The band heard playing at that launch was the Virginia group Chamomile and Whiskey; information about that band is available online at http://www.countywidemusic.com/members-app/chamomile-and-whiskey. 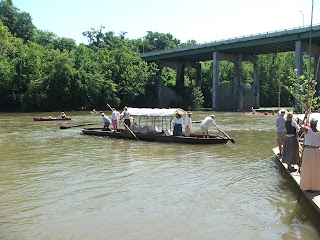 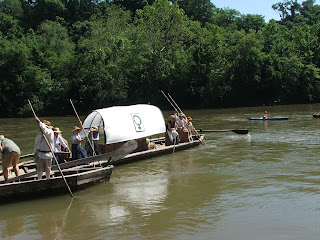 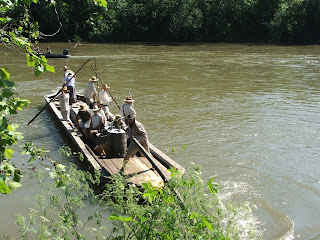 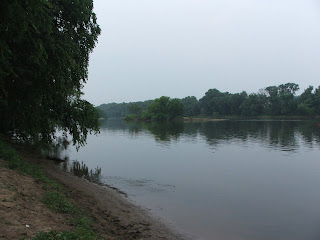 The stopping point for the 2017 James River Batteau Festival: the James near Maidens, Va., on the Goochland/Powhatan county line, shown here on June 19, 2007.

A photo gallery by the Lynchburg News & Advance of the 2017 James River Batteau Festival launch is available online at this link.

United States History to 1865 Course
USI.2 – major land and water features of North America.
USI.5 – factors that shaped colonial America and conditions in the colonies, including how people interacted with the environment to produce goods and service.
USI.8 – westward expansion and reform from 1801-1861.

World Geography Course
WG.2 - how selected physical and ecological processes shape the Earth’s surface, including climate, weather, and how humans influence their environment and are influenced by it.
WG.3 - how regional landscapes reflect the physical environment and the cultural characteristics of their inhabitants.

Virginia’s SOLs are available from the Virginia Department of Education, online at http://www.doe.virginia.gov/testing/.
Posted by Alan Raflo at 10:43 AM