All Web addresses mentioned were functional as of 9-7-18.

From the Cumberland Gap to the Atlantic Ocean, this is Virginia Water Radio for the week of September 10, 2018.

This week, we feature a Virginia singer/songwriter’s music about his time, and time in general, on one of the Commonwealth’s major rivers.  Have a listen for about 25 seconds.

MUSIC – ~ 27 sec - “Roads and boards, mills and mines used to line this stream--all reclaimed by floods and vines, foundations sprouting gums and pines. River flows on, so does time. Canoe splits Rappahannock water; dip my paddle, let it glide.”

You’ve been listening to part of “Solitude,” by Bob Gramann of Fredericksburg, on the 2000 album, “That Squirrel Song.”  This and other river-themed songs by Mr. Gramann come in large part from his years of paddling the upper Rappahannock River and its tributaries, in the area between the Blue Ridge and the Fall Line at Fredericksburg.  The part of “Solitude” you heard describes some of the changes along the Rappahannock wrought by time and the effects of water, weather, humans, and other organisms.  Some riverside changes—such as flood impacts—happen relatively quickly.  But typically change along a river takes its time, such as in the slow pace of plants growing over an abandoned building foundation.  Indeed, the expression “being on river time” is widely used to mean following a slower pace—or at least, a less-structured pace—than modern society often demands.

Slow or fast, and seen or unseen, Virginia’s rivers are shaped by unrelenting time, unceasing forces, and unstoppable change.  Thanks to Bob Gramann for permission to use this week’s music, and we close with about 35 more seconds of “Solitude.”

MUSIC – ~ 33 sec - “Rain and sleet, wind or heat, it’s all the same to me. Weather—you can never choose; each day that’s mine, that day I’ll use, to flee from time in my canoe, its bow splits Rappahannock water. Dip my paddle, let it fly.”

“Solitude,” from the 2000 album “That Squirrel Song,” is copyright by Bob Gramann, used with permission.  More information about Bob Gramann is available online at https://www.bobgramann.com/folksinger.html.

The following photos along the Rappahannock River in Virginia were taken by Bob Gramann (except as noted) and used with his permission.

Rappahannock River at the confluence with the Rapidan River (at the juncture of Culpeper, Spotsylvania, and Stafford counties), April 2004. 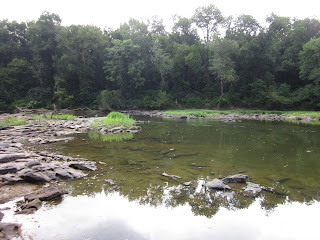 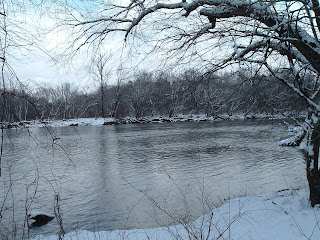 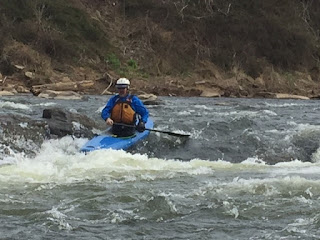 The following text was taken from the Virginia Department of Game and Inland Fisheries’ “Rappahannock River-Upper," online at https://www.dgif.virginia.gov/waterbody/rappahannock-river-upper/;

“The Rappahannock River flows from its origin at Chester Gap in Rappahannock County approximately 184 miles to the Chesapeake Bay.  The first 62 miles, from the headwaters to Mayfield Bridge (Fredericksburg), are designated State Scenic River.  The river has a watershed of approximately 2,715 square miles, and average annual discharge near Fredericksburg is typically about 1,639 cubic feet per second (cfs).

“During Colonial days, the Rappahannock River was a major shipping artery for transporting tobacco, salted fish, iron ore, and grains.   The watershed supports a variety of land uses; largely agricultural in the upper watershed, with manufacturing, light industrial, and retail applications throughout.  Soil erosion is a problem in the upper watershed.  Runoff from the major tributaries (Rapidan and Hazel Rivers) leaves the Rappahannock muddy after even minor storm events.

“Access to the Rappahannock system (defined here as the Rapidan and Rappahannock Rivers) is fairly limited and primitive.   Established access points on the Rappahannock (traveling downstream) are at Kelly’s Ford (Route 672 off Route 651) in Culpeper County and Motts Landing (Route 618) in Spotsylvania County.  About 25 miles separates these canoe/Jon boat slides, and an overnight camp stop is nearly mandatory for those that float fish this reach.  Another access point is located on the Rapidan River at Elys Ford (Route 610) in Spotsylvania County about 14 miles upstream of Motts Landing. Access may also be gained via several non established points.  These consist of VDOT [Virginia Department of Transportation] right-of-ways along bridges (e.g., Route 522 on the Rapidan)….

“The Rappahannock River’s character changes abruptly in Fredericksburg at the fall line (the limit of tidal influence).   Above the fall line, the river is usually clear, swift, and dominant substrates are bedrock, boulder and cobble providing perfect habitat for smallmouth bass and related species.  However, below Route 1 the river is tidal, and the substrate is finer, dominated by sand; and the water is frequently murky.   Species composition shifts with habitat, and largemouth bass, catfish and anadromous species are more common in and below Fredericksburg.  Boaters and anglers can now navigate from upstream access points such as Motts Landing across the old Embrey Dam site and into the tidal waters adjacent to Fredericksburg.”

Cabins for You, “Gatlinburg [Tenn.] On River Time,” online at https://www.cabinsforyou.com/on-river-time.htm

On River Time, Birmingham, Ala., non-profit organization for “empowering children victims of abuse through flyfishing,” online at http://onrivertime.org/.

For More Information about the Rappahannock River

Virginia Studies Course
VS.1 – impact of geographic features on people, places, and events in Virginia history.

World Geography Course
WG.2 – how selected physical and ecological processes shape the Earth’s surface, including climate, weather, and how humans influence their environment and are influenced by it.
WG.3 – how regional landscapes reflect the physical environment and the cultural characteristics of their inhabitants.