All Web addresses mentioned were functional as of 8-31-18.

From the Cumberland Gap to the Atlantic Ocean, this is Virginia Water Radio for the week of September 3, 2018.  This week is a revised repeat of the episode from September 2, 2013.

This week, in honor of Labor Day, we feature a traditional tune associated with the river at the geographic heart of Appalachian coal mining and other hard work.  Have a listen for about 35 seconds.

You’ve been listening to part of “Sandy Boys,” performed by Sara Grey, Kieron Means, and Ben Paley on the 2009 album also titled “Sandy Boys,” from Fellside Records.  The album’s liner notes state that the title refers to farmers and loggers in the valley, or watershed, of the Big Sandy River.  That river begins with tributaries in Virginia, West Virginia, and Kentucky and ends at its confluence with the Ohio River in Catlettsburg, Kentucky.

For centuries, the Big Sandy valley has served as a main transportation corridor for this difficult-to-reach southern Appalachian region—for walkers and horses, boats, railroads, and finally automobiles.  It’s also been the center of two natural-resource based industries—first timbering, then coal-mining—that underlie the region’s complicated history.  That history has featured tradition and change, labor and capital, unions and management, and poverty and prosperity—all part of the lives and labor of Big Sandy boys, girls, women, and men.

Thanks to Sara Grey and Fellside Records for permission to use this week’s music.  We close with three sounds of people working—pressure-washing a building, limestone work by stone masons, and a freight train—followed by a few more seconds of “Sandy Boys.”   Happy Labor Day!

This episode revises and replaces Episode 177, 9-2-13, which has been archived. 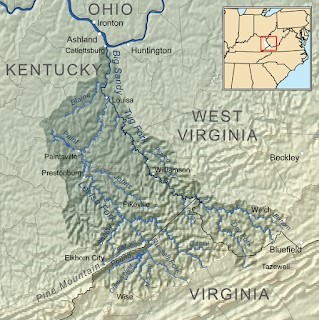 Big Sandy River watershed, showing its three main forks, the Levisa, Russell, and Tug. Map by Kmusser via Wikimedia Commons, accessed at https://en.wikipedia.org/wiki/Big_Sandy_River_(Ohio_River_tributary)#/media/File:Bigsandyrivermap.png. Made available for public use according to Creative Commons License 3.0 (http://creativecommons.org/licenses/by-sa/3.0). 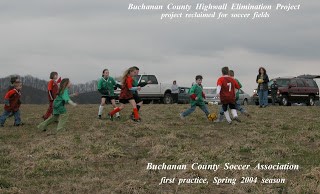 Modern-day “Sandy boys” and “Sandy girls” play on a soccer field created on a reclaimed abandoned coal-mine (AML) site in Buchanan County, Virginia, 2004.  This area is on the watershed divide between the Levisa Fork and Russell Fork tributaries of the Big Sandy River. Photo courtesy Richard Davis, Virginia Department of Mines, Minerals and Energy, received September 2013. 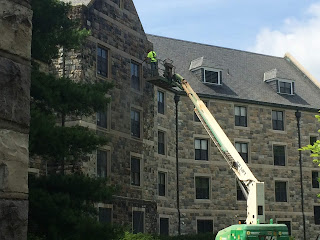 Worker pressure-washing a building on the Virginia Tech campus in Blacksburg, June 2018.

The following is taken from the U.S. Department of Labor, “History of Labor Day,” online at https://www.dol.gov/general/laborday/history.

Labor Day: What it Means
“Labor Day, the first Monday in September, is a creation of the labor movement and is dedicated to the social and economic achievements of American workers. It constitutes a yearly national tribute to the contributions workers have made to the strength, prosperity, and well-being of our country.

Labor Day Legislation
“The first governmental recognition came through municipal ordinances passed in 1885 and 1886. From these, a movement developed to secure state legislation. The first state bill was introduced into the New York legislature, but the first to become law was passed by Oregon on February 21, 1887. During 1887 four more states — Colorado, Massachusetts, New Jersey, and New York — created the Labor Day holiday by legislative enactment. By the end of the decade Connecticut, Nebraska, and Pennsylvania had followed suit. By 1894, 23 more states had adopted the holiday, and on June 28, 1884, Congress passed an act making the first Monday in September of each year a legal holiday in the District of Columbia and the territories.

Founder of Labor Day
“More than a century after the first Labor Day observance, there is still some doubt as to who first proposed the holiday for workers. Some records show that Peter J. McGuire, general secretary of the Brotherhood of Carpenters and Joiners and a co-founder of the American Federation of Labor, was first in suggesting a day to honor those "who from rude nature have delved and carved all the grandeur we behold."
“But Peter McGuire's place in Labor Day history has not gone unchallenged. Many believe that Matthew Maguire, a machinist, not Peter McGuire, founded the holiday. Recent research seems to support the contention that Matthew Maguire, later the secretary of Local 344 of the International Association of Machinists in Paterson, N.J., proposed the holiday in 1882 while serving as secretary of the Central Labor Union in New York. What is clear is that the Central Labor Union adopted a Labor Day proposal and appointed a committee to plan a demonstration and picnic.

A Nationwide Holiday
“The form that the observance and celebration of Labor Day should take was outlined in the first proposal of the holiday — a street parade to exhibit to the public "the strength and esprit de corps of the trade and labor organizations" of the community, followed by a festival for the recreation and amusement of the workers and their families. This became the pattern for the celebrations of Labor Day. Speeches by prominent men and women were introduced later, as more emphasis was placed upon the economic and civic significance of the holiday. Still later, by a resolution of the American Federation of Labor convention of 1909, the Sunday preceding Labor Day was adopted as Labor Sunday and dedicated to the spiritual and educational aspects of the labor movement.
“The character of the Labor Day celebration has undergone a change in recent years, especially in large industrial centers where mass displays and huge parades have proved a problem. This change, however, is more a shift in emphasis and medium of expression. Labor Day addresses by leading union officials, industrialists, educators, clerics and government officials are given wide coverage in newspapers, radio, and television.
“The vital force of labor added materially to the highest standard of living and the greatest production the world has ever known and has brought us closer to the realization of our traditional ideals of economic and political democracy. It is appropriate, therefore, that the nation pays tribute on Labor Day to the creator of so much of the nation's strength, freedom, and leadership—the American worker.”

Sara Grey, album notes for “Sandy Boys” online at http://www.saragrey.net/Recordings/SandyBoys/SandyBoysNotes.htm. This site includes the “Sandy Boys” album cover photograph of a commercial boat on the Big Sandy River in 1904.

For More Information on Labor Day

All Water Radio episodes are listed by category at the Index link above (http://www.virginiawaterradio.org/p/index.html).  See particularly the “Rivers, Streams, and Other Surface Waters” subject category.

United States History to 1865 Course
USI.2 – major land and water features of North America, including their importance in history.
USI.5 – factors that shaped colonial America and conditions in the colonies, including how people interacted with the environment to produce goods and service.

World Geography Course
WG.2 - how selected physical and ecological processes shape the Earth’s surface, including climate, weather, and how humans influence their environment and are influenced by it.
WG.3 - how regional landscapes reflect the physical environment and the cultural characteristics of their inhabitants.
WG.4 - types and significance of natural, human, and capital resources.