All Web addresses mentioned were functional as of 5-4-18.

From the Cumberland Gap to the Atlantic Ocean, this is Virginia Water Radio for the week of May 7, 2018.  This is the first of a series of four revisits to previous episodes on the watershed connections of western Virginia rivers.

This week, we feature an old-time fiddle tune named for a trio of rivers that connect Virginia to the waters of neighboring Appalachian states, the Ohio River, the Mississippi River, and—far downstream—the Gulf of Mexico.  Have a listen for about 25 seconds.

You’ve been listening to part of “Three Forks of Sandy,” on the 2009 album “Bobby Taylor Plays Ragged Shirt and Other Favorite Fiddle Tunes from West Virginia,” on Vigortone Records.  The tune is attributed to Ed Haley, a West Virginia native who settled in Kentucky and became a well-known traditional fiddler in the early-to-mid 1900s, despite having lost his eyesight at age three.

The tune’s name refers to the three forks of the Big Sandy River: Levisa, Russell, and Tug, all of which have headwaters in southwestern Virginia.  Near Pikeville, Kentucky, the Russell flows into the Levisa, which in turn joins the Tug to form the Big Sandy River along the Kentucky-West Virginia border.  Near Catlettsburg, Kentucky, where Ed Haley settled, the Big Sandy joins the Ohio River, one of the major tributaries of the Mississippi and eventually the Gulf of Mexico.

Thanks to Bobby Taylor for permission to use this week’s music, and we close with a few more seconds of “Three Forks of Sandy.”

“Three Forks of Sandy” and “Bobby Taylor Plays Ragged Shirt and Other Favorite Fiddle Tunes from West Virginia” are copyright by Bobby Taylor and Vigortone Records, used with permission.  Information about Bobby Taylor is available online at his Facebook site, https://www.facebook.com/bobby.taylor.12.

Click here if you’d like to hear the full version (1 min./11 sec.) of the “Cripple Creek” arrangement/performance by Stewart Scales that opens and closes this episode.  Information about Mr. Scales and the group New Standard, with which Mr. Scales plays, is available online at http://newstandardbluegrass.com.

Virginia’s major river basins.  The Virginia portion of the Big Sandy River watershed is shown in green at the lower left.  Map from Virginia Department of Conservation and Recreation, http://www.dcr.virginia.gov/soil-and-water/wsheds. 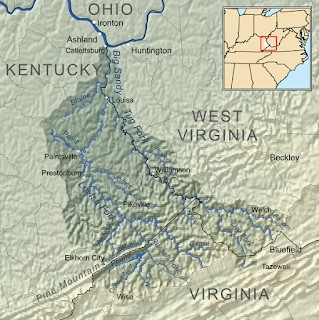 Big Sandy River watershed, showing its three main forks, the Levisa, Russell, and Tug. Map by Kmusser via Wikimedia Commons, accessed
at https://en.wikipedia.org/wiki/Big_Sandy_River_(Ohio_River_tributary)#/media/File:Bigsandyrivermap.png. Made available for public use according to Creative Commons License 3.0 (http://creativecommons.org/licenses/by-sa/3.0).

World Geography Course
WG.3 - how regional landscapes reflect the physical environment and the cultural characteristics of their inhabitants.
WG.5 – regions of United States and Canada.