All Web addresses mentioned were functional as of 5-4-18.

From the Cumberland Gap to the Atlantic Ocean, this is Virginia Water Radio for the week of May 14, 2018.  This is the second of a series of four revisits to previous episodes on the watershed connections of western Virginia rivers.

This week, we feature a music selection honoring a southwestern Virginia mountain and a nearby water-carved landmark, both within a major river basin located, in turn, within the watersheds of the Mississippi River and Gulf of Mexico.  Have a listen for about 30 more seconds.

You’ve been listening to part of “Clinch Mountain Quickstep,” performed by Timothy Seaman and Phillip Skeens on the 2002 album, “Sycamore Rapids,” from Pine Wind Music.   Clinch Mountain is a prominent ridge stretching across five southwestern Virginia counties and into Tennessee.   It forms the divide between the watersheds of the Clinch River to the north and the Holston River to the south, two of Virginia’s major tributaries to the Upper Tennessee River.  The Tennessee River eventually flows into the Ohio River at Paducah, Kentucky, and the Ohio continues on to the Mississippi.

Back on the Clinch River, the Virginia Department of Conservation and Recreation has described that area as “one of the greatest hotspots for biodiversity in North America,” containing over 120 fish species and “more species of endangered and rare freshwater mussels than anywhere else in the world.”  This week’s “Clinch Mountain Quickstep” was recorded to honor one of the area’s landmarks: Natural Tunnel State Park.  The park is named after an 800-foot long, 100-foot high tunnel carved over hundreds of thousands of years by groundwater and by Stock Creek, a Clinch River tributary.

Thanks to Timothy Seaman for permission to use this week’s music, and we close with a few more seconds of “Clinch Mountain Quickstep.”

Click here if you’d like to hear the full version (2 min./22 sec.) of the “Shenandoah” arrangement/performance by Ben Cosgrove that opens and closes this episode.  Information on Mr. Cosgrove i s available online at http://www.bencosgrove.com.

Virginia’s major river basins. The Virginia portions of the upper Tennessee watershed are shown at the lower left: light yellow for the Clinch-Powell watershed, and purple for the Holtson watershed. Map from Virginia Department of Conservation and Recreation, http://www.dcr.virginia.gov/soil-and-water/wsheds. 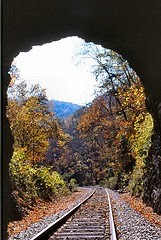 View from inside Natural Tunnel in Scott County, Virginia. Photo courtesy of the Virginia Department of Conservation and Recreation, accessed at http://www.flickr.com/photos/vadcr/sets/72157603427187845/detail/?page=2. 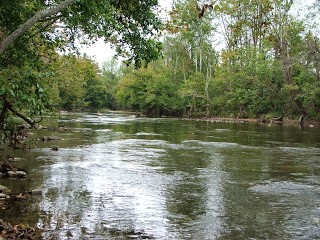 The North Fork Holston River, shown here in Washington County, Virginia, in April 2010, flows along the southern side of Clinch Mountain in Smyth and Washington counties. 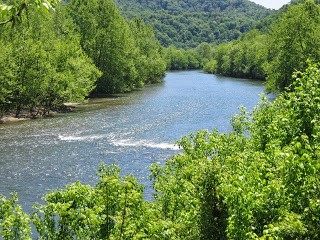 ADDITIONAL INFORMATION ABOUT THE CLINCH RIVER

“The Clinch River is the crown of the mountain empire flowing southwestward from its origin near the town of Tazewell, the Clinch travels some 135 miles, reaching portions of Tazewell, Russell, Wise, and Scott counties on its way to the Tennessee state line.  In a cast of Virginia rivers that portray history and natural wealth, the Clinch has a story and a character all its own.

“The Clinch River, which was named after on otherwise forgotten explorer, played a major role in the exploration and settlement of Southwest Virginia.  Many early settlers made their homes along its eastern shore, while other crossed the formidable flow and explored the wilderness beyond its banks. Probably the most famous explorer to pace the banks of the Clinch and challenge its currents was Daniel Boone.  Boone resided for some time near Castlewood, and negotiated the river during his many trips through Southwest Virginia.  Today, towns and settlements along its course bear names which are evidence of their historical roles.  Places like Blackford, Nash’s Ford, Fort Blackmore, and Speer’s Ferry are a few examples.

“Although the landscapes have changed along the Clinch, the rugged and unique river still remains.  The river does show signs of human alteration, however.  To prevent flooding in the town of Saint Paul, the river was re-routed around the town.  Observant floaters will note that the present river channel around the south side of Saint Paul was blasted out of solid rock.  Two major fish kills have occurred in the last 30 years.  These fish kills were the result of toxic spills that originated near Carbo.  The river has recovered admirably from the fish kills of the past, and an incredible diversity of life is now present in and around the river.

“The Clinch supports a unique assemblage of aquatic life.  The river is home to about 50 species of mussels, which is more than any other river in the world and over 100 species are non-game fish – minnows and darters that sport brilliant colors and play a vital role in the survival of other fish and mussel species.  But, the variety of sport fish is what makes the Clinch a great destination for anglers.”

Virginia Department of Conservation and Recreation, “Clinch River: Global Hotspot for Biodiversity and Endangered Species,” starting at page 22 in “Healthy Waters” (undated), online (as a PDF) at www.dcr.virginia.gov/natural-heritage/document/healthywatersbook.pdf.

Life Science Course
LS.9 - adaptations for particular ecosystems’ biotic and abiotic factors, including characteristics of land, marine, and freshwater environments.
LS.10 - changes over time in ecosystems, communities, and populations, and factors affecting those changes, including climate changes and catastrophic disturbances.

World Geography Course
WG.3 – how regional landscapes reflect the physical environment and the cultural characteristics of their inhabitants.
WG.5 – regions of United States and Canada.