From the Cumberland Gap to the Atlantic Ocean, this is Virginia Water Radio for the week of August 20, 2012.

This week, we feature sounds that answer this riddle: What water phenomenon makes no sound but always says “mystery”?  Have a listen for about 30 seconds.

You’ve been listening to a ship’s fog horn, a National Weather Service dense-fog advisory, and the fog horn at the U.S. Route 50/Chesapeake Bay Bridge.  Mysterious in movies and dangerous on roadways and shipping channels, fog’s silent movement was described by poet Carl Sandburg as “coming on little cat feet.”  Fog actually comes in when invisible water vapor in air becomes cooled enough to condense into visible, liquid water suspended close to the ground—essentially a very low-lying cloud.  A key fog factor is the dew point, the temperature to which air of a given humidity and pressure must be cooled for clouds and fog to form.  Temperature, moisture level, and pressure all interact to determine whether fog creeps in near water bodies, in cool valleys, on ridgetops, on mysterious city streets, or on your daily commuting route. 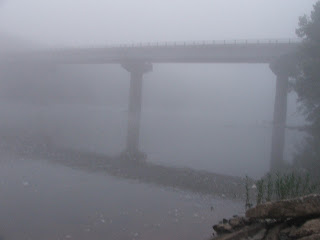 Acknowledgments: The ship fog horn (first sound) was recorded by “inchadney” on June 3, 2012, and acquired from the sound-sharing Web site, http://www.Freesound.org.  The National Weather Service (NWS) special weather statement was recorded on August 20, 2012, from NWS Weather Radio from Blacksburg, Virginia.  The bridge fog horn (third sound) is from the Chesapeake Bay Bridge (U.S. 50), recorded on Kent Island, Maryland, February 29, 2012.  “Fog” by Carl Sandburg was originally published in 1916 as part of Chicago Poems (1916), by Henry Holt Co. (New York) and republished in 2000 by Bartleby (New York); accessed online at http://www.bartleby.com/165/, 8/20/12.

Sources:  Information on fog and related phenomena was taken from the National Weather Service/Eastern Region Headquarters Glossary, online at http://www.erh.noaa.gov/box/glossary.htm, 8/20/12.  Following are that glossary’s definitions of several fog-related terms:

Advection Fog- a type of fog that results from the advection of moist air over a cold surface and the cooling of the air to its dew point that follows; this type of fog is most common in coastal regions.

Dense Fog- a fog in which the visibility is less than one-quarter mile.

Dew- Moisture from water vapor in the air that has condensed on objects near the ground, whose temperatures have fallen below the dew point temperature.

Dew Point- The temperature to which the air must be cooled for water vapor to condense and form fog or clouds.

Fog- Water that has condensed close to ground level, producing a cloud of very small droplets that reduces visibility to less than one km (three thousand and three hundred feet).

Ground Fog- Shallow fog (less than twenty feet deep) produced over the land by the cooling of the lower atmosphere as it comes in contact with the ground.  Also known as radiation fog.

Ice Fog- A suspension of numerous minute ice crystals in the air, or water droplets at temperatures below 0 Celsius, based at the Earth's surface, which reduces horizontal visibility.  Usually occurs at -20F and below.

Relative Humidity- The amount of water vapor in the air, compared to the amount the air could hold if it was totally saturated (expressed as a percentage).

Steam fog- Fog that is formed when water vapor is added to air which is much colder than the vapor's source.  This is most common when very cold air drifts across relatively warm water.