All Web addresses mentioned were functional as of 2-14-20.

From the Cumberland Gap to the Atlantic Ocean, this is Virginia Water Radio for the week of February 17, 2020.

This week, that ship’s horn opens an episode about an atmospheric event that’s often perceived as mysterious and is, in fact, often dangerous.  Have a listen for about 40 seconds to the ship’s horn again, followed by two additional mystery sounds, and see if you can guess this soundless water and weather phenomenon.

2) National Weather Service dense-fog advisory on August 20, 2012: “Near zero conditions are being experiences on Interstate 77 near Fancy Gap, along and near mountain ridges and passes, and in some of the deeper mountain valleys.  Conditions in these areas are not likely to significantly improve until shortly after daybreak on Monday.  Motorists traveling through the area are urged to drive with low beams on, slow down, and provide additional time to reach their destination.”

If you guessed fog, you’re right!  After the ship’s foghorn, you heard an excerpt from a National Weather Service dense-fog advisory and then the foghorn at the U.S. Route 50/Chesapeake Bay Bridge in Maryland.

Mysterious in movies and potentially dangerous on roadways, shipping channels, and flight paths, fog’s silent movement was described by poet Carl Sandburg as “coming on little cat feet.”  Fog actually comes in when invisible water vapor in air becomes cooled enough to condense into visible, liquid water suspended close to the ground—essentially a very low-lying cloud.  A key factor is the dew point, the temperature to which air of a given moisture level and pressure must be cooled for fog, clouds, or precipitation to form.

Fog can form under various weather and landscape situations, resulting in the identification of several types of fog.  Six of those types are radiation fog, when land surfaces cool at night, in turn cooling moisture-laden air; mountain-valley fog, when cold air sinks into moisture-containing valleys; advection fog, when winds move moist air over a cold ground; steam fog, occurring over lakes in the fall; freezing fog, when water droplets from fog contact objects below the freezing point; and ice fog, occurring in polar regions.

Temperature, moisture level, air pressure, landscape topography, and winds all interact to determine whether fog creeps in on mysterious city streets or on the particular route you may be traveling.

Thanks to Freesound.org user inchadney for making the ship foghorn sound available for public use.  We close with about 20 seconds of music from a song whose title matches a color that fog frequently presents.  Here’s part of “Grey” by Blacksburg, Va., singer/songwriter Kat Mills.

The first sound was as a ship foghorn recorded by “inchadney” on June 3, 2012, accessed from Freesound.org online at https://freesound.org/people/inchadney/sounds/157284/, for public use under Creative Commons License 3.0/Attribution.

The second sound was part of a National Weather Service (NWS) special weather statement/dense-fog advisory from the August 20, 2012, NWS Weather Radio broadcast from Blacksburg, Virginia, from a recording of the broadcast made by Virginia Water Radio.

The third sound was the foghorn for the Chesapeake Bay Bridge on U.S. 50 in Maryland, recorded by Virginia Water Radio on Kent Island, Maryland, February 29, 2012.

“Grey,” from the 2006 album “Two,” is copyright by Kat Mills, used with permission.  More information about Kat Mills is available online at https://www.reverbnation.com/katmills. 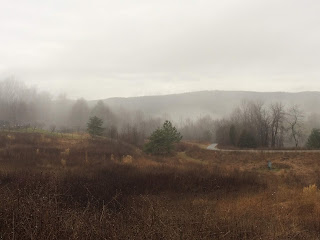 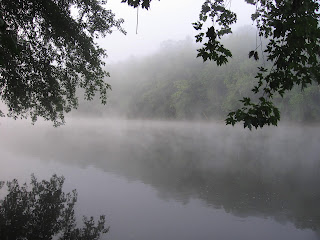 EXTRA INFORMATION ABOUT SOME TYPES OF FOG

The following information on several types of fog is quoted from the National Weather Service, “Fog Advisories,” online at https://www.weather.gov/safety/fog-ww.

“Advection fog forms as warmer, moist air moves over a cold ground.  The air is cooled to saturation by the cold from the ground below cooling the air above.  Unlike radiation fog [see below], advection fog may form under cloudy skies and with moderate to strong winds. Initial stability is relatively unimportant since low level cooling makes the air stable near the ground, allowing the fog to form.  Once formed, it may move across the landscape, pushed by low level winds.  Advection fog can last for several days and is most common in the U.S. on the West Coast.”

“Tiny, supercooled liquid water droplets in fog can freeze instantly on exposed surfaces when surface temperatures are at or below freezing.  Some surfaces that these droplets may freeze on include tree branches, stairs and rails, sidewalks, roads and vehicles.  Extreme caution should be taken if travel is necessary. Freezing fog can cause black ice to form on roadways. …For those flying, a thin layer of ice can form on aircraft, making flight very dangerous unless the aircraft is treated or has effective de-icing equipment.”

“…There are two ingredients that add to the formation of fog in areas of variable terrain.  First, overnight, the ground cools as the heat that was gathered from the sun’s rays during the day is released back into the air near the ground level.  The denser, cooler air on mountain-tops sinks into valleys, and collects there. Second, over the course of the night, the valley begins to fill from the bottom with cold layers of air.  This phenomenon is known as 'cold air drainage.'  This cooler air lowers the surrounding air temperatures closer to the dew point and subsequently saturation.  If there is sufficient moisture in the air, fog will begin to form in these valleys as the night progresses.  This type of fog is most commonly observed in the autumn and spring months, and is densest around sunrise when surface temperatures are often lowest.”

“Radiation fog is a very common type of fog throughout the United States.  It is most prevalent during the fall and winter. It forms overnight as the air near the ground cools and stabilizes.  When this cooling causes the air to reach saturation, fog will form.  Fog will first form at or near the surface, thickening as the air continues to cool.  The layer of fog will also deepen overnight as the air above the initial fog layer also cools.  As this air cools, the fog will extend upward.  The most favored areas for fog development are sheltered valleys where there is little to no wind and locations near bodies of water.  Wind would disrupt the formation of radiation fog.  Radiation fog is usually patchy, tends to stay in one place, and goes away the next day under the sun’s rays.  Thicker instances of radiation fog tend to form in valleys or over calm bodies of water.  A special kind of radiation fog, called 'tule' (TOO-lee) fog, occurs each winter in the Central Valley of California.  The combination of a cool, moist layer of air from the Pacific close to the surface, clear skies above, and light winds results in exceptionally thick fog on many nights from late October through February.  This phenomenon is often visible on satellite.”

“Super fog forms when a mixture of smoke and moisture released from damp smoldering organic material such as brush, leaves and trees, mixes with cooler, nearly saturated air.  Visibility is lowered to less than 10 feet.  Under light wind conditions, super fog meanders through low terrain areas such as creek beds or drainage ditches.  Super fog can be very dangerous when present over highways, and has been the cause of several large, multi-vehicle pileups.”

All Water Radio episodes are listed by category at the Index link above (http://www.virginiawaterradio.org/p/index.html).  See particularly the “Weather/Climate/Natural Disasters” subject category.

Following are links to some other episodes on common weather phenomena.

Grades K-6 Matter Theme
6.6 – Properties of air (including pressure, temperature, and humidity) and structure/dynamics of earth’s atmosphere, including weather topics.

World Geography Course
WG.1 – skills for historical thinking, geographical analysis, economic decision-making, and responsible citizenship.
WG.2 – how selected physical and ecological processes shape the Earth’s surface, including climate, weather, and how humans influence their environment and are influenced by it.