From the Cumberland Gap to the Atlantic Ocean, this is Virginia Water Radio for the week of November 5, 2012.

This week, we feature famous music and a history mystery.  Have a listen for about 40 seconds, and see if you can guess how this well-known tune connects Virginia and water.

You’ve been listening to “Hail to the Chief,” played by the U.S. Army Band.  Since 1815 this tune has been used to honor U.S. presidents and announce their arrival.  Virginia is the birthplace of eight presidents, and bodies of water influenced the careers or administrations of each, as the following examples show.

George Washington made his home on the Potomac River and led famous Revolutionary War battles near the Hudson, Delaware, and York rivers;

Fourth president James Madison led the nation into war with Britain in 1812 over obstruction of shipping and capture of sailors.

Fifth president James Monroe stretched the country’s sphere of influence from the Atlantic to the Pacific by declaring in 1823 that the United States would tolerate no further European colonization in the Western Hemisphere.

Ninth president William Henry Harrison gained fame in the 1811 battle against Indian chieftain Tecumseh on the Tippecanoe River in the Indiana Territory.

Tenth president John Tyler’s administration negotiated the Webster-Ashburton treaty with Britain that established the international border through four of the Great Lakes and protected open navigation on those lakes;

Twelfth president Zachary Taylor’s administration negotiated the Clayton-Bulwer treaty with Britain that guaranteed access to for both countries to a contemplated canal across Central America between the Atlantic and Pacific oceans;

And 28th president Woodrow Wilson ordered several military and diplomatic actions in the Caribbean Sea, and he led the nation into its first war across the Atlantic Ocean, partially over actions by German submarines.

Like these Virginia presidents, whichever candidate is elected on November 6, 2012, will face serious challenges.  But they can be thankful they won’t be expected to match one famous Virginia president-and-water feat: George Washington’s legendary silver-dollar toss across the Rappahannock River! 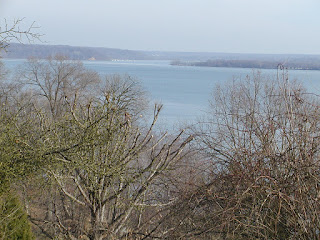 Acknowledgments: The version of “Hail to the Chief” used in this episode was by the U.S. Army Band “Pershing’s Own,” accessed at their Web site at http://www.usarmyband.com/audio/ceremonial_music_guide.html, 11/5/12.

Water Meetings and Other Events
For events related to Virginia's water resources, please visit the Quick Guide to Virginia Water–related Conferences, Workshops, and Other Events, online at http://virginiawaterevents.wordpress.com/.  The site includes a list of Virginia government policy and regulatory meetings occurring in the coming week.
Posted by Alan Raflo at 3:17 PM