Unless otherwise noted, all Web addresses mentioned were functional as of 10-30-20.

From the Cumberland Gap to the Atlantic Ocean, this is Virginia Water Radio for the week of November 2, 2020.  This episode is a revised version of an episode from November 2012.

This U.S. election week, we feature famous music and a history mystery.  Have a listen for about 40 seconds, and see if you know how this song connects to eight historic Virginians who all had important career connections to water.

If you guessed, the U.S. presidency, you’re right!  You’ve been listening to “Hail to the Chief,” played by the U.S. Army Band.  Since 1815 this song has been used to announce and honor U.S. presidents.  Virginia is the birthplace of eight presidents, and water-based events and issues influenced the life and legacy of each, as the following examples show.

Prior to becoming the first president, George Washington recognized the importance of naval strategy in the Revolutionary War and led battles and movements involving various rivers, including the Hudson, Delaware, and York.

Fourth president James Madison led the United States into the War of 1812 with Britain in part over obstruction of shipping and capture of sailors.

Fifth president James Monroe stretched the country’s sphere of influence from the Atlantic to the Pacific by declaring in 1823 that the United States would not tolerate further European colonization in the Western Hemisphere.

Ninth president William Henry Harrison’s 1840 presidential campaign slogan, “Tippecanoe and Tyler, too,” was based on his military operations in 1811 against the Shawnees on the Tippecanoe River in Indiana Territory.

Tenth president John Tyler’s administration negotiated the 1842 Webster-Ashburton treaty with Britain, which established the international border through the Great Lakes, provided for open navigation in that area, and called for joint efforts by the two countries to suppress slave trading along the coast of Africa.

Twelfth president Zachary Taylor’s administration negotiated the 1850 Clayton-Bulwer treaty with Britain, which guaranteed access for both countries to any future canal across Central America between the Atlantic and Pacific oceans.

And twenty-eighth president Woodrow Wilson led the nation into World War I in large part over attacks in the Atlantic Ocean by German submarines on U.S. ships.

Water was an important part of the life story of these Virginia-born presidents.  Time will tell how that may also be true for the person steering the U.S. ship of state come January 20, 2021.

Thanks to the U.S. Army Band for making this week’s music available for public use, and we close with one more flourish from “Hail to the Chief.”

The version of “Four Ruffles and Flourishes, Hail to the Chief” heard in this episode is by the U.S. Army Band (“Pershing’s Own”), from the “Ceremonial Music Guide” online at https://www.usarmyband.com/watch-listen/ceremonial-music-guide.html. 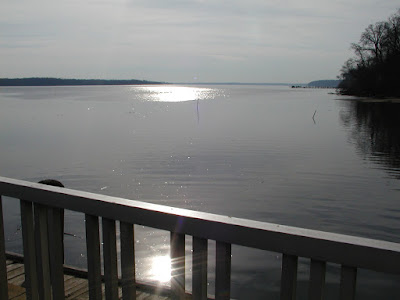 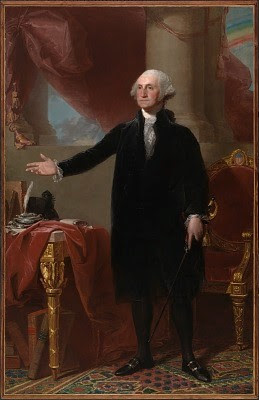 Official portrait of President George Washington, by Gilbert Stuart, 1796.  Image accessed from the National Portrait Gallery, Smithsonian Institution, online at https://npg.si.edu/object/npg_NPG.2001.13?destination=portraits.  Other presidential portraits and images in the National Portrait Gallery’s “America’s Presidents” exhibition are available online at this link.

Sam Bateman, “Freedom of navigation and the Law of the Sea; Rights and freedoms in the South China Sea –A practical perspective,” Asia and the Pacific Policy Society Policy Forum, January 21, 2020, online at https://www.policyforum.net/freedom-of-navigation-and-the-law-of-the-sea/.

Wilbur Devereux Jones, “The Influence of Slavery on the Webster-Ashburton Negotiations,” Journal of Southern History, Vol. 22, No. 1 (Feb. 1956), pages 48-58, accessed online at https://www.jstor.org/stable/2955259?seq=1#metadata_info_tab_contents (subscription may be required for access).

Bil Gilbert, “The Dying Tecumseh and the Birth of a Legend,” Smithsonian Magazine, July 1995, online at https://www.smithsonianmag.com/history/the-dying-tecumseh-97830806/.

Abigail Tucker, “Why Do We Play ‘Hail to the Chief’ for the President?,” Smithsonian Magazine, January 2017, online at https://www.smithsonianmag.com/history/why-play-hail-to-chief-president-180961428/.

Virginia Studies Course
VS.5 – role of Virginia in the American Revolution.