Unless otherwise noted, all Web addresses mentioned were functional as of 5-8-20.

From the Cumberland Gap to the Atlantic Ocean, this is Virginia Water Radio for the week of May 11, 2020.

This week, that opening of “All Creatures Were Meant to Be Free,” by Bob Gramann of Fredericksburg, Va., sets the stage for an episode filled with mystery sounds of creatures related to water and found in Virginia.  This episode is designed especially for Virginia K-12 students whose science curriculum includes learning about the Commonwealth’s living creatures, also called organisms.  I’ll play a few seconds of sounds of 12 animals, ranging from tiny to tremendously large.  After each one, I’ll tell what the animal is and a little bit about its occurrence or habitat in Virginia. I hope you know ‘em all!  Here goes.

One.  SOUND - ~ 4 sec.  Several species of mosquitoes are common in Virginia and breed in a variety of still-water habitats.

Three.  SOUND - ~5 sec.  The Atlantic Croaker, one of many fish species known to make sounds, occurs along Virginia’s coastline and in the Chesapeake Bay in warm weather.

Four.  SOUND - ~ 4 sec.  Gray Treefrogs are a common and sometimes loud amphibian found throughout [much of] Virginia.

Five.  SOUND - ~ 5 sec.  American Toad breeding in Virginia starts between March and April in temporary pools or ponds, where males advertise to females with long trills.

Six.  SOUND - ~7 sec.  The American Bullfrog is Virginia’s largest frog, found all over the Commonwealth in ponds, lakes, and still-water sections of streams.

Eight.  SOUND - ~6 sec.  The Laughing Gull is one of 16 gull species whose occurrence has been documented in Virginia, out of 20 gull species known in North America.

Nine.  SOUND - ~4 sec.  The Red-winged Blackbird is often seen, and distinctively heard, around ponds, marshes, streams, and other wet areas.

Ten.  SOUND - ~6 sec.  Populations of the Bald Eagle have recovered dramatically in recent decades and our national symbol can now often be spotted along Virginia’s rivers.

Eleven.  SOUND - ~3 sec.  American Beavers, now found across Virginia after reintroduction starting in the 1930s, smack their paddle-like tail on the water as a defensive behavior to protect a colony’s territory.

And twelve.  SOUND - ~8 sec.  The Humpback Whale, which can be seen during migrations along Virginia’s coastline in winter, uses it song for breeding or other communication.

Thanks to Freesound.org for the mosquito sound; to Rodney Rountree for the Atlantic Croaker sound; to the Virginia Department of Game and Inland Fisheries and to Lang Elliott for the bullfrog sound; to Lang Elliott again for the Laughing Gull and Bald Eagle sounds; and to the National Park Service for the whale sound.  Thanks also to Bob Gramann for permission to use his music.

And thanks finally to all Virginia students for their efforts to keep learning through an unusually challenging spring 2020.

“All Creatures Were Meant to Be Free,” from the 1995 album “Mostly True Songs,” is copyright by Bob Gramann, used with permission.  More information about Bob Gramann is available online at https://www.bobgramann.com/.  This music was used by Virginia Water Radio previously in Episode 465, 3-25-19.

The Atlantic Croaker sound was from Rodney Rountree’s “Fish and Other Underwater Sounds” Web site at http://www.fishecology.org/soniferous/justsounds.htm; used with permission.

The Gray Treefrog sound was recorded by Virginia Water Radio in Blacksburg, Va., on June 10, 2011.

The American Toad sound was recorded by Virginia Water Radio in Blacksburg, Va., on April 3, 2017.

The American Bullfrog sound was from “The Calls of Virginia Frogs and Toads” CD, copyright 2008 by the Virginia Department of Game and Inland Fisheries and Lang Elliott/NatureSoundStudio, used with permission.  Lang Elliott’s work is available online at the “Music of Nature” Web site, http://www.musicofnature.org/.

The Belted Kingfisher sound was recorded by Virginia Water Radio in Blacksburg, Va., on January 19, 2018.

The Red-winged Blackbird sound was recorded by Virginia Water Radio in Blacksburg, Va., on April 9, 2017.

The American Beaver sound was from a video recording by Virginia Water Radio at Toms Creek in Heritage Park in Blacksburg, Va., on June 2, 2012.  A 23-second segment of that video is available on YouTube at http://www.youtube.com/watch?v=mulEJhKGhl0.

The Humpback Whale sound was taken from a National Park Service recording (“Humpback Whales Song 2”) made available for public use on the “Community Audio” page of the Internet Archive Web site, at http://www.archive.org/details/HumpbackWhalesSongsSoundsVocalizations. 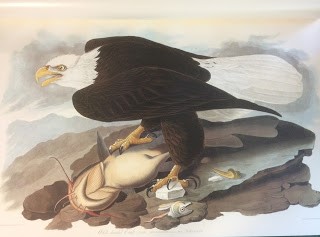 White-headed Eagle (a name formerly used for the Bald Eagle) painting originally published between 1827 and 1838 by John James Audubon in Birds of America, Plate XXXI (31), as reprinted in 1985 by Abbeville Press, New York.  The painting includes what Audubon called a Yellow Catfish caught by the bird.  Photo taken June 29, 2017, from the reprint copy (no. 6 of 350 copies printed in 1985) owned by Special Collections of Virginia Tech Libraries.  Virginia Water Radio thanks Special Collections for permission to photograph their copy and for their assistance.  Information about Birds of America is available from the National Audubon Society, online at https://www.audubon.org/birds-of-america.

Robert A. Blaylock, The Marine Mammals of Virginia (with notes on identification and natural history), Virginia Institute of Marine Science, 1985; online (as a PDF) at https://www.vims.edu/GreyLit/VIMS/EdSeries35.pdf.

Virginia Department of Game and Inland Fisheries (VDGIF), “Virginia is for Frogs,” online at https://www.dgif.virginia.gov/wildlife/virginia-is-for-frogs/.

Virginia Herpetological Society, online at http://www.virginiaherpetologicalsociety.com/index.html.  Herpetology is the study of amphibians and reptiles.

Virginia Society of Ornithology, online at http://www.virginiabirds.org/.  The Society is a non-profit organization dedicated to the study, conservation, and enjoyment of birds in the Commonwealth.

All Water Radio episodes are listed by category at the Index link above (http://www.virginiawaterradio.org/p/index.html).  See particularly the following subject categories: Amphibians, Birds, Fish, Insects, and Mammals.

Following are links to other episodes about the creatures featured in this episode.