Unless otherwise noted, all Web addresses mentioned were functional as of 3-27-20.

From the Cumberland Gap to the Atlantic Ocean, this is Virginia Water Radio for the week of March 30, 2020. This is a revised version of an episode from April 2013.

This week, we feature a feathered mystery sound, chosen just for the upcoming April Fools’ Day.  Have a listen for about 10 seconds to sounds resembling those that often follow a funny Fool’s Day trick, and see if you know the group of shorebirds to which this species belongs.  And here’s a hint: you might hear sounds like these on April Fools’ Day if you’re gull-ible.

If you guessed gulls, you’re right.  You heard the sounds of a Laughing Gull, in a recording by Lang Elliott, from the Stokes Field Guide to Bird Songs.

The Laughing Gull is one of 16 gull species whose occurrence has been documented in Virginia, out of 20 gull species known in North America.  Twelve of those species—with interesting names like Bonaparte’s, Franklin’s, Iceland, and Ivory gulls—are relatively rare visitors to the Commonwealth.  Four species—the Great Black-backed Gull, Herring Gull, Laughing Gull, and Ring-billed Gull—are fairly common around Virginia’s coastal waters, with Herring, Laughing, and Ring-billed gulls found at times farther inland around freshwaters or sources of food.  Besides their distinctive sounds, which can vary considerably, gulls generally are known for gathering in groups for nesting and feeding, for their hovering ability, and for scavenging food around fishing boats, plowed fields, parking lots, and landfills.

About the Laughing Gull, 19th-century naturalist John James Audubon [who also called this bird the Black-headed Gull] reported an amusing feeding anecdote, excerpted here as follows: “On the 10th of May, 1832, it was my good fortune to be snugly on board the ... revenue cutter Marion.  The Gulls that laughed whilst our anchors were swiftly descending...were all busily engaged on wing, hovering here and there around the Brown Pelicans, intent on watching their plunges into the water…. As…the Pelican went down headlong, so gracefully followed the…Gull, which, on the brown bird's emerging, alighted nimbly on its very head, and with a gentle stoop instantly snatched from the mouth of its purveyor the glittering fry…!”

Thanks to Lang Elliott for permission to use this week’s sounds, and we let a Laughing Gull have the last call.

Virginia Water Radio is produced by the Virginia Water Resources Research Center, part of Virginia Tech’s College of Natural Resources and Environment.   For more Virginia water sounds, music, or information, visit us online at virginiawaterradio.org, or call the Water Center at (540) 231-5624.  Thanks to Stewart Scales for his banjo version of Cripple Creek to open and close this show.  In Blacksburg, I’m Alan Raflo, thanking you for listening, and wishing you health, wisdom, and good water. 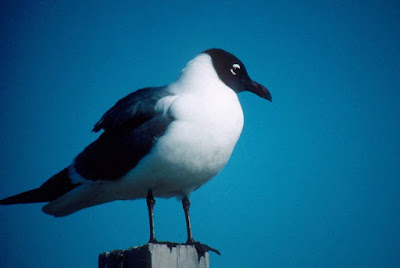 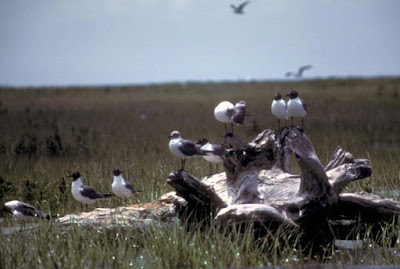 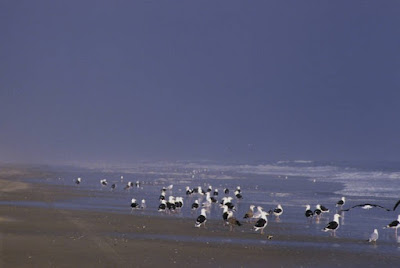 Great Black-backed Gulls at Back Bay National Wildlife Refuge in Virginia.  Photo by Donna A. Dewhurst, made available for public use at the U.S. Fish and Wildlife Service’s National Digital Library, http://digitalmedia.fws.gov/cdm/; specific URL for the photo is https://digitalmedia.fws.gov/digital/collection/natdiglib/id/3068/rec/1, as of 3-29-20.

EXTRA INFORMATION ABOUT GULLS IN VIRGINIA

Following are 16 species of gulls whose occurrence in Virginia has been documented, according to the Virginia Department of Game and Inland Fisheries, “Fish and Wildlife Information Service,” online at http://vafwis.org/fwis/?Title=VaFWIS+Species+Information+By+Name&vUT=Visitor. Information on 16 species of gulls found in Virginia is at this link, as of 3/27/20.  The scientific name for each species is in parenthesis.

John James Audubon, “Black-headed Gull” (the current Laughing Gull, Leucophaeus atricilla, formerly Larus atricilla), in Birds of America, Plate 314, accessed from the Audubon Society, online at https://www.audubon.org/birds-of-america/black-headed-gull.  This is the source of the Audubon quote in the audio.  The complete passage is as follows: “On the 10th of May, 1832, it was my good fortune to be snugly on board the "Lady of the Green Mantle," or, in other words, the fine revenue cutter Marion.  The Gulls that laughed whilst our anchors were swiftly descending towards the marvellous [sic] productions of the deep, soon had occasion to be sorrowful enough.  As they were in great numbers, officers and men, as well as the American woodsman, gazing upon them from the high decks of the gallant bark, had ample opportunities of observing their motions.  They were all busily engaged on wing, hovering here and there around the Brown Pelicans, intent on watching their plunges into the water, and all clamorously teasing their best benefactors.  As with broadly extended pouch and lower mandible, the Pelican went down headlong, so gracefully followed the gay rosy-breasted Gull, which, on the brown bird's emerging, alighted nimbly on its very head, and with a gentle stoop instantly snatched from the mouth of its purveyor the glittering fry that moment entrapped!”

Virginia Department of Game and Inland Fisheries, “Fish and Wildlife Information Service,” online at http://vafwis.org/fwis/?Title=VaFWIS+Species+Information+By+Name&vUT=Visitor.  Information on 16 species of gulls documented in Virginia is at this link, as of 3/27/20.

Virginia Society of Ornithology, online at http://www.virginiabirds.org/.  The Society is a non-profit organization dedicated to the study, conservation, and enjoyment of birds in the Commonwealth.

Xeno-canto Foundation Web site, online at http://www.xeno-canto.org/.  This site provides bird songs from around the world.

Following are links to some other episodes on shorebirds.