Episode 488 (9-2-19): The American Oystercatcher is a Shellfishing Specialist

Unless otherwise noted, all Web addresses mentioned were functional as of 8-30-19.

From the Cumberland Gap to the Atlantic Ocean, this is Virginia Water Radio for the week of September 9, 2019.

This week, that excerpt of “The Oystermen’s Ball,” by Bob Michel, opens an episode on a bird known for its association with oysters and other shellfish.  Have a listen for about 10 seconds to the following mystery sound, and see if you can guess this bird.  And here’s a hint: catch a key word in the title of the music you just heard.

This large bird inhabits beaches, mud flats, sand dunes, salt marshes, and dredge-spoil islands.  There, in falling or low tides, it finds the shellfish—particularly oysters, clams, and mussels, collectively known as bivalve mollusks—on which oystercatchers are adapted to feed.  An oystercatcher can use its distinctive, long, red-orange bill in various ways to get prey, including probing in the sand; stabbing the bill quickly inside a partially opened bivalve to cut the muscle that closes the two shell valves; and using the bill as a hammer to break open a closed shell.  According to the Cornell Lab of Ornithology, though, oystercatchers sometimes get caught by a bivalve closing its shell on the bird’s bill, threatening drowning the bird when high tide returns.

Oystercatchers also have a special courting ritual, known as “piping.”  The behavior typically involves two birds running beside one another, bobbing their heads up and down, and making loud calls.  The birds often also take flight in tandem, and that may attract other pairs of birds into what is sometimes called a piping “tournament” or “ceremony.”

The American Oystercatcher is distinctive in its colors, courtship, and prey-catching.  Here’s a 19th-Century take on that distinctiveness, by John James Audubon: “Shy, vigilant, and ever alert, the Oyster-Catcher walks with a certain appearance of dignity, greatly enhanced by its handsome plumage and remarkable bill.”

Virginia Water Radio is produced by the Virginia Water Resources Research Center, part of Virginia Tech’s College of Natural Resources and Environment. For more Virginia water sounds, music, or information, visit us online at virginiawaterradio.org, or call the Water Center at (540) 231-5624. Thanks to Stewart Scales for his banjo version of Cripple Creek to open and close this show. In Blacksburg, I’m Alan Raflo, thanking you for listening, and wishing you health, wisdom, and good water.

The American Oystercatcher sounds were from the Stokes Field Guide to Bird Songs-Eastern Region CD set, by Lang Elliott with Donald and Lillian Stokes (Time Warner Audio Books, copyright 1997), used with permission of Lang Elliott, whose work is available online at the “Music of Nature” Web site, http://www.musicofnature.org/.

“The Oystermen’s Ball," from the 2004 album of the same name, is copyright by Bob Michel, used with permission.  More information on Mr. Michel's music is available online at http://www.bobmichel.com/.  Excerpts from this song were also used in two Virginia Water Radio episodes on oysters in the Chesapeake Bay: Episode 279, 8/24/15 and Episode 280, 9/7/15. 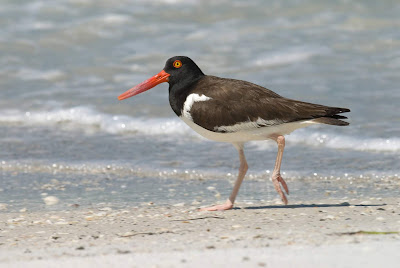 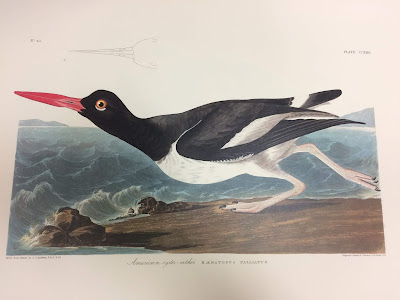 American Oyster-catcher painting by John James Audubon in Birds of America, plate CCXXIII (223), as reprinted in 1985 by Abbeville Press, New York.  Information about Birds of America is available from the National Audubon Society, online at http://www.audubon.org/birds-of-america; the Pied Oyster-catcher entry is online at https://www.audubon.org/birds-of-america/pied-oyster-catcher.  Photo above taken August 31, 2019, from the reprint copy (no. 6 of 350 copies printed in 1985) owned by Special Collections of Virginia Tech Libraries.  Virginia Water Radio thanks Special Collections for permission to photograph their copy and for their assistance.

EXTRA INFORMATION ABOUT THE AMERICAN OYSTERCATCHER

The scientific name of the American Oystercatcher is Haematopus palliatus.

Here are some points about the American Oystercatcher, excerpted from the Virginia Department of Game and Inland Fisheries, “Fish and Wildlife Information Service/Killdeer,” online at https://vafwis.dgif.virginia.gov/fwis/booklet.html?&bova=040114&Menu=_.Taxonomy&version=18138.

“The oystercatcher is a large, pied shorebird, 17-21 inches….   It has back and wing coverts of olive brown; upper tail coverts and base of tail of dusky brown; head, neck, and upper breast glossy black; lower breast and abdomen pure white. Its bill and iris are bright red; bill is long, laterally compressed and adapted to opening shellfish. Legs and feet are pale pink…  A bold white wing patch is visible during flight.”

“Pairs will nest on same territory as previous year.  Females arrive on territory up to 3 weeks before males, from last week of February to first week of March.  Pair formation will begin as soon as both sexes are on territory.  The breeding period extends from April to August. …

“Nest building, or scraping, begins several weeks before laying as a part of the courtship.  Both sexes participate in nest scraping though males typically do most of the work.  [Scrapes} are often decorated with pieces of shell. … This species is typically a solitary nester (but will roost and flock together).

“Nest sites are selected non-randomly with preferences for areas with more substrate, less vegetation, farther distance from water, and higher elevation.  In Virginia, nests have be found in dunes, salt marsh, dredge spoil, with spots often chosen on the edges of eroding high salt marsh on shell piles or rakes.  Typical substrate is soft on the surface with a firm underlying layer.

“Foraging takes place along mudflats and receding shore.  Oystercatchers stab prey through abductor muscle and pry open with bill.  This species will stab crabs and probe for worms, besides typical shellfish food items.  Foraging occurs well beyond limits of territory.”

John James Audubon, Birds of America, National Audubon Society, online at http://www.audubon.org/birds-of-america.  The quotation in the audio was taken from Audubon’s commentary for “The American Oyster-catcher, Haematopus palliatus, Plate CCXXIII.”

Cornell University Lab of Ornithology, “Merlin Photo ID.”  This application for mobile devices allows users to submit a bird photograph to get identification of the bird. Information is available online at http://merlin.allaboutbirds.org/.

Following are links to some other episodes on shorebirds.

Following are links to two previous episodes on oysters.