Unless otherwise noted, all Web addresses mentioned were functional as of 1-18-19.

From the Cumberland Gap to the Atlantic Ocean, this is Virginia Water Radio for the week of January 21, 2019.   The week we revisit a January 2012 episode about a bird known as a symbol of coastal areas.  Have a listen for about 10 seconds to the following mystery sounds, and see if you can guess what’s making the clucking, croaking, and squeaking.  And here’s a hint: You might find this throaty creature in a dive.

If you guessed pelican chicks, you’re right!   Out of seven or eight pelican species worldwide, two occur in North America, and both are known from Virginia’s coast, at least occasionally.  The American White Pelican is considered an uncommon visitor in Virginia.  The Brown Pelican, on the other hand, is found year-round in the Commonwealth and has been occurring in increasing numbers in Virginia coastal waters since the 1980s.  Brown Pelicans were listed as a federally endangered species in 1970, after their populations had significantly decreased over several decades.  In fact, protection of Brown Pelicans was a significant reason for establishment in 1903 of the first U.S. National Wildlife Refuge on Florida’s Pelican Island.  A 1972 ban on the pesticide DDT, habitat restoration, and other conservation efforts have helped Brown Pelicans make a remarkable recovery.  The species’ populations from Alabama northward along the Gulf and Atlantic coasts were removed from the federally endangered list in1985, and other populations were removed from the list in 2009.

Pelicans are fish eaters, and Brown Pelicans are known for their feeding behavior of plunging from flight into water to trap fish in their large, expandable throat pouch.  Surfacing after an underwater catch, the birds point their bill down to drain out large amounts of water, then raise the bill up to swallow the fish.  Some other Brown Pelican peculiarities include being largely silent as adults; having excellent eyesight to spot fish from high above; suffering from seagulls that will try to take fish from a pelican’s pouch; and standing over their eggs to incubate them with heat from the skin of the adult pelican’s feet.

With their fortunes much improved since the first days of Florida’s Pelican Island Refuge in the early 1900s, Brown Pelicans are now a familiar flying and fishing feature along many coastlines, including Virginia’s.

Thanks to the U.S. Fish and Wildlife Service for making the pelican chicks sounds available for public use. 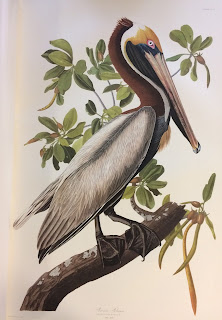 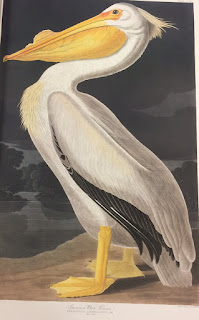 Brown Pelican painting (top) and American White Pelican painting (bottom), originally published between 1827 and 1838 by John James Audubon, as reprinted in 1985 by Abbeville Press, New York. Information about Birds of America is available from the National Audubon Society, online at http://www.audubon.org/birds-of-america; the Brown Pelican entry is online at https://www.audubon.org/birds-of-america/brown-pelican-0. Photos taken in 2019 from the reprint copy (no. 6 of 350 copies printed in 1985) owned by Special Collections of Virginia Tech Libraries. Virginia Water Radio thanks Special Collections for permission to photograph their copy and for their assistance. 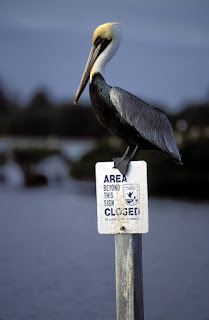 Brown Pelican at Pelican Island National Wildlife Refuge in Florida. Photo by John and Karen Hollingsworth, made available for public use by the U.S. Fish and Wildlife Service's National Digital Library, online at http://digitalmedia.fws.gov, accessed 1-21-19.  The specific link to the photo is https://digitalmedia.fws.gov/digital/collection/natdiglib/id/1628/rec/2. 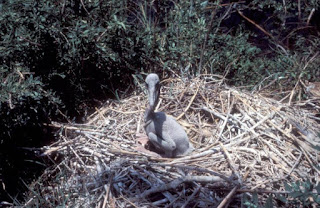 Young Brown Pelican on nest in Breton National Wildlife Refuge in Louisiana. Photo by Donna A. Dewhurst, made available for public use by the U.S. Fish and Wildlife Service's National Digital Library, online at http://digitalmedia.fws.gov, accessed 1-21-19.  The specific link to the photo is https://digitalmedia.fws.gov/digital/collection/natdiglib/id/3400/rec/13.

The scientific name of the Brown Pelican is Pelecanus occidentalis.

Following is some information on reproduction and feeding by Brown Pelicans, excerpted from the Virginia Department of Game and Inland Fisheries (VDGIF) “Fish and Wildlife Information Service,” online at https://vafwis.dgif.virginia.gov/fwis/booklet.html?&bova=040020&Menu=_.Taxonomy&version=17914.  (VDGIF information on the American White Pelican is online at https://vafwis.dgif.virginia.gov/fwis/booklet.html?&bova=040019&Menu=_.Taxonomy&version=17914.)

Reproduction
“The breeding season depends on the location.  The incubation period is 28 days.  There is one brood/year with 1-3 young/nest.  There are 1.2-1.5 fledglings/nesting effort needed for a stable population.  The females will re-nest if the first nest is destroyed.  They are sexually mature at 3 years.  Courtship activities are confined to the nest site.  The male brings nesting material to the female who builds the nest.  They are a long-lived bird.  The clutch size is from 2-5, and the eggs are chalky white, 3 X 1.9 inches.  Three eggs per clutch is the most common size; but 2 eggs is also common.”

Feeding
“This species will dive down on a school of fish from the air.  They feed in shallow estuarine waters.  They have been seen 30-60 km offshore.  They occasionally feed beyond the breakers, and frequent fishing piers.  They fly low over the water, spot a potential prey fish, and dive to capture it.  The fish are then transferred to the gular pouch.   They dive from heights of 3-9 meters and will fish from the surface of the water.  Red tides which kill fish cause pelicans to move out of the area.  They emigrate when food becomes scarce.  Cold temperatures cause fish to move down in the water column and become unavailable to surface feeding pelicans.  Foods include, crustaceans, menhaden, mullet, sardines, pinfish.”

Distribution and Habitat
“They are maritime, and not found inland.  They are found from North Carolina to Florida, around the Gulf coast to Texas and Mexico and southward to Venezuela, the West Indies and the Caribbean islands.  They are usually resident near breeding grounds.  The young birds tend to wander.  They are found in salt bays, beaches, and oceans on perches, posts and boats.  Sandspits and offshore sandbars are used for loafing in the daytime and roosting at night.  They are found on coastal inlets, mangrove keys, sandbars, and fishing piers.”

Encyclopedia Britannica, “Pelican,” as of 1/3/19, online at https://www.britannica.com/animal/pelican.

Virginia Department of Game and Inland Fisheries, “Fish and Wildlife Information Service,” online at http://vafwis.org/fwis/?Title=VaFWIS+Species+Information+By+Name&vUT=Visitor.  The American White Pelican entry is online at https://vafwis.dgif.virginia.gov/fwis/booklet.html?&bova=040019&Menu=_.Taxonomy&version=17914.  The Brown Pelican entry is online at https://vafwis.dgif.virginia.gov/fwis/booklet.html?&bova=040020&Menu=_.Taxonomy&version=17914.

For More Information about Pelicans or Other Birds

Cornell University Lab of Ornithology, “Merlin Photo ID,” online at http://merlin.allaboutbirds.org/.  The application for mobile devices allows users to submit a bird photograph to get identification of the bird.

Biology Course
BIO.1 – current applications to reinforce science concepts.
BIO.2 – water chemistry and its impact on life processes.
BIO.8 – dynamic equilibria and interactions within populations, communities, and ecosystems; including nutrient cycling, succession, effects of natural events and human activities, and analysis of the flora, fauna, and microorganisms of Virginia ecosystems.

World Geography Course
WG.2 – how selected physical and ecological processes shape the Earth’s surface, including climate, weather, and how humans influence their environment and are influenced by it.
WG.18 – cooperation among political jurisdictions to solve problems and settle disputes.