Unless otherwise noted, all Web addresses mentioned were functional as of 9-6-19.

From the Cumberland Gap to the Atlantic Ocean, this is Virginia Water Radio for the week of September 9, 2019.

MUSIC and SOUND – ~14 sec – “Storm surge is a dangerous event during a hurricane, where furious winds are driving deadly flows of water from our seas to our shores.”

That’s a stark message from the National Oceanic and Atmospheric Administration, or NOAA, about storm surge.  NOAA defines storm surge as “an abnormal rise of water generated by a storm, over and above the predicted astronomical tides…[and] produced by water being pushed toward the shore by the force of winds” associated with the storm.

During Hurricane Dorian in the first week of September 2019, storm surge—along with high winds and heavy rainfall— was predicted to cause some of the most severe impacts experienced along the U.S. Atlantic coast.

Dorian won’t be the last Atlantic tropical cyclone ever to threaten Virginia or other coastal areas with storm surge—it may not even be the last one this year—so that storm’s unwelcome arrival is a good time to revisit a Virginia Water Radio episode on storm surge, done previously in response to other hurricanes.  For an introduction to storm surge potential, have a listen for about 90 seconds to excerpts from, first, a 2013 National Hurricane Center [NHC] video, and second, a 2010 Virginia Department of Emergency Management [VDEM] video; the latter includes a list of Virginia areas most vulnerable to storm-surge flooding in any given storm.

SOUND/VOICE – NHC ~38 sec – “I’m Daniel Brown, hurricane specialist at NOAA’s National Hurricane Center in Miami.  Storm surge is the deadliest hazard associated with hurricanes. It’s a rise in the sea level by water being pushed to the shore by the force of the wind within the storm. But storm surge is not just a coastal event.  In some areas, the seawater can travel well inland with devastating consequences.  Storm surge is strongly influenced by a hurricane’s track, forward motion, intensity, and size.  Changes in any of these storm characteristics will significantly alter the amount of storm surge.”

SOUND/VOICE – VDEM ~47 sec – [Ellipses indicate places where portions of the original video were omitted from the audio segment used in this episode.] “Atlantic hurricanes and tropical storms can put Virginia’s coast at risk for flooding.  Near the coast, such flooding could be caused by storm surge.  It can increase the normal high tide by 15 feet or more.  Wind-driven waves on top of the storm surge can cause severe damage.  Virginia Beach, Norfolk, Chesapeake, Portsmouth, Suffolk, Hampton, Newport News, Poquoson, the Middle Peninsula, the Northern Neck, the Eastern Shore, and areas along the James River are all vulnerable to storm surge. ... If you live in an area that may flood, you should be prepared to leave immediately when officials issue an evacuation order for your community. ... Know your risk.  Be prepared before the storm hits. ...”

Here’s hoping for safety and recovery for people and places in the path of Dorian and any other tropical cyclone.

We close with about 25 seconds of tropical cyclone-inspired music.  Here’s “Tropical Tantrum,” composed for Virginia Water Radio by Torrin Hallett, a graduate student at Manhattan School of Music in New York.

This episode is the latest revision of a storm-surge-focused episode timed for particular tropical cyclones.  The previous episodes are the following: Episode 337, 10-10-16, on Hurricane Matthew storm surge; Episode 134, 10-29-12, on Hurricane/Superstorm Sandy storm surge; and Episode 385, 9-11-17, on Hurricane Irma storm surge.

“Tropical Tantrum” was composed by Torrin Hallett in May 2017.  Mr. Hallett is a 2018 graduate of Oberlin College and Conservatory in Oberlin, Ohio; as of 2019, he is a graduate student in Horn Performance at Manhattan School of Music in New York.  More information about Mr. Hallett is available online at https://www.facebook.com/torrin.hallett.  “Tropical Tantrum” was also included in the following other Virginia Water Radio episodes:
Episode 369, 5/22/17, on the upcoming Atlantic tropical storm season in 2017;
Episode 423, 6/2/18, on the upcoming Atlantic tropical storm seasons in 2018;
Episode 438, 9-17-18, on hurricane basic facts and history.
Virginia Water Radio thanks Mr. Hallett for composing this piece for Virginia Water Radio. 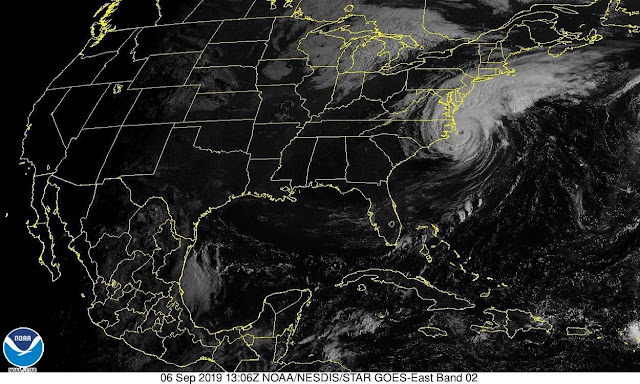 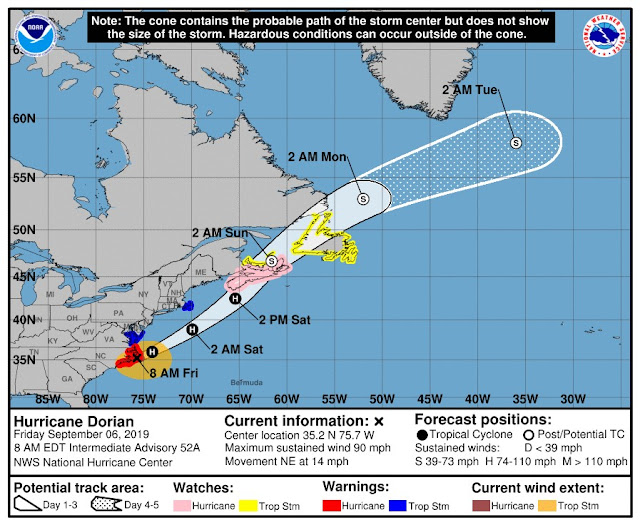 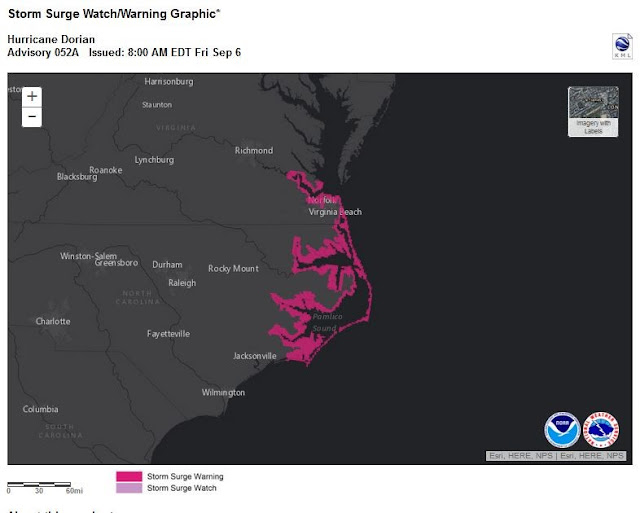 Map of storm surge watches and warnings area for Hurricane Dorian, issued on 9/6/19, 8 a.m. EDT, by the National Hurricane Center. Image accessed online at https://www.nhc.noaa.gov/refresh/graphics_at5+shtml/211226.shtml?wsurge#contents, on 9/6/19, 9 a.m.  The online image includes the following “Product description”: “This graphic displays areas that are under a storm surge watch/warning.  A storm surge warning indicates there is a danger of life-threatening inundation from rising water moving inland from the shoreline somewhere within the specified area, generally within 36 hours.  A storm surge watch indicates that life-threatening inundation is possible somewhere within the specified area, generally within 48 hours.  All persons, regardless of whether or not they are in the highlighted areas shown in the graphic, should promptly follow evacuation orders and other instructions from local officials.” 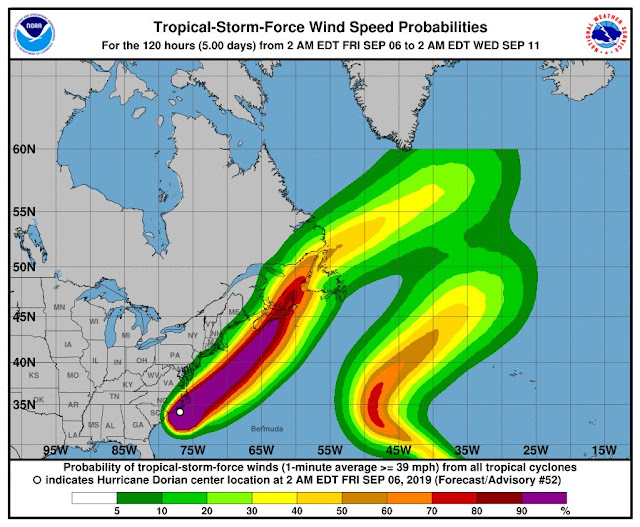 National Hurricane Center, “Storm Surge Overview,” online at https://www.nhc.noaa.gov/surge/. Among other items, this page includes an explanation of the factors that lead to storm surge, photographs and graphics, and two short videos.  Information on storm-surge potential and probabilities are also part of National Hurricane Center updates and advisories on any tropical storm.

National Hurricane Center, “Storm Surge Resources,” online at http://www.nhc.noaa.gov/surge/resources.php.  This site includes several videos, including the ones excerpted for this episode.

PBS NewsHour, “Nearly 2 million warned to flee destructive Hurricane Matthew in the U.S.,” 10/6/16, online at http://www.pbs.org/newshour/bb/nearly-2-million-warned-flee-destructive-hurricane-matthew-u-s/.  The segment includes an interview with then-Federal Emergency Management Agency (FEMA) Director Craig Fugate in which he discussed the dangers of storm surge flooding along coastlines and inland.

For More Information about Preparedness for Hurricanes and Other Tropical Cyclones

Virginia Department of Emergency Management, “Know Your Zone,” online at http://www.vaemergency.gov/hurricane-evacuation-zone-lookup/.  This site allows citizens to determine whether or not they are in a zone most at risk from an approaching tropical cyclone, in order better to respond when emergency managers may be calling for evacuations or other actions.

All Water Radio episodes are listed by category at the Index link above (http://www.virginiawaterradio.org/p/index.html).  See particularly the “Weather” subject category.

Following are links to previous episodes on severe weather and its impacts.

World Geography Course
WG.2 - how selected physical and ecological processes shape the Earth’s surface, including how humans influence their environment and are influenced by it.
WG.18 - cooperation among political jurisdictions to solve problems and settle disputes.