All Web addresses mentioned were functional as of 10-7-16.

From the Cumberland Gap to the Atlantic Ocean, this is Virginia Water Radio for the week of October 10, 2016.

The October 7, 2016, arrival of Hurricane Matthew along the U.S. East Coast made this week a good time to revisit the subject of storm surge, which was also the topic of an October 2012 episode when Hurricane or Superstorm Sandy was devastating parts of the mid-Atlantic region. Along with high winds and heavy rainfall, one of the most serious expected impacts from Matthew—just like from Sandy—was storm surge and the flooding it can cause to coastal communities and to inland areas along waterways. For an introduction to storm surge potential generally in Virginia and how residents can prepare, have a listen for about 80 seconds to the following excerpt from a Virginia Department of Emergency Management video produced in 2010. The excerpt includes a list of Virginia areas most at risk from storm-surge flooding.

On the morning of October 7, 2016, The Weather Channel reported that Hurricane Matthew had generated the highest storm surges in eastern Florida since Hurricane Hugo in September 1989, with Georgia and the Carolinas next to face the potential of such surges. Here’s hoping for the best for people and places in Matthew’s path.

The storm-surge audio was excerpted from the Virginia Department of Emergency Management’s August 2010 video, “Virginia Hurricane Evacuation: Storm Surge” (2 minutes, 48 seconds), accessed on You Tube at http://www.youtube.com/watch?feature=player_profilepage&v=83m2K2VNUUo, 10/7/16.  That audio excerpt was also used in Episode 134, 10-29-12, “Hurricane Sandy and Storm Surge.” 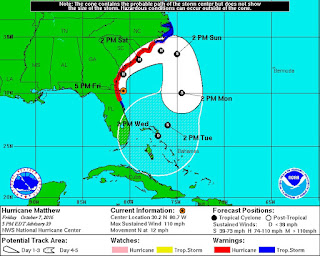 Potential track area of the center of Hurricane Matthew, as of 10/7/16 at 5 p.m. EDT. Image from the National Hurricane Center, online at http://www.nhc.noaa.gov/. 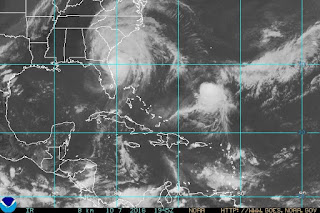 Satellite photo of Hurricane Matthew, centered just offshore of northeastern Florida, as of 3:45 p.m. EDT on 10/7/16. Please note that Z, or Greenwich Mean Time, shown on the photo is 4 hours ahead of EDT and 5 hours ahead of EST. Photo accessed at the National Oceanic and Atmospheric Administration (NOAA) Web site at http://www.goes.noaa.gov/browsh.html, on 10/7/16, 5:00 p.m. EDT. 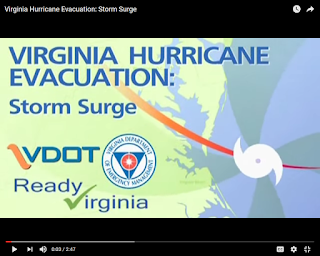 National Weather Service/National Hurricane Center Web site, at http://www.nhc.noaa.gov/. The site includes a “Storm Surge Overview” page, at http://www.nhc.noaa.gov/surge/; among other items, this page includes an explanation of the factors that lead to storm surge, photographs and graphics, and two short videos. Information on storm-surge potential and probabilities are also part of National Hurricane Center updates and advisories on any tropical storm.

PBS NewsHour, “Nearly 2 million warned to flee destructive Hurricane Matthew in the U.S.,” 10/6/16, online at http://www.pbs.org/newshour/bb/nearly-2-million-warned-flee-destructive-hurricane-matthew-u-s/. The video includes an interview with Federal Emergency Management Agency (FEMA) Director Craig Fugate in which he discussed the dangers of storm surge flooding along coastlines and inland.

All Water Radio episodes are listed by category at the Index link above (http://www.virginiawaterradio.org/p/index.html).  For episodes related to tropical storms, please see the “Weather” category.  As noted above under Acknowledgments, a previous episode on storm surge and Hurricane Sandy is Episode 134, 10-29-12.

World Geography Course
WG.2 - how selected physical and ecological processes shape the Earth’s surface, including how humans influence their environment and are influenced by it.
WG.4 - types and significance of natural, human, and capital resources.
WG.18 - cooperation among political jurisdictions to solve problems and settle disputes.

Virginia’s SOLs are available from the Virginia Department of Education, online at http://www.doe.virginia.gov/testing/.
Posted by Alan Raflo at 8:53 AM