From the Cumberland Gap to the Atlantic Ocean, this is Virginia Water Radio for the week of October 29, 2012.

This week, we start with a warning that residents of northern Virginia and other areas around the Chesapeake Bay could have heard on National Weather Service radio on the morning of October 29.  Have a listen for about 20 seconds.

That was an excerpt from the outlook issued by the Weather Service’s Baltimore/Washington forecast office at 6 a.m. on the 29th, as Hurricane Sandy approached landfall along the mid-Atlantic coast.  Along with high winds and heavy rainfall, one of the most serious impacts expected from Sandy is storm surge and the flooding it can cause to low-lying coastal communities.  Hurricane Sandy’s large storm-surge and coastal-flooding potential is due to the storm’s arrival at the time of increased tides from a full moon, and to the large size of its wind field, which increases both the timing and extent of storm surges.  For an introduction to storm surge potential in Virginia and how shoreline residents can prepare, have a listen for about a minute to the following excerpt from a Virginia Department of Emergency Management video.  The excerpt includes list of Virginia areas most at risk from storm-surge flooding.

By all accounts, Sandy is expected to be historic, not for record-breaking wind speeds but for the floodwaters pushed up in her storm surge.  Let’s hope Surging Sandy is a bit less than feared. 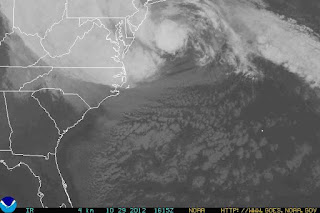 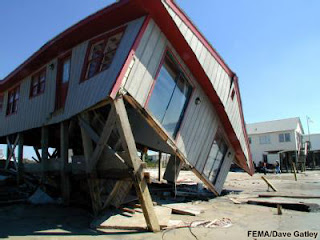 
Acknowledgments: The Chesapeake Bay hazardous weather outlook was taken from the “NOAA Weather Radio All Hazards Streaming Audio” Web page at http://www.nws.noaa.gov/nwr/streamaudio.htm#audio, Baltimore-Washington Forecast Office, 6:02 a.m. EDT 10-29-12 Hazardous Weather Outlook, accessed 10-29-12 at 11 a.m. EDT (no longer functional as of 10-8-16).  The storm-surge audio was excerpted from the Virginia Department of Emergency Management’s August 2010 video, “Virginia Hurricane Evacuation: Storm Surge” (2 minutes, 48 seconds), accessed on You Tube at http://www.youtube.com/watch?feature=player_profilepage&v=83m2K2VNUUo, 10/29/12; that audio except is also used in Episode 337, 10-10-16, on Hurricane Matthew and its storm-surge potential in October 2016.

Sources for more information:
The National Weather Service/National Hurricane Center Web site, at http://www.nhc.noaa.gov/, includes information on storm-surge potential and probabilities as part of its updates and advisories on any tropical storm.

The Hurricane Center’s Web site also includes a “Storm Surge Overview” page, at http://www.nhc.noaa.gov/surge/.  Among other items, this page includes an explanation of the factors that lead to storm surge, photographs and graphics, and two short videos.

Water Meetings and Other Events
For events related to Virginia's water resources, please visit the Quick Guide to Virginia Water–related Conferences, Workshops, and Other Events, online at http://virginiawaterevents.wordpress.com/.  The site includes a list of Virginia government policy and regulatory meetings occurring in the coming week.
Posted by Alan Raflo at 4:01 PM