All Web addresses mentioned were functional as of 10-21-16.

From the Cumberland Gap to the Atlantic Ocean, this is Virginia Water Radio for the week of October 24, 2016.

This week, we feature music about a Virginia Blue Ridge mountain river noted for exceptional natural qualities and a historical ownership conflict.  Have a listen for about 25 seconds.

You’ve been listening to part of “Hazel River,” by Timothy Seaman with Henry Smith and Paulette Murphy, on the 1997 album “Here on This Ridge,” from Pine Wind Music.  The album was a project celebrating Shenandoah National Park and the Blue Ridge’s people, lands, and waters.  According to Mr. Seaman, the tune commemorates a 1977 hike downstream along the Hazel River’s headwaters, and the music reflects that experience by moving down through several keys.  The Hazel River begins on the Blue Ridge in Rappahannock County, then flows approximately 51 miles to its confluence with the Rappahannock River in Culpeper County.  Along the way, its tributaries include the Hughes, Rush, and Thornton rivers.

The Hazel is noted for its scenery, trout fishery and other aquatic communities, and whitewater paddling sections.  Based on those qualities, the Virginia State Water Control Board designated a 6.5-mile section of the upper Hazel River in Rappahannock County as a Tier III/Exceptional State Water.  According to the Virginia Department of Environmental Quality, a Tier III designation recognizes waters with outstanding scenic beauty, exceptional aquatic communities, or superior recreational opportunities, and it prohibits any new or increased permanent wastewater discharges into such waters from identifiable point sources.  The Hazel’s designation, as well as the October 2016 removal from the river of part of the 150-year-old Monumental Mills dam in Culpeper County, was complicated by king’s grant claims—that is, claims from some streamside landowners that specific grants during the colonial period give the landowners possession of the streambed and the right to prohibit wading and fishing.

Scenery, trout fishing, paddling, history, streambed-ownership controversy—that’s an exceptional number of story lines to follow along the Hazel River’s run to the Rappahannock.  Thanks to Timothy Seaman for permission to use this week’s music, and we close with a few more seconds of “Hazel River.”

“Hazel River” and “Here on this Ridge” are copyright Timothy Seaman and Pine Wind Music, used with permission.   More information about Mr. Seaman is available online at http://www.timothyseaman.com/. 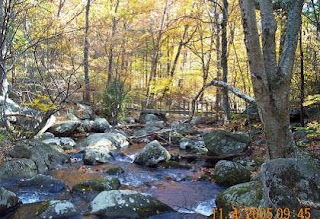 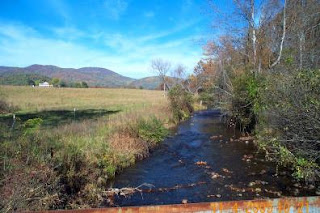 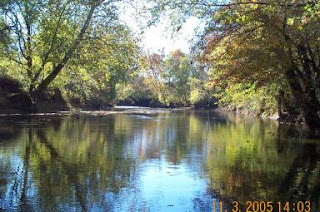 EXTRA FACTS ABOUT THE HAZEL RIVER

Following is a description of the upper Hazel River in Rappahannock County, Va., of which an approximately 6.5-mile segment was designated as a Virginia Exceptional State Water, effective in August 2008.  The description is an excerpt from Virginia Department of Environmental Quality, “Summary Report for the Hazel River Staff Site Visit November 3 & 4, 2005,” PDF available online at http://www.deq.virginia.gov/Programs/Water/WaterQualityInformationTMDLs/WaterQualityStandards/ExceptionalStateWaters(TierIII).aspx (scroll down to “Shenandoah National Park Region/Hazel River/Site Report”).

“The upper segment of the river within the Shenandoah National Park is a coldwater-habitat, headwater stream with a steep gradient, and the surrounding area is heavily forested.  The Hazel River is classified by the Department of Game and Inland Fisheries as a Class II wild trout stream from its headwaters downstream through most of Rappahannock County and, according to Exceptional State Waters guidance, satisfies the eligibility criteria of possessing an exceptional aquatic community. ...The streambed is dominated by boulder and cobble substrate and is characterized by numerous plunge pools that provide excellent habitat for native brook trout. ...The benthic macroinvertebrate community that was observed appeared to be what would be expected to inhabit a coldwater mountain stream, consisting of stonefly, mayfly, and caddisfly species. The environmental setting, recreational opportunities, and aquatic communities all appear to be of exceptional quality.

“Shortly after the Hazel River exits the national park, it may best be described as a transition from a coldwater fishery to a warmwater fishery.  Though the terrain is still somewhat mountainous, the gradient becomes less steep and the substrate becomes mostly cobble, gravel, and sand with occasional bedrock outcroppings.  Most segments of the river observed had adequate riparian buffer zones though others had pasture land directly abutting the river without the benefit of riparian buffers.  A cursory benthic survey was done and caddisfly, mayfly, and stonefly species were noted.

“Access to the river outside of the park is difficult unless one owns land on the river or has landowner permission to access the river through private property.  Bridges provide limited access.  Of the five or so bridges within this segment, only two provided what may be considered reasonable access for a canoe or kayak.  Canoeing or kayaking the majority of this segment would probably only be feasible during periods of high flow.  It should be noted that a number of the properties along the length of the Hazel River are claimed to be King’s Grant properties and as such landownership extends to the riverbed and the landowner is in control of fishing rights.

“Staff concurred the environmental setting through the Upper segment from outside the park boundaries downstream to the Rappahannock/Culpeper County line may be considered ‘exceptional’ to ‘good’ and the aquatic communities as healthy and diverse.  The recreational opportunities outside of the national park may be rated as good though limited by accessibility.”

College of William and Mary Department of Geology, “The Geology of Virginia/Hydrology,” online at http://geology.blogs.wm.edu/.

For More Information about King’s Grants and Streambed Ownership

All Water Radio episodes are listed by category at the Index link above (http://www.virginiawaterradio.org/p/index.html).   Please see specifically the “Rivers, Streams, and Other Surface Water” category.

This episode may also help with the following Virginia’s 2010 Science SOLs:

Virginia’s SOLs are available from the Virginia Department of Education, online at http://www.doe.virginia.gov/testing/