All Web addresses mentioned were functional as of 9-30-16.

From the Cumberland Gap to the Atlantic Ocean, this is Virginia Water Radio for the week of October 3, 2016.

This week, we take a peek inside a complex streamside community—one that takes some work to see, even though it’s all around any stream visitor. Have a listen for about 20 seconds to several mystery sounds, and see if you can guess the two main groups of animals found during an early fall exploration of that biological community. And here’s a hint: six plus eight equal the two of this answer.

If you guessed six-legged insects and eight-legged spiders, you’re right! You heard the sounds of Toms Creek in Blacksburg, Va., on September 27, 2016, along with an insect net sweeping the vegetation and air beside the stream, and a jar for observing what the net managed to catch. The streamside area, also known as the riparian area, of that part of Toms Creek has various grasses and other plants growing under tall American Sycamores, Black Willows, and other trees and shrubs. Here are common names of some of the 17 kinds of creatures found in Toms Creek’s riparian area that day: Asian ladybird beetles, flat bark beetles, black flies, crane flies, caddisflies, ebony bugs, leafhoppers, treehoppers, crab spiders, jumping spiders, and nursery web spiders. And those were all above the water; an exploration of the plants and rocks in the stream that day likely would have revealed immature dragonflies [and] mayflies, snails, and various other aquatic creatures. So if you like exploring and want to make some new acquaintances, there’s probably a big crowd gathered at a stream near you.

Thanks to the Virginia Tech Department of Entomology’s Insect ID Lab for equipment, sample identification, and information used in this episode. We close with the sounds of Toms Creek and of a two-legged creature: the American Goldfinch, a seed-eating bird that was the most vocal and conspicuous animal near the creek during our late-September exploration.

For more Virginia water sounds, music, and information, visit us online at virginiawaterradio.org, or call us at (540) 231-5463. Virginia Water Radio is produced by the Virginia Water Resources Research Center, part of Virginia Tech’s College of Natural Resources and Environment. Thanks to Stewart Scales for his banjo version of “Cripple Creek” to open and close the show. In Blacksburg, I’m Alan Raflo, thanking you for listening, and wishing you health, wisdom, and good water.

Thanks to Theresa Dellinger in the Virginia Tech Department of Entomology's Insect ID Lab for providing equipment, insect identification, and information for this episode. 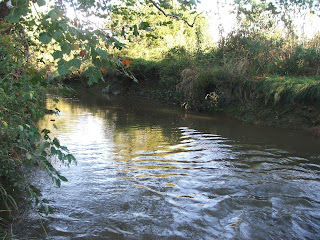 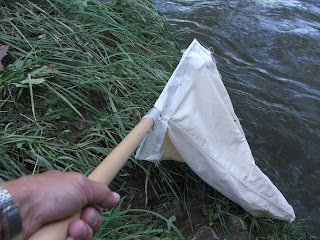 MORE INFORMATION ABOUT THE SPIDERS AND INSECTS MENTIONED IN THIS EPISODE

Following is a list of the spiders and insects found during the streamside exploration of Toms Creek in Heritage Park, Blacksburg, Va., on September 27, 2016. Along with the animals names are links to more information at the “Bug Guide” Web site produced by the Iowa State University Department of Entomology.  Thanks to Theresa Dellinger in the Virginia Tech Entomology Department’s Insect ID Lab for identifying the animals and for providing the Bug Guide links.

For More Information about Insects

University of Florida Department of Entomology and Nematology, “Featured Creatures,” online at http://entnemdept.ufl.edu/creatures/.

All Water Radio episodes are listed by category at the Index link above (http://www.virginiawaterradio.org/p/index.html); see particularly the “Insects” category.

For other episodes on various aspects of streams biology and of stream sampling, please see the following:
Methods of fish sampling – Episode 172 – 7/29/13.
Stream assessment with aquatic macroinvertebrates – Episode 81 – 9/26/11.

Episodes on physical factors of streams and other water bodies are listed under the “Science” category of the Index.

Virginia’s SOLs are available from the Virginia Department of Education, online at http://www.doe.virginia.gov/testing/.
Posted by Alan Raflo at 11:39 AM