All Web addresses mentioned were functional as of 8-19-16.

From the Cumberland Gap to the Atlantic Ocean, this is Virginia Water Radio for the week of August 22, 2016.

This week, that music, by an internationally acclaimed musician who called Virginia home for many years, helps us mark an important turning point in the Atlantic tropical storm season. Have a listen for about 50 seconds.

You’ve been listening to part of “Natural Disaster” by John McCutcheon, on his 1998 album “Four Seasons: Autumn Songs,” from Rounder Records. Prior to moving to Atlanta in 2006, Wisconsin native John McCutcheon was a long-time resident of Charlottesville, Virginia. While “Natural Disaster” is about the whirlwind caused by the arrival of a new baby, hearing an excerpt at this time of year reminds us that we’re right in the middle of the Atlantic tropical storm season. The season officially runs from June 1 to November 30, although Atlantic tropical storms sometimes occur in other months, as well—such as 2016’s first Atlantic tropical storm, Hurricane Alex in January. But mid-August through late October is typically the most active part of the Atlantic season, according to historical records. This year, through August 18, six named tropical storms had formed in the Atlantic basin so far, including two hurricanes. In its August 11 updated season outlook, the National Oceanic and Atmospheric Administration predicted that 2016 may turn out to be the most active Atlantic season since 2012, with forecasters asserting a 70-percent chance of a season total of 12 to 17 named storms, 5 to 8 hurricanes, and 2 to 4 major hurricanes.

Unlike babies, there’s nothing cuddly about tropical storms. But just like the child in John McCutcheon’s song, tropical storms can surprise us and turn the place upside down. So with the historically most active part of the Atlantic tropical storm season upon us, stay ready for some high-impact arrivals. Thanks to Mr. McCutcheon and Appalseed Productions for permission to use this week’s music, and we close with few more seconds of “Natural Disaster.” 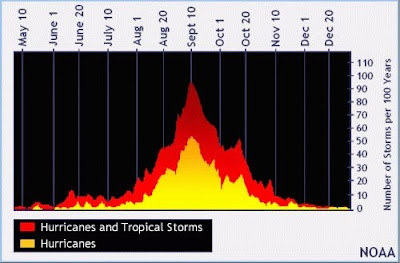 NOAA (National Oceanic and Atmospheric Administration) graph showing the predicted number of Atlantic tropical storms in 100 years, based on historical records. The NOAA caption states, “As seen in the graph above, the peak of the season is from mid-August to late October. However, deadly hurricanes can occur anytime in the hurricane season.” Graph accessed at National Hurricane Center Web site, “Tropical Cyclone Climatology,” online at http://www.nhc.noaa.gov/climo/. 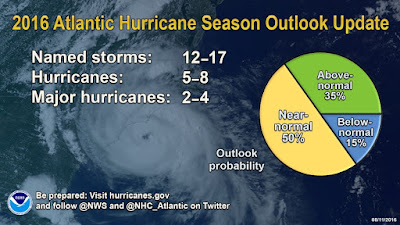 National Oceanic and Atmospheric Administration (NOAA) mid-season update on the outlook for the 2016 Atlantic tropical storm season, as of August 11, 2016. Graphic accessed at http://www.noaa.gov/media-release/atlantic-hurricane-season-still-expected-to-be-strongest-since-2012.

For More Information about Tropical Storms and Hurricanes

Information on El Nino and La Nina is available from the National Oceanic and Atmospheric Administration (NOAA), “El Nino Portal,” online at http://www.elnino.noaa.gov/.

All Water Radio episodes are listed by category at the Index link above (http://www.virginiawaterradio.org/p/index.html). See particularly the “Weather” category.

The episode may also help with the following Virginia 2010 English SOLs:

Virginia’s SOLs are available from the Virginia Department of Education, online at http://www.doe.virginia.gov/testing/.
Posted by Alan Raflo at 2:31 PM