All Web addresses mentioned were functional as of 8-12-16.

From the Cumberland Gap to the Atlantic Ocean, this is Virginia Water Radio for the week of August 15, 2016.

This week, that clatter of calls introduces a family of birds known for forked tails, tricky flying, and insect feeding. Have a listen for about 40 seconds to sounds from three species, and see if you can guess this bird family. And here’s a hint: if you get the right answer, you won’t have to do THIS to a bitter pill or your pride.

If you guessed swallows, you’re right! You heard a Bank Swallow, Cliff Swallow, and Tree Swallow, and the episode’s opening sound was a colony of Bank Swallows. Out of eight North American species of swallows, six species are summer breeders in Virginia: the three you heard, plus the Northern Rough-winged Swallow, the Purple Martin, and—perhaps the most familiar—the Barn Swallow, known for building mud nests in human structures. As a group, swallows are distinctive for their habit of flying fast over land or water to catch insects in their wide-opening beaks. Flying swallows can also be seen dipping their beaks into water to drink. Water habitats are important for several swallow species, such as Bank Swallows and Northern Rough-winged Swallows nesting in streambanks, and Cliff Swallows building mud nests near rivers, lakes, or wetlands. Several swallow species are also noted for gathering in large groups, either in nesting colonies, migrating flocks, or non-breeding roosting flocks.

Swallows are a dynamic part of Virginia’s summer air-space; look for these insect-eating aerialists near water, meadows, barns, bridges, and bird boxes.

Thanks to the Macaulay Library at the Cornell Lab of Ornithology for permission to use this week’s sounds, and we close with the sound of a Cliff Swallow colony, recorded in 2006 along the Kanuti River in Alaska.

Thanks to Matthew Young of the Macaulay Library for his help in providing the sound files used in this episode. 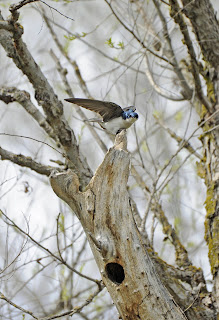 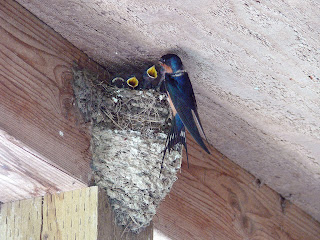 Barn Swallow in Oregon, June 2012. Photo by Lee Karney, made available for public use by the U.S. Fish and Wildlife Service's National Digital Library, online at http://digitalmedia.fws.gov.

According to the Virginia Department of Game and Inland Fisheries (VDGIF) “Fish and Wildlife Information Service,” online at http://vafwis.org/fwis/?Menu=Home.Species+Information), the six species of swallows known to occur in Virginia are the following (scientific name in parentheses):

Following are some excerpts from the VDGIF’s/Fish and Wildlife Information Service entries on Life History for the six swallows that breed in Virginia.

Barn: “Nests are built most commonly in buildings with open beams. Nests are constructed of mud pellets, straw and feathers. ...They will nest under bridges along with cliff swallows. Barn swallows may be aggressive at or near their nest sites, in that they may dive at or near intruders. ...Use hawking and skimming water surface as means of catching flying insects. ...They use sustained flight over water, fields, and other open habitats to capture flying insects.”

Cliff: “Nest is built under a bridge or dam, eaves and interior of barns and sheds or attached to cliff face. ...Uses hawking and skimming water surface to capture flying insects which are almost 100% of its diet. May feed many miles from nest site. Territory is restricted to immediate vicinity of nest site. Colonies have been counted at upwards of a 100 nests. In places where barn swallows nest little competition takes place since Cliff swallows nest near entrance and barn swallows nest farther back into barn. House sparrows are main competitors for nest sites

Northern Rough-winged: “Nest is usually in a burrow in a sandy bank of a stream. Nest is made of rootlets, weed stems, and dried grass. ...Solitary or semi-colonial nester. Colony may consist of two to six pairs. Do not dig their own burrows, preferring to use old bank swallow or kingfisher burrows. They use hawking and skimming water surface to capture flying insects.”

Purple Martin: “Usually nests in colonies; most of insect food caught in air, some while walking on ground; nest in cavities of small trees and in birdhouses built by [humans]; nesting material consists of nearly anything handy: leaves, rags, paper, string, or grass; nest made of a miscellaneous collection of sticks, wood stems, feathers, grasses, and mud; likes open grassy river valleys, shores of lakes, meadows about ponds, and coastal marshes.”

Tree: “Very jealous of its territory; engaging in flights in the spring to determine which shall leave the area; the first of the swallow species to arrive in spring and last to leave in the fall; ...in September mix with oncoming flocks of bank, barn, and cliff swallows; in summer begin collecting into enormous flocks feeding in most all northern marshes; most spend winter in Mexico but some spend all winter north of Carolinas; feeds almost entirely on insects taken in flight; sweeps about in loose flocks or in small groups low over open fields, surface of small ponds, up and down canyon streams; circles at great heights when insects flying high; perches in rows on utility wires; during migration and in winter it has a habit of roosting on bayberry and wax myrtle shrubs and at those periods will eat a great many berries; nests about habitations on the outskirts of cities and in the country; naturally nest in holes in trees or stumps, preferably in the vicinity of water; large numbers take abode in houses provided for them by [humans], providing that house sparrows and European starlings are kept away; habitat is open country near water; marshes, meadows, streams, lakes, wires.”

Washington Department of Fish and Wildlife, “Living with Swallows,” online at http://wdfw.wa.gov/living/swallows.html.

Cornell University Lab of Ornithology and the Audubon Society, “eBird” Web site at http://ebird.org/content/ebird/. Here you can find locations of species observations made by contributors, and you can sign up to contribute your own observations.

Virginia Society of Ornithology, online at http://www.virginiabirds.net. The Society is non-profit organization dedicated to the study, conservation, and enjoyment of birds in the Commonwealth.

Xeno-canto Foundation Web site at http://www.xeno-canto.org/. The site provides bird songs from around the world.

All Water Radio episodes are listed by category at the Index link above (http://www.virginiawaterradio.org/p/index.html). See particularly the “Birds” category.

Virginia’s SOLs are available from the Virginia Department of Education, online at http://www.doe.virginia.gov/testing/.
Posted by Alan Raflo at 2:59 PM