All Web addresses mentioned were functional as of 8-5-16.

From the Cumberland Gap to the Atlantic Ocean, this is Virginia Water Radio for the week of August 8, 2016.

This week, music by a Harrisonburg, Va.-based band helps deliver a message about flash flooding, one of the most dangerous kinds of weather-related disasters. Have a listen for about 40 seconds.

You’ve been listening to part of “Rain in the Valley,” by The Steel Wheels, from their 2012 album, “Lay Down, Lay Low.” According to the song’s composer, the lyrics were inspired by a friend’s experience of a flash flood in Virginia’s Shenandoah Valley. Fortunately, that friend lived to tell the tale, because flash floods all too frequently have tragic consequences, including very recently in West Virginia in June 2016 and in Ellicott City, Maryland, on July 30, 2016.

According to the National Oceanic and Atmospheric Administration, floods in general are the most common weather-related disaster, and flash floods are the most dangerous kind of floods because they combine the destructive power, incredible speed, and unpredictability. Flash floods typically occur when intense rainfall causes rapid water rises in waterways or even in normally dry channels. Some flash-flood risk areas include low spots in urban areas; steep terrain, particularly if recently burned or otherwise unvegetated; recreation areas along streams or rivers; low-water crossings; areas subject to ice jams or rapid snowmelt; and areas behind river levees or below dams, which, unfortunately, sometimes fail.

Wherever you are, if you receive a National Weather Service flash flood watch, be alert to possible flash flooding within the designated watch area; and if you receive a flash flood warning, take necessary precautions at once, because flash flooding has been reported or is imminent. Among the most important precautions are the following: if you receive a warning, head for higher ground; stay away from floodwaters; avoid walking or driving through flowing water; if water is rising around your vehicle, get out of the car and move to higher ground; and avoid camping or parking along streams or rivers during the warning period.

More details on flash floods or other floods are available from the Virginia Department of Emergency Management, online at readyvirginia.gov.

Thanks to The Steel Wheels for permission to use this week’s music, and we close with a few more seconds of “Rain in the Valley.” 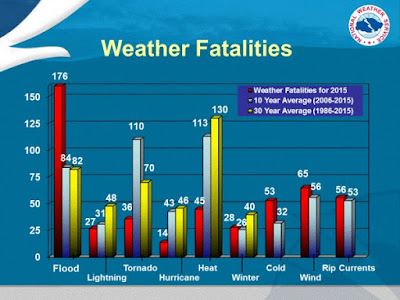 Above: Floods caused the highest number of weather-related fatalities in the United States in 2015, and the second-highest number over the past 30 years. Image from National Weather Service/Office of Climate, Water, and Weather Services, “Natural Hazard Statistics,” online at http://www.nws.noaa.gov/om/hazstats.shtml. 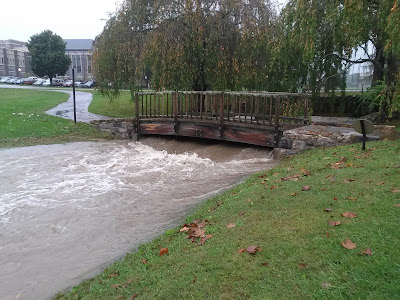 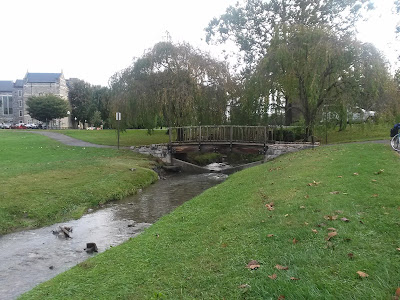 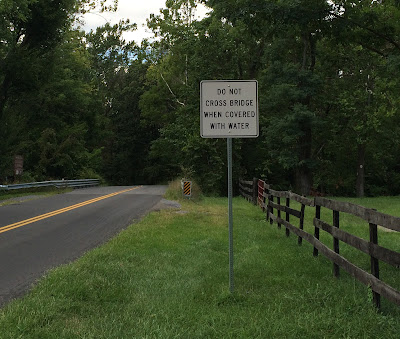 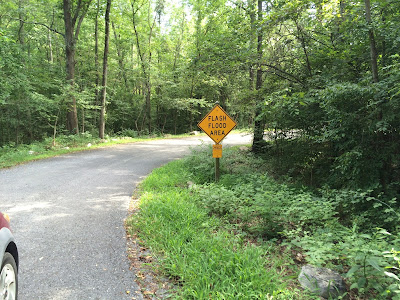 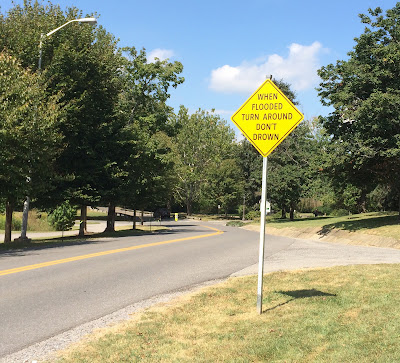 A sample of road signs warning motorists not to drive through flooded roadways.  Upper and middle: along Passage Creek in Fort Valley in Shenandoah County, Va., Aug. 22, 2016; lower: along Duck Pond Drive before the Stroubles Creek crossing on the Virginia Tech campus in Blacksburg, Sep. 13, 2016.

Flooding is an overflowing of water onto land that is normally dry. Floods can happen during heavy rains, when ocean waves come on shore, when snow melts too fast, or when dams or levees break. Flooding may happen with only a few inches of water, or it may cover a house to the rooftop. They can occur quickly or over a long period and may last days, weeks, or longer. Floods are the most common and widespread of all weather-related natural disasters.

Flash floods are the most dangerous kind of floods, because they combine the destructive power of a flood with incredible speed and unpredictability. Flash floods occur when excessive water fills normally dry creeks or river beds along with currently flowing creeks and rivers, causing rapid rises of water in a short amount of time. They can happen with little or no warning.

Flooding occurs in every U.S. state and territory, and is a threat experienced anywhere in the world that receives rain. In the U.S. floods kill more people each year than tornadoes, hurricanes, or lightning.

What areas are at risk from flash floods?

Densely populated areas are at a high risk for flash floods. The construction of buildings, highways, driveways, and parking lots increases runoff by reducing the amount of rain absorbed by the ground. This runoff increases the flash flood potential.

Sometimes, streams through cities and towns are routed underground into storm drains. During heavy rain, the storm drains can become overwhelmed and flood roads and buildings. Low spots, such as underpasses, underground parking garages, and basements can become death traps.

Areas near rivers are at risk from flash floods. Embankments, known as levees, are often built along rivers and are used to prevent high water from flooding bordering land. In 1993, many levees failed along the Mississippi River, resulting in devastating flash floods. The city of New Orleans experienced massive devastating flooding days after Hurricane Katrina came onshore in 2005 due to the failure of levees designed to protect the city.

Dam failures can send a sudden destructive wall of water downstream. In 1889 a dam break upstream from Johnstown, Pennsylvania, released a 30-40 foot wall of water that killed 2200 people within minutes.

Mountains and steep hills produce rapid runoff, which causes streams to rise quickly. Rocks and clay soils do not allow much water to infiltrate the ground. Saturated soil also can lead rapidly to flash flooding. Vacationing or recreating along streams or rivers can be a risk if there are thunderstorms in the area. A creek only 6 inches deep in mountainous areas can swell to a 10-foot deep raging river in less than an hour if a thunderstorm lingers over an area for an extended period of time.

Very intense rainfall can produce flooding even on dry soil. In the West, most canyons, small streams and dry arroyos are not easily recognizable as a source of danger. A wall of water 10-15 feet high can scour a canyon suddenly.

Ice jams and snowmelt can help cause flash floods.

Jeff Halverson, This is how an ‘off-the-charts’ flood ravaged Ellicott City, Washington Post, 8/1/16. The item includes a 1 min./25 sec. video, “How a flash flood occurs and what you should do if caught in one,” by Clarita Jimenez.

National Flood Insurance Program, online at https://www.floodsmart.gov/floodsmart/. This site includes a tool for determining a given property’s financial flood risk.

A previous episode on National Weather Service watches and warnings is Episode 102, 4-91-12.

For other episodes on weather and disaster preparedness, see the Weather/Natural Disasters topic category in the Index.

Earth Science Course
ES.8 - influences by geologic processes and the activities of humans on freshwater resources, including identification of groundwater and major watershed systems in Virginia.
ES.12 – weather and climate.

World Geography Course
WG.2 - how selected physical and ecological processes shape the Earth’s surface, including how humans influence their environment and are influenced by it.
WG.6 - past and present trends in human migration and cultural interaction as influenced by social, economic, political, and environmental factors.

The episode may also help with the following Virginia 2010 English SOLs:

Virginia’s SOLs are available from the Virginia Department of Education, online at http://www.doe.virginia.gov/testing/.
Posted by Alan Raflo at 2:20 PM