All Web addresses mentioned were functional as of 7-29-16.

From the Cumberland Gap to the Atlantic Ocean, this is Virginia Water Radio for the week of August 1, 2016.

SOUND – ~ 6 sec
This week, we follow the sounds of sloshing, squishing steps on midsummer exploration of a freshwater wetland in Blacksburg, Virginia. Have a listen for about 45 seconds to imagine the scene and see how many different sounds you can detect.

SOUNDS - ~46 sec
Insects, frogs, birds, gas bubbles in water, plants, people, and many more things made noises on July 27, 2016, in an area near a small, spring-fed stream and a pond formed by a dam of that stream. The area, dominated by cattails, is a streamside wet meadow, one kind of wetland. Wetlands are a diverse group of habitats, typically found in areas of transition between water bodies and normally dry uplands. Historically, wetlands were often considered obstacles to travel, navigation, or development, but they are now recognized for providing many ecological and hydrological functions, including water storage, groundwater recharge, erosion reduction, sediment trapping, nutrient uptake, and wildlife habitat. Four main classes of wetlands are marshes, swamps, bogs, and fens, but there’s great variety within those groups. Wetlands specialists determine whether a given area is, in fact, a wetland on the basis of the area’s soils, plants, and hydrologic conditions. Such determinations—sometimes controversial and legally debated—are a key part of wetlands regulation required by the federal Clean Water Act and by various state laws.

We close with medley of animal sounds you might hear in a Virginia wetland. As you listen, try this riddle: what do the names of Poquoson, Virginia, and Fenway Park in Boston have in common? [Both names derive from types of wetlands originally found in the area: pocosins in southeastern Virginia and fens in coastal Massachusetts.]

This episode is based on July 27, 2016, walk in a wet meadow wetland in Heritage Park in Blacksburg, Virginia. The wetland is in the basin of Toms Creek, a tributary of the New River. Most sounds heard in this episode were recorded then and there, but the episode-closing sounds were recorded at other Blacksburg locations at various times.

Shown below are some of the plants seen during a July 27, 2016, wetland walk in Heritage Park in Blacksburg, Va. Thanks to Tom Wieboldt, Virginia Tech Department of Biological Sciences, for identifying several of these plants. 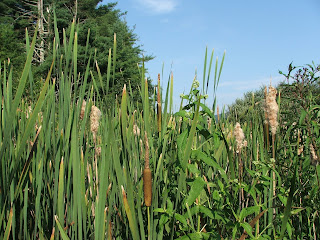 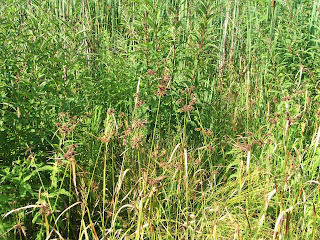 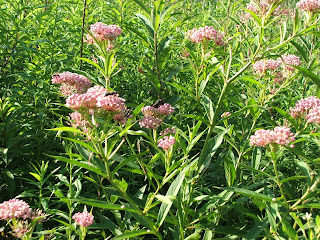 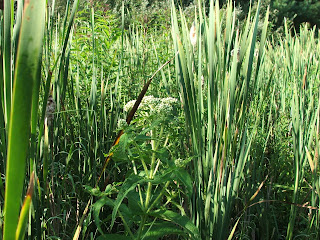 From the Chesapeake Bay Program, “Wetlands,” online at http://www.chesapeakebay.net/issues/issue/wetlands :
“A wetland is defined by its soils and vegetation. Some wetlands may be saturated with water throughout the year, while others are not always visibly wet. All wetlands are dominated by “hydrophytes”—plants that are adapted for life in wet soils—and have hydric soils, meaning they are periodically saturated or flooded.

“Two broad categories of wetlands are found in the Chesapeake Bay watershed: Tidal, or estuarine, wetlands are flooded with salt or brackish water when tides rise. Tidal wetlands are found along the shores of the Bay and the tidal portions of streams, creeks and rivers. Non-tidal, or palustrine, wetlands contain fresh water and make up 86 percent of the wetlands in the watershed. Palustrine wetlands are located on floodplains bordering streams and rivers, along the shorelines of lakes and ponds or covering broad, flat areas where water may collect (such as many areas on the Delmarva peninsula).

“Wetlands can be further distinguished by the varieties of plants that grow there: Emergent wetlands, often called marshes or wet meadows, are made up of grasses, sedges and other leafy, non-woody plants. Shrub wetlands, known as bogs or shrub swamps, are characterized by low- to medium-height woody plants. Forested wetlands, including wooded swamps and low-lying hardwood forests near rivers, are dominated by trees.

“Sixty-eight percent of the wetlands in the Bay watershed are forested.”

From the U.S. Environmental Protection Agency, “Wetlands Classification and Types, online at https://www.epa.gov/wetlands/wetlands-classification-and-types:
Short Definitions of Four Major Types of Wetland
Marsh: “Marshes are defined as wetlands frequently or continually inundated with water, characterized by emergent soft-stemmed vegetation adapted to saturated soil conditions; there are many different kinds of marshes....”

Bog: “Bogs are one of North America's most distinctive kinds of wetlands. They are characterized by spongy peat deposits, acidic waters and a floor covered by a thick carpet of sphagnum moss.”

Swamp: “A swamp is any wetland dominated by woody plants. There are many different kinds of swamps, ranging from the forested Red Maple, (Acer rubrum), swamps of the Northeast to the extensive bottomland hardwood forests found along the sluggish rivers of the Southeast.”

Fen: “Fens are peat-forming wetlands that receive nutrients from sources other than precipitation: usually from upslope sources through drainage from surrounding mineral soils and from groundwater movement. Fens differ from bogs because they are less acidic and have higher nutrient levels. Therefore, they are able to support a much more diverse plant and animal community. These systems are often covered by grasses, sedges, rushes and wildflowers. Like bogs, fens are mostly a northern hemisphere phenomenon—occurring in the northeastern United States, the Great Lakes region, the Rocky Mountains and much of Canada....”

From the Virginia Department of Environmental Quality, “Wetlands,” online at http://www.deq.state.va.us/Programs/Water/WetlandsStreams/Wetlands.aspx.
Wetland functions and values: “The physical, chemical, and biological properties of the Commonwealth’s wetlands work in concert to perform “wetland functions.” Wetland functions may include: storage of water, ground water recharge, sediment trapping, transformation of nutrients, and wildlife habitat. Wetlands are some of the most productive habitats on earth, providing nursery grounds for shellfish, fish and other vertebrate wildlife.”

Types of wetlands: “An exceptional diversity of wetlands is found across the Virginia landscape. Swamps, tidal marshes, wet meadows, bogs, pocosins and sinkhole wetlands are some of the many types of wetlands found here.”

Virginia Department of Conservation and Recreation, “The Natural Communities of Virginia—Classification Of Ecological Community Groups,” online at http://www.dcr.virginia.gov/natural_heritage/natural_communities/nctoc.shtml.

Wetlands in the News


State clears way for 'Project Buzzard' in Chesterfield, Richmond Times-Dispatch, 7/27/16.  This involves a Chesterfield County, Va., development project that is expected to affect 10 acres of wetlands and about 80 linear feet of stream, requiring some type of mitigation.

All Water Radio episodes are listed by category at the Index link above (http://www.virginiawaterradio.org/p/index.html). See particularly the “Rivers, Streams, and Other Surface Water” category.

Previous episodes focusing on wetlands include the following:
Episode 169, 7-18-13.

Episode 269, 6-8-15 (focusing on what waters, including what wetlands, are covered by the federal Clean Water Act).

Virginia’s SOLs are available from the Virginia Department of Education, online at http://www.doe.virginia.gov/testing/.
Posted by Alan Raflo at 3:52 PM