All Web addresses mentioned were functional as of 7-15-16.

From the Cumberland Gap to the Atlantic Ocean, this is Virginia Water Radio for the week of July 18, 2016.

That’s the sound of an underwater recording in a river in the Chesapeake Bay watershed.   If you were under a few feet of water in the Bay or one of its river tributaries, what aquatic vegetation might you find submerged there?  This week, 16 Virginia high school students give us a quick lesson on that subject.  Have a listen for about 25 seconds.

You’ve been listening to the names of 14 kinds of submerged aquatic vegetation found in the Chesapeake Bay watershed.  The names were shouted out by students from Achievable Dream High School, located in Newport News, Virginia, during the students’ two-week visit in July 2016 to Virginia Tech in Blacksburg.  Submerged aquatic vegetation, or SAV, is the formal name for plants and plant-like organisms that grow underwater in areas shallow enough that light can penetrate to the bottom.  In the Chesapeake Bay region, between about 15 and 25 such organisms are common or are otherwise ecologically significant, and collectively they’re often called Bay grasses.  Despite that common name, none actually are grasses; that is, they’re not classified in the grass family of plants.  Some—like Muskgrass—aren’t even plants, but rather are algae, which are not classified as true plants.

Those confusing details aside, there’s no confusion about the ecological importance of Bay grasses.  They’re a major source of food for waterfowl, as seen in names like Redhead Grass and Widgeon Grass; they provide habitat for fish, crustaceans like Blue Crabs, and other organisms; their leaves and roots harbor food sources for many animals; and they improve water quality by stabilizing sediments, taking up nutrients, and producing oxygen.  For all of these reasons, the extent of Bay grasses is an annually measured indicator of the Chesapeake’s overall health. In 2015, the Virginia Institute of Marine Science’ annual aerial survey reported 91,000 acres [Editor’s note: actually, over 91,600 acres were measured in 2015], a significant improvement over the record low of about 39,000 acres in 1984.

One goal of Chesapeake Bay-restoration efforts is to have 185,000 acres of Bay grasses.  That, and other challenging Bay-restoration goals, will take a lot of work.  But it’s not hard to imagine some of that work being done a few years from now by one or more of the Achievable Dream High School students you heard this week, who are already working to achieve their own challenging goals.  Thanks to those students for lending their voices to this episode.

Thanks to John Gray Williams, John Seiler, and Maggie Furrow, all in the Virginia Tech College of Natural Resources and Environment, for their help with this episode.

The underwater sounds in this episode were recorded by Raven Harris, of Newport News, Va., on the Appomattox River in Petersburg, Va., on April 18, 2014; used with permission.  Thanks to Mr. Harris for providing the sounds.  Paddling videos by Mr. Harris are available online at https://vimeo.com/stickmanghz. 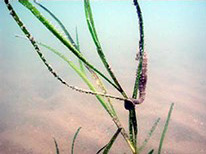 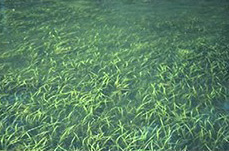 Following is a list of Chesapeake Bay submerged aquatic vegetation (SAV, or “Bay grasses”), compiled from several references.  The list is divided into species native to this area and those that are non-native.  The scientific name is given in parentheses and italics.  The format for common names and the scientific names are according to the 2012 Flora of Virginia, except as noted for three organism groups not included in the Flora of Virginia.  Notes on habitat, occurrence in Virginia, and ecological significance are from the Flora of Virginia (page numbers indicated).  The numbers, corresponding to the references given below the organism list, indicate the reference(s) that the organism.

Non-natives
Alligator-weed (Alternanthera philoxeroides) – “Alluvial and tidal swamps, canals, sloughs, ditches, and ponds.  ...In the past several decades, this weedy, introduced, semiaquatic species has spread and become rampantly invasive in parts of southeastern Virginia; its continued spread into new areas can be expected.” (p. 211)
Curly Pondweed (Potamogeton crispus) – “Ponds, lakes, and streams....  Frequent and locally common throughout the mountains and in scattered areas of the Piedmont and Coastal Plan; a problematic, invasive exotic in favorable aquatic habitats.” (p. 1335)
Eurasian Water-milfoil (Myriophyllum spicatum) – “Tidal swamps, ...tidal aquatic beds, ponds, disturbed tidal (or formerly tidal) habitats.  Mostly infrequent or rare, and scattered throughout; locally abundant in tidal reaches of the Potomac River and its major tributaries, in Back Bay, and possibly other estuaries.” – p. 636)
Hydrilla (Hydrilla verticillata) – “Still or slow waters of ponds, lakes, streams, and rivers (nontidal or tidal).  Infrequent throughout but usually abundant where found; most current records are from the Piedmont, but the species is rapidly spreading and can be expected in new areas.  One of our most invasive aquatic weeds, often clogging waterways and boat motors and outcompeting native aquatics.” (p. 1132)  Additional note 10/19/16: For more on Hydrilla in the Potomac River, please What’s up with the green stuff invading the Potomac River?, Washington Post, 10/15/16.
Parrot Feather (or Brazilian Water-milfoil) (Myriophyllum brasiliense or aquaticum) – “Swamps, ponds, ditches, sluggish streams and rivers.  Infrequent to locally common in the coastal Plain and Piedmont; rare in the mountains.  This invasive exotic appears to be actively spreading and increasing in abundance.” (p. 635)
South American Elodea (or Brazilian Waterweed) (Egeria densa or Elodea densa in some sources) – “Sluggish or still water in rivers (nontidal or tidal, streams, and impoundments.  Infrequent to rare throughout, but often locally common where found; most frequent in southwestern Virginia.” (p. 1131)
Spiny Naiad (or Spinyleaf Naiad, Brittle Naiad) (Najas minor) – Ponds and lakes.  This introduced species is rapidly spreading in Virginia and is quite tolerant of polluted waters.” (p. 1134)

All Water Radio episodes are listed by category at the Index link above (http://www.virginiawaterradio.org/p/index.html)

Virginia’s SOLs are available from the Virginia Department of Education, online at http://www.doe.virginia.gov/testing/.
Posted by Alan Raflo at 5:07 PM