All Web addresses mentioned were functional as of 7-22-16.

From the Cumberland Gap to the Atlantic Ocean, this is Virginia Water Radio for the week of July 25, 2016

This week, we revisit a July 2012 episode that features some rap and some rhyme about a particular kind of aquatic ecosystem that’s vital to coastal areas worldwide. Have a listen for about 75 seconds.

You’ve been listening to excerpts from two estuary education videos from the National Estuarine Research Reserve System. As you heard, an estuary is formed when freshwater rivers mix with saltier coastal water. Many estuaries are formed from a coastal plain river meeting the sea. But estuaries can form in other ways, too, such as within barrier islands like Virginia and North Carolina’s Outer Banks; by earthquake activity, which created the San Francisco Bay estuary; and from glaciers, which form a type of estuary called a fjord. While estuaries are usually thought of as brackish—that is, having freshwater mixed with salt water—some estuaries are completely freshwater, such as those on the Great Lakes where river water and lake water are mixed by winds.

However and wherever they form, estuaries typically result in biologically productive ecosystems, including important reproduction areas for fish and shellfish. Virginia borders a famous example: the Chesapeake Bay, the largest estuary in the United States. Other estuaries in Virginia include the lower, tidally influenced sections of the Potomac, York, and other large river tributaries to the Chesapeake, as well as Back Bay in Virginia Beach, the northernmost part of North Carolina’s Albemarle-Pamlico estuary. Beyond our Commonwealth, many of the world’s largest cities grew up around estuaries, including New York City and Tokyo. So for many millions of humans and countless other organisms, estuaries are among our most valuable and vital habitats.

This week’s music and voices were excerpted from online videos “Estuary Rap” (4 minutes/44 seconds; 2002) and “So What is an Estuary—So Now You Know,” (7 minutes/2 seconds; 2003), provided for educational uses by the National Estuarine Research Reserve System (part of the National Oceanic and Atmospheric Administration, or NOAA). These videos were accessed on the System’s “Estuary Education” Web site, http://estuaries.noaa.gov/Default.aspx. The site includes which includes a gallery of dozens of videos and many other resources for learning and teaching about estuaries. 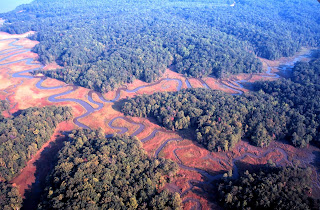 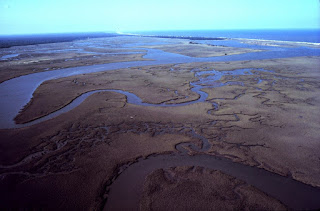 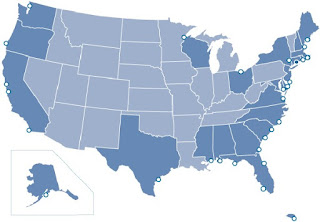 The locations of the 28 units of the National Estuarine Research Reserve System are shown on the following map, provided by the National Oceanic and Atmospheric Administration (NOAA), online at http://nerrs.noaa.gov/Default.aspx.

The reserves are the following:

For More Information about Estuaries

All Water Radio episodes are listed by category at the Index link above (http://www.virginiawaterradio.org/p/index.html). See particularly the “River, Streams, and Other Surface Water” subject category.

World Geography Course
WG.2 - how selected physical and ecological processes shape the Earth’s surface, including how humans influence their environment and are influenced by it.
WG.6 - past and present trends in human migration and cultural interaction as influenced by social, economic, political, and environmental factors.

Virginia’s SOLs are available from the Virginia Department of Education, online at http://www.doe.virginia.gov/testing/.
Posted by Alan Raflo at 3:23 PM