From the Cumberland Gap to the Atlantic Ocean, this is Virginia Water Radio for the week of May 27, 2019.

That music is part of “Driving Rain,” by the Nelson County- and Charlottesville, Va.-based band Chamomile and Whiskey.  It’s the backdrop this week for our annual call-out of the planned names of a bunch of soggy, windy, and generally unruly potential summer and fall visitors.  Have a listen for about 30 seconds, and see if you can guess what’s being named.

[Editor's correction and note on the audio: Named storms have occurred before June 1 in the past five, not four years, including this year.  Besides the ones mentioned in the audio, others were Ana in May 2015 and Bonnie in May 2016.]

Before a tropical system of any speed or name barges into the Old Dominion, here are some important preparedness steps you can take:
Make a written emergency plan, including an evacuation plan;
Assemble an emergency kit of food, water, and supplies:
Prepare your home for high winds: and
Establish ways to stay informed, especially if the power goes out.

Detailed safety tips for hurricanes and other severe weather are available from the “Safety” link at the National Weather Service Web site, www.weather.gov.  While the Weather Service’s “Hurricane Preparedness Week” for 2019 was May 5-11, right now is still a good time to start getting ready for the next tropical cyclone!

Thanks to 11 Virginia Tech faculty, staff, and students for lending their voices to this episode.  Thanks also to Chamomile and Whiskey for permission to this week’s music, and—while hoping this Atlantic tropical storm season doesn’t drive anyone too hard—we close with a few more seconds of “Driving Rain.”

The 2019 Atlantic tropical cyclone names were called out by 11 Virginia Tech faculty, staff, and students on May 16-17, 2019.  Virginia Water Radio thanks those people for participating in this episode.

“Driving Rain,” from the 2012 album “The Barn Sessions,” is copyright by Chamomile and Whiskey and by County Wide Records, used with permission.  More information about Chamomile and Whiskey is available online at http://www.chamomileandwhiskey.com/, and information about Charlottesville-based County Wide records is available online at http://countywidemusic.worldsecuresystems.com/.  “Driving Rain” is also used in the following Virginia Water Radio episodes: 291 (11-23-15), 401 (1-1-18), and 451 (12-17-18). 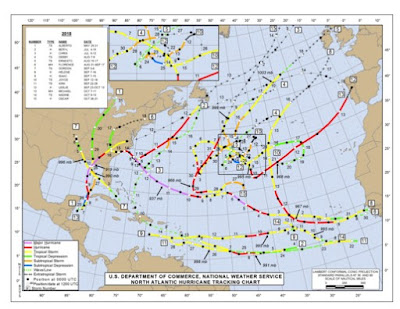 Names and tracks of Atlantic basin tropical cyclones (depressions, storms, and hurricanes) in 2018, according to the National Hurricane Center, online at https://www.nhc.noaa.gov/data/tcr/index.php?season=2018&basin=atl. 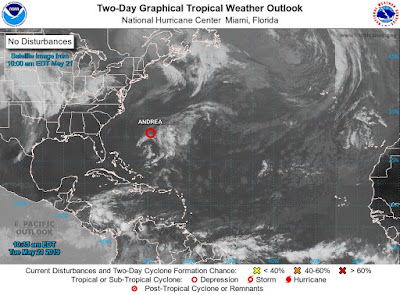 The following information is quoted from the National Weather Service’s “Hurricane Preparedness Week 2019” list of tips for each day of a week, online at http://www.weather.gov/wrn/hurricane-preparedness#prepweek.

Day 1 - Determine your risk.
Find out today what types of wind and water hazards could happen where you live, and then start preparing now for how to handle them. Hurricanes are not just a coastal problem. Their impacts can be felt hundreds of miles inland. It’s easy to forget what a hurricane is capable of doing.

Day 2 - Develop an evacuation plan.
The first thing you need to do is find out if you live in a storm surge hurricane evacuation zone or if you’re in a home that would be unsafe during a hurricane. If you are, figure out where you’d go and how you’d get there if told to evacuate. You do not need to travel hundreds of miles. Identify someone, perhaps a friend or relative who doesn’t live in a zone or unsafe home, and work it out with them to use their home as your evacuation destination. Be sure to account for your pets, as most local shelters do not permit them. Put the plan in writing for you and those you care about.

Day 3 - Assemble disaster supplies.
You’re going to need supplies not just to get through the storm but for the potentially lengthy and unpleasant aftermath. Have enough non-perishable food, water and medicine to last each person in your family a minimum of one week. Electricity and water could be out for at least that long. You’ll need extra cash, a battery-powered radio and flashlights. Many of us have cell phones, and they all run on batteries. You’re going to need a portable, crank, or solar-powered USB charger.

Day 4 - Secure an insurance check-up.
Call your insurance company or agent and ask for an insurance check-up to make sure you have enough homeowners insurance to repair or even replace your home. Don’t forget coverage for your car or boat. Remember, standard homeowners insurance doesn’t cover flooding. Whether you’re a homeowner or renter, you’ll need a separate policy for it, and it’s available through your company, agent or the National Flood Insurance Program at www.floodsmart.gov. Act now as flood insurance requires a 30-day waiting period.

Day 5 - Strengthen your home.
If you plan to ride out the storm in your home, make sure it is in good repair and up to local hurricane building code specifications. Many of these retrofits do not cost much or take as long to do as you may think. Have the proper plywood, steel or aluminum panels to board up the windows and doors. Remember, the garage door is the most vulnerable part of the home, so it must be able to withstand the winds.

Day 6 - Check on your neighbor.
Many Americans rely on their neighbors after a disaster, but there are also many ways you can help your neighbors before a hurricane approaches. Learn about all the different actions you and your neighbors can take to prepare and recover from the hazards associated with hurricanes.

Day 7 - Complete your written hurricane plan.
The time to prepare for a hurricane is before the season begins, when you have the time and are not under pressure. If you wait until a hurricane is on your doorstep, the odds are that you will be under duress and will make the wrong decisions. Take the time now to write down your hurricane plan. Know where you will ride out the storm and get your supplies now. You don’t want to be standing in long lines when a hurricane warning is issued. Those supplies that you need will probably be sold out by the time you reach the front of the line. Being prepared, before a hurricane threatens, makes you resilient to the hurricane impacts of wind and water. It will mean the difference between your being a hurricane victim and a hurricane survivor.

The following information is quoted from the National Oceanic and Atmospheric Administration, “Tropical Cyclone Names,” online at http://www.nhc.noaa.gov/aboutnames.shtml.

“Since 1953, Atlantic tropical storms had been named from lists originated by the National Hurricane Center. They are now maintained and updated through a strict procedure by an international committee of the World Meteorological Organization [online at http://www.wmo.int/pages/prog/www/tcp/].

“[Six lists] are used in rotation and re-cycled every six years, i.e., the 2019 list will be used again in 2025. The only time that there is a change in the list is if a storm is so deadly or costly that the future use of its name on a different storm would be inappropriate for reasons of sensitivity. If that occurs, then at an annual meeting by the WMO committee (called primarily to discuss many other issues) the offending name is stricken from the list and another name is selected to replace it. Several names have been retired since the lists were created. [More information on the history of naming tropical cyclones and retired names is available online at https://www.nhc.noaa.gov/aboutnames_history.shtml.]

“If a storm forms in the off-season, it will take the next name in the list based on the current calendar date. For example, if a tropical cyclone formed on December 28th, it would take the name from the previous season's list of names. If a storm formed in February, it would be named from the subsequent season's list of names.  In the event that more than twenty-one named tropical cyclones occur in the Atlantic basin in a season, additional storms will take names from the Greek alphabet.”

For More Information on Tropical Cyclones and Emergency Preparedness

All Water Radio episodes are listed by category at the Index link above (http://www.virginiawaterradio.org/p/index.html). See particularly the “Weather/Natural Disasters” subject category.

Following are links to other episodes on tropical cyclones.