Unless otherwise noted, all Web addresses mentioned were functional as of 5-10-19.

From the Cumberland Gap to the Atlantic Ocean, this is Virginia Water Radio for the week of May 13, 2019.

This week, that raucous sound opens an episode about the most abundant species of waterfowl in North America.  Have a listen for about 20 seconds to these mystery sounds, and see if you know this bird.  And here’s a hint: the green mineral malachite reveals both the first part of this bird’s name and the color of the males’ head.

If you guessed the Mallard, you’re right!  This relatively large duck is found throughout North America and also breeds in Asia, Australia, and Europe; moreover, the species is the source of all domestic ducks, excluding the Muscovy Duck.  Male Mallards are notable for their green head, reddish breast, and white neck ring, while the females have a less conspicuous mottled brown coloration.  Both sexes, however, have a distinctive blue wing patch, or speculum.  While males have the brighter colors, the females make the loud, recognizable quacks.

Mallards inhabit a wide variety of habitats, including wetlands, ponds, lakes, estuaries, parks, meadows, and agricultural fields.  They nest in shallow depressions on the ground, concealed by tall grasses or other plants.  On the water, Mallards feed by dabbling, that is, tipping forward and dunking their head to grasp aquatic plants.  On land, they’ll graze on natural or cultivated vegetation and they’ll prey upon various insects, worms, and other invertebrates.

The species has become common and adapted to humans in many urban and suburban areas, accepting offers of food and at times stopping traffic as a mother and ducklings cross a street.  In the wild, though, fast-flying Mallards may adroitly avoid humans, as described in this passage from the 1800s by John James Audubon: “Look at that Mallard as he floats on the lake; see his elevated head glittering with emerald-green, his amber eyes glancing in the light!  Even at this distance, he has marked you, and suspects that you bear no good will towards him…. The wary bird draws his feet under his body, springs upon them, opens his wings, and…bids you farewell.”

And we say farewell for now to the bird that the Cornell Lab of Ornithology has called the “standard against which all other ducks are compared.”  If anyone ever asks you to name the most abundant duck in North America, here’s a whimsical way you might answer:

The Mallard sounds were recorded by Virginia Water Radio on December 10, 2015, at the Virginia Tech Duck Pond in Blacksburg.

The “Mallard” name call-out was voiced by a Blacksburg, Va., friend of Virginia Water Radio on November 10, 2012. 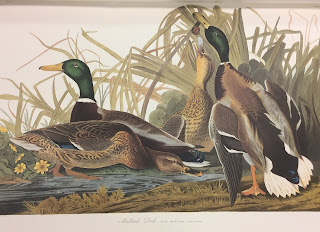 Mallard painting originally published between 1827 and 1838 by John James Audubon in Birds of America (plate 221), as reprinted in 1985 by Abbeville Press, New York.  Photo taken May 13, 2019, from the reprint copy (no. 6 of 350 copies printed in 1985) owned by Special Collections of Virginia Tech Libraries.  Virginia Water Radio thanks Special Collections for permission to photograph their copy and for their assistance.  Information about Birds of America is available from the National Audubon Society, online at http://www.audubon.org/birds-of-america. 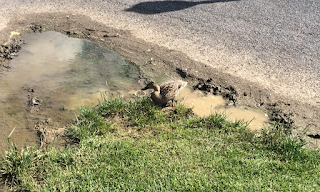 Female Mallard on the Virginia Tech campus in Blacksburg, May 8, 2019. 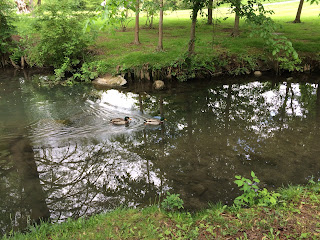 Male Mallards on Stroubles Creek on the Virginia Tech campus in Blacksburg, May 9, 2019. 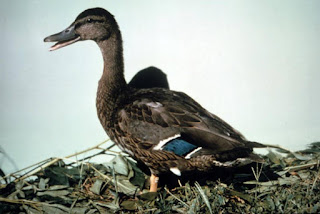 Female Mallard at Yukon Delta National Wildlife Refuge in Alaska, April 2008.  Photo by the U.S. Fish and Wildlife Service, made available for public use by the Service's National Digital Library, online at https://digitalmedia.fws.gov/digital/collection/natdiglib/id/2513/rec/3, accessed 5-13-19. 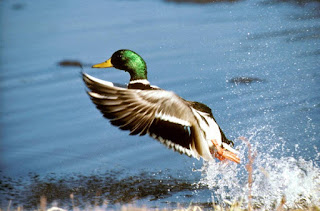 Male Mallard, location unidentified, April 2008.  Photo by Erwin and Peggy Bauer, made available for public use by the U.S. Fish and Wildlife Service's National Digital Library, online at https://digitalmedia.fws.gov/digital/collection/natdiglib/id/5184/rec/2, accessed 5-13-19.

The scientific name of the Mallard is Anas platyrhynchos.

Here are some points about Mallards, excerpted from the Virginia Department of Game and Inland Fisheries, “Fish and Wildlife Information Service/Mallard,” online at https://vafwis.dgif.virginia.gov/fwis/booklet.html?&bova=040051&Menu=_.Taxonomy&version=18025.

“This is the most abundant duck in North America.  In the northeast over the past 100 years, it has changed from a rare migrant to a major game bird due in part to the release of game-farm birds, and also to expansion east of the breeding range.”

“This is a large surface-feeding duck, with a stocky build.  The adult male has a length of 24.7 inches average and a weight of 2.75 pounds average.  The adult female has an average length of 23.1 inches and an average weight of 2.44 pounds.  The adult male has an uncrested, glossy-green head, white neck ring, reddish brown breast, brownish back, white tail, and dark rump.  It has a yellowish bill, orange feet, violet-blue speculum, and recurved central tail feathers.  The adult female is mottled brown, with a whitish tail, a bill patched with orange, orange feet, and a violet-blue speculum.  In flight, a white bar on each side of speculum evident in both sexes.”

“In Virginia on the Coastal Plain, eggs [have been] observed as early as 10 April, with ducklings from 11 May to mid-August. In the Piedmont, young are seen from 27 April through late July.  In the western Mountains and Valleys, many broods are evident in June.  The clutch size is from 6 to 15, usually 7 to 10 with larger clutches laid earlier in the season.  There is usually 1 egg laid daily until the clutch is complete.  They have one brood per year, with re-nesting not uncommon if the first clutch is lost. Incubation is done by the female and lasts 26-30 days. …They begin establishing pair bonds as early as August, although September and October is the usual time.  As males assume nuptial plumages, courtship flights and displays reach a high level of activity continuing through winter and into spring. …Upon arrival at the breeding grounds, the flock breaks up as pairs head to small water areas. …The preferred nest site is upland and the distance to water varies greatly, depending on the availability of nesting cover, from a few feet up to 5 miles, but is usually within 100 yards.  It prefers placing the nest in high vegetation, from 10 to 50 inches tall.  It is not attracted to wooded habitats, but prefers nesting in typical grassland marsh habitat.  Other sites chosen include: marshes with nests built in marsh growth over water, under groupings of American yew and white cedar, on levees, along roadsides, and in hayfields in agricultural areas. …For the nest, the female forms a depression in plant debris or moist soil 7-8 inches across and 1-2 inches deep.  As each egg is laid, more vegetative material and some down is added.”

“They are found grazing in grain fields, marshes, and meadows, dabbling in shallow water, and diving if necessary to obtain food. ...The mallard is fitting well into park situations in urban areas.  [In such areas,] often supplemental food is provided (corn, bread) and by [these areas] offering refuge during hunting season, large numbers [of birds] assemble, especially in the winter.”

Cornell University Lab of Ornithology, “Merlin Photo ID,” online at http://merlin.allaboutbirds.org/.  The application for mobile devices allows users to submit a bird photograph to get identification of the bird.

Following are links to other episodes using Mallard sounds.

Following are links to other episodes on ducks.