Except as otherwise noted, all Web addresses mentioned were functional as of 12-14-18.

From the Cumberland Gap to the Atlantic Ocean, this is Virginia Water Radio for the week of December 17, 2018.

This week, that sound of a Red-winged Blackbird and other birds in a wetland in Blacksburg, Virginia, opens an episode about the legal status of wetlands and other kinds of waters under the federal Clean Water Act.  We’re revisiting a June 2015 episode on that topic, because a proposed change in relevant federal regulations was announced just last week.

First passed in 1972, the Clean Water Act’s main goal is “to restore and maintain the chemical, physical, and biological integrity of the Nation’s waters.”  The Act states that it applies to “navigable waters,” defined as “waters of the United States, including the territorial seas,” and Section 404 includes wetlands in the waters where fill activities are to be regulated.

All waters covered by the Act are known as “jurisdictional waters,” and any polluting activities in such waters require a federal permit.  In 1986, the Army Corps of Engineers and the U.S. Environmental Protection Agency, or EPA, published regulations that applied the Act to several kinds of non-navigable waters—including tributaries and wetlands—that may affect traditional navigable waterways.  Many questions and legal challenges were raised over implementation of that definition and later regulations, and U.S. Supreme Court rulings in 2001 and 2006 generated more questions and issues of implementation.

In 2015, the Corps and the EPA under the Obama Administration published a new regulation with a revised definition of the waters of the United States.  Several states and interest groups challenged that regulation in court, claiming it went beyond what Congress authorized in the Clean Water Act.  As of early December 2018, that regulation was in effect in only 22 states, the District of Columbia, and U.S. Territories, while under preliminary court injunctions in the other 28 states [according to the background information included in the 2018 rule proposed by the Trump administration].

On December 11, 2018, the Corps and the EPA under the Trump Administration announced a proposed new regulation to revise again the definition of waters of the United States.  Essentially, the new proposal would add restrictions to the types of wetlands and other non-navigable waters covered by the Act, while aiming to make it easier for landowners to determine whether their property contains a jurisdictional water or not.

As was true with the 2015 regulation, one can reasonably expect that the 2018 proposal will generate more chapters of interpretation, discussion, disagreement, and litigation in the story of the waters of the United States.

We close with some music about rainfall, because rain is an obvious driver of where and when the landscape has water that may, or may not, be covered by the Clean Water Act.  Here’s about 20 seconds from “Driving Rain,” by the Nelson County, Va.-based group Chamomile and Whiskey.

This Virginia Water Radio episode updates and adds to Episode 269, 6-8-15.

The bird sounds heard in this episode were recorded at near a seasonal pond in Heritage Park in Blacksburg, Va., April 9, 2017.

“Baldcypress Swamp,” from the 2004 album “Virginia Wildlife,” is copyright by Timothy Seaman and Pine Wind Music, used with permission.   The “Virginia Wildlife” album was a collaboration between Mr. Seaman and the Virginia Department of Game and Inland Fisheries.  More information about Timothy Seaman is available online at http://www.timothyseaman.com/.  “Baldcypress Swamp” was also used in Virginia Water Radio episodes 151 (3-4-13) and 319 (6-6-16).

“Driving Rain,” from the 2012 album “The Barn Sessions,” is copyright by Chamomile and Whiskey and by County Wide Records, used with permission.  More information about Chamomile and Whiskey is available online at http://www.chamomileandwhiskey.com/, and information about Charlottesville-based County Wide records is available online at http://countywidemusic.worldsecuresystems.com/.  “Driving Rain” was featured in Virginia Water Radio episode 401 (1-1-18).

What does the definition of “waters of the United States" say about the following areas? 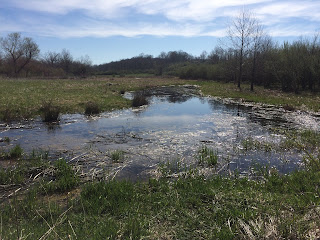 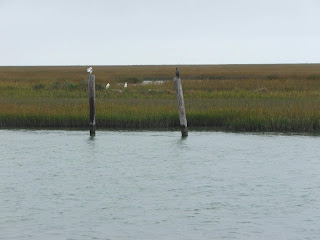 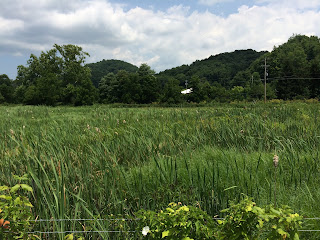 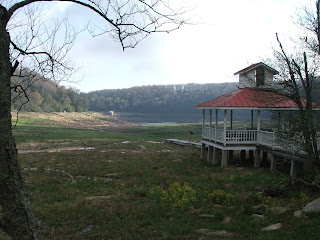 Mountain Lake (much reduced from traditional lake level) in Giles County, Va., May 17, 2008. 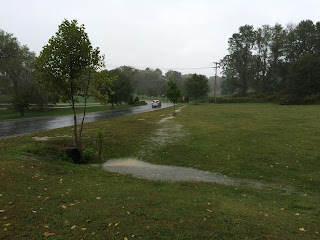 EXTRA FACTS ABOUT DEFINITIONS OF “WATERS OF THE UNITED STATES”

Below are some key differences between the 2015 “Waters of the United States” rule (or regulation) and definition published under the Obama administration and the December 2018 proposed rule by the Trump administration, according to information accessed on December 12, 2018. I n the notes below, “jurisdictional water” refers to traditional navigable waters or waters otherwise defined in regulations as covered by the Clean Water Act.

Source for December 2018 proposed new regulation under the Trump administration:
U.S. Environmental Protection Agency (EPA), “Revised Definition of ‘waters of the United States’—Proposed Rule,” online at https://www.epa.gov/wotus-rule/revised-definition-waters-united-states-proposed-rule.  A PDF of the proposed rule is available at this link: https://www.epa.gov/sites/production/files/2018-12/documents/wotus_2040-af75_nprm_frn_2018-12-11_prepublication2_1.pdf; the definition language of Part 328.3 starts on page 185 of the PDF.   The Trump administration will publish this rule in the Federal Register in late 2018 or early 2019, after which the proposed rule will undergo a public comment period.  Following public comment, the rule would again need to be published in the Federal Register as a final rule.

Brief Summary of Four Key Changes in the 2018 Proposed Regulation
1) Would remove from coverage streams that flow only in direct response to precipitation, known as ephemeral streams.
2) Would remove provisions for specific waters being determined to be covered on a case-by-case basis if the waters have a “significant nexus” to a jurisdictional water, under a term and concept stated in concurring opinion by U.S. Supreme Court Justice Anthony Kennedy in the 2006 Rapanos v. United States case.
3) Would restrict the waters that can be covered on the basis of being considered “adjacent” to jurisdictional waters.
4) Would remove from coverage wetlands that are separated from a jurisdictional water.

Additional Details
A. Both the 2015 rule and the 2018 proposed rule define “navigable waters” as “waters of the United States, including the territorial seas.”

C. The proposed 2018 rule’s list includes waters used now, in the past, or potentially in commerce; tributaries (as defined in the rule) of waters used for commerce; certain defined ditches (for example, Eire Canal); lakes and ponds that contribute perennial or intermittent flow to water used for commerce; impoundments of jurisdictional waters; and wetlands “adjacent” (as defined in the rule) to jurisdictional.

D. The 2015 rule defines tributary to a jurisdictional water as “characterized by the presence of the physical indicators of a bed and banks and an ordinary high water mark.”  The 2018 proposal defines tributary as having “perennial or intermittent flow” in a “typical year” (“normal range of precipitation over a rolling thirty-year period” for the area).  The 2018 proposal specifically excludes “ephemeral” waters, that is, “surface water flowing or pooling only in direct response to precipitation.”

F. The 2018 proposed rule includes only “adjacent wetlands.” The definition of “adjacent” does not include “neighboring.”  The proposal specifically excludes wetlands “physically separated” from other jurisdictional waters by a dike or similar structure and lacking a direct hydrologic surface connection to a jurisdictional water..

*Both the 2015 rule and the 2018 proposal specifically exclude from the definition of “waters of the United States” the following: waste-treatment systems, groundwater, prior converted cropland (unless the area is allowed to revert to a wetland), stormwater-control features, wastewater-recycling structures on dry land, artificially irrigated areas that would be dry without irrigation, constructed lakes and ponds created in dry land, and water-filled depressions in dry land incidental to mining or construction.

Federal Register, “Clean Water Rule: Definition of the ‘Waters of the United States,’” 6/29/15, online at https://www.federalregister.gov/documents/2015/06/29/2015-13435/clean-water-rule-definition-of-waters-of-the-united-states.  This site has the text of the final rule published by the Obama Administration. For the actual language of what was included in the “Waters of the United States” definition, see Part 328, starting on Federal Register page 37104.  A PDF of the published rule is available at this link: https://www.gpo.gov/fdsys/pkg/FR-2015-06-29/pdf/2015-13435.pdf; the definition language of Part 328.3 starts on page 52 of the PDF version.

U.S. Environmental Protection Agency (EPA), “Waters of the United States (WOTUS) Rulemaking,” online at https://www.epa.gov/wotus-rule.  This site has a link to a PDF of the rule being proposed by the Trump administration (as announced on December 11, 2018), online at https://www.epa.gov/sites/production/files/2018-12/documents/wotus_2040-af75_nprm_frn_2018-12-11_prepublication2_1.pdf; the definition language of Part 328.3 starts on page 185 of the PDF.

Virginia Water Resources Research Center/Water Central News Grouper, Clean Water Act Jurisdiction and the “Waters of the United States” is Focus of “Clean Water Rule” Announced May 27, 2015, by U.S. EPA and Army Corps of Engineers, and Proposed for Repeal by Trump Administration in June 2017; last updated November 2017.  This post has background and details on the Obama administration rule that the Trump administration’s proposed rule would replace.

Annie Snider, In major shift, new rule excludes some wetlands, ponds, Greenwire, 5/28/15. Greenwire is a publication of Environment and Energy Publishing, http://www.eenews.net/; a subscription is required for online access.

World Geography Course
WG.2 – how selected physical and ecological processes shape the Earth’s surface, including climate, weather, and how humans influence their environment and are influenced by it.