Except as otherwise noted, all Web addresses mentioned were functional as of 12-7-18.

From the Cumberland Gap to the Atlantic Ocean, this is Virginia Water Radio for the week of December 10, 2018.

This week, in a revised version of a December 2011 episode, that music sets the stage for describing some biochemical and electro-chemical aspects of the water-based environment inside of us.  Have a listen for about 45 more seconds.

You’ve been listening to part of “Pack of Neurons,” by Bob Gramann of Fredericksburg, Va., on his 2008 album, “Mostly Live.”  According to Mr. Gramann, the title “Pack of Neurons” was inspired by the use of that phrase in The Astonishing Hypothesis, a 1994 book by Francis Crick on human consciousness.   Dr. Crick shared the 1962 Nobel Prize in Physiology or Medicine with James Watson and Maurice Wilkins for their discoveries of the structure of the DNA molecule.

Mr. Gramann’s song is a light-hearted look at the fundamental role of neurons, or nerve cells, in transmitting the electrical impulses that control humans’ mental and physical processes.  Those nerve impulses are transmitted along neurons by changes in the concentration of electrically-charged atoms of sodium and potassium. Water is vital as the solvent for those charged atoms, known as ions.  And not just in neurons, but in all biological cells, a water-based solution is the medium in which biochemical substances exist and react. In words from 1970 by famous chemist Linus Pauling,  “One of the most striking properties of water is its ability to dissolve many substances,” and “solutions are very important kinds of matter—important for industry and for life.”

Thanks to Bob Gramann for permission to use this week’s music, and we close with about 15 more seconds of “Pack of Neurons.”

“Pack of Neurons,” from the 2008 album “Mostly Live,” is copyright by Bob Gramann, used with permission.  Bob Gramann’s Web site is http://www.bobgramann.com/. 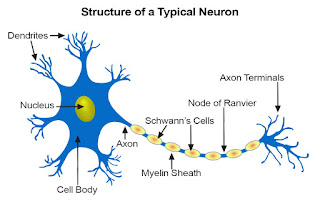 Diagram of a neuron. Image from the National Institutes of Health/National Cancer Institute, “SEER Training Modules: Introduction to the Nervous System—Nerve Tissue,” online at https://training.seer.cancer.gov/anatomy/nervous/.

The following information is quoted from National Institutes of Health/National Cancer Institute, “SEER Training Modules: Review: Introduction to the Nervous System,” online at https://training.seer.cancer.gov/anatomy/nervous/review.html, as of 12/7/18.

*The nervous system is the major controlling, regulatory, and communicating system in the body. It is the center of all mental activity including thought, learning, and memory.

*The various activities of the nervous system can be grouped together as three general, overlapping functions: sensory, integrative, and motor.

*Neurons are the nerve cells that transmit impulses.  Supporting cells are neuroglia.

*The three components of a neuron are a cell body or soma, one or more afferent processes called dendrites, and a single efferent process called an axon.

*There are three layers of meninges around the brain and spinal cord.  The outer layer is dura mater, the middle layer is arachnoid, and the innermost layer is pia mater.

For More Information about the Human Nervous System

All Water Radio episodes are listed by category at the Index link above (http://www.virginiawaterradio.org/p/index.html).  See particularly the “Science” subject category.

Following are links to other episodes related to water and the human body.

2013 Music SOLs
SOLsat various grade levels that call for “examining the relationship of music to the other fine arts and other fields of knowledge.”