All Web addresses mentioned were functional as of 12-2-16.

From the Cumberland Gap to the Atlantic Ocean, this is Virginia Water Radio for the week of December 5, 2016.

This week, that excerpt from a video created by Sgt. David Erskine of the South Carolina National Guard, opens our review of the 2016 Atlantic tropical storm season, which officially ended on November 30. The season in the Atlantic basin—including the Atlantic Ocean, Caribbean Sea, and Gulf of Mexico—officially begins June 1, but this year’s first storm formed in mid-January. Hurricane Matthew in late September and early October was the most powerful and destructive of this season’s 15 named Atlantic storms. It devastated Haiti, struck Cuba and the Bahamas, and then brought storm surge, strong winds, heavy rain, and flooding to the U.S. East Coast. Damage in Virginia led to federal disaster assistance in seven southeastern cities and two southeastern counties. For some insight into the kinds of responses a destructive hurricane can require, let’s have a listen for about 90 seconds to two people involved in responding to Matthew: first, a North Carolina National Guard member; and second, U.S. Coast Guard Rear Admiral Dan Abel, Director of Operations for the Southern Command.

Sgt. Daren Deese, NC National Guard member: “I’m Sgt. First Class Deese, Daren Deese, I’m from Pembroke, N.C., right here in Robinson County. Once the storm came through, Robinson County got hit pretty hard with flooding in the area. ...After being in the Guard 15 years, yesterday was the first time I took a convoy of seven vehicles to the high school I graduated from, with 720 cots, blankets, toddler supplies, diapers, wipes. And when I pulled up...I could see the glow on the faces of people I knew personally, on a personal level....”

U.S. Coast Guard Rear Admiral Dan Abel, Director of Operations for the Southern Command: “We always have Joint Task Force Bravo, which has some phenomenal aviation heavy capabilities, in Honduras. Also during the hurricane season, we have Special Purpose MGTF, the Marines—again, heavy aviation—that’s also deployed. And having those tools ready, already sources to us and in theater, was critical to making this [the response to Hurricane Matthew in the Caribbean] happen. ...The other thing we really had going for us is the Navy, [which] had to dispatch/sortie their vessels anyway out of Norfolk, made the decision...to embark on those ships emergency-response forces, assets, stores, aircraft. So they didn’t just put to sea for hurricane avoidance, they put to sea prepared to join in any response that may be there. And, boy, did we put them to use as well. The response from the sea was huge.”

As destructive as Matthew was, it—of course—wasn’t the whole story of the 2016 Atlantic season. The 15 named storms included seven hurricanes and three major hurricanes, that is, Category 3 or above, a bit above the average annual numbers from 1981 to 2010. Five named storms made landfall in the United States, the most since six occurred in 2008. And the “accumulated cyclone energy” for 2016—combining strength and duration of storms—was about 40 percent above the 1981-2010 average, largely due to three relatively strong and long-lived storms: major hurricanes Matthew, Gaston, and Nicole.

Thanks to the Defense Video and Imagery Distribution System for making this week’s sounds available for public use. And we close with a few more seconds of music from Sgt. Erskine’s Hurricane Matthew video.

This episode’s sounds were excerpted from the public-domain videos listed below, all accessed at the audio link of the Defense Video and Imagery Distribution System (DVIDS), using the site’s “Hurricane Matthew” tag, online at https://www.dvidshub.net/tags/video/hurricane-matthew:

“JTF-Matthew -- A SOUTHCOM story,” by Raymond Sarracino, U.S. Southern Command, Miami, Fla., 11/3/16. This was an interview with Rear Adm. Dan Abel, U.S. Coast Guard Director of Operations for the U.S. Southern Command (SOUTHCOM), who describes his command’s role in humanitarian operations in the Caribbean during Hurricane Matthew in October 2016. 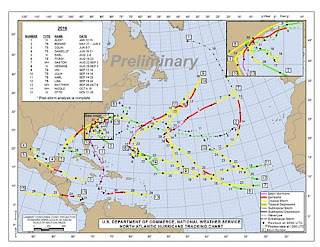 Hurricane Center’s graph of preliminary (subject to verification) tracks of Atlantic tropical storms and hurricanes in 2016, as of 12-1-16; accessed at http://www.nhc.noaa.gov/text/MIATWSAT.shtml. 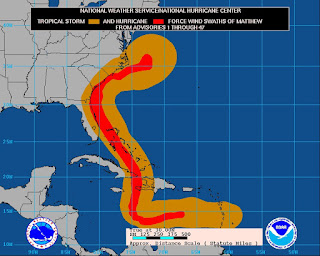 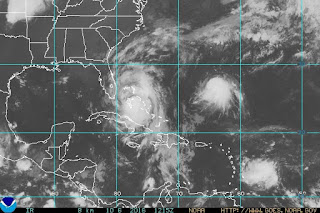 Hurricane Matthew (Category 3 at the time), centered over the Bahamas; and Tropical Storm Nicole in the Atlantic east of the Bahamas, 10/6/16, 8:15 a.m. EDT. Photo accessed at the National Oceanic and Atmospheric Administration (NOAA) Web site at http://www.goes.noaa.gov/browsh.html, on 10/6/16, 9:00 a.m. EDT. NOTE: Z, or Greenwich Mean Time, shown on the photo is 4 hours ahead of EDT and 5 hours ahead of EST.

EXTRA INFORMATION FOR THIS EPISODE

The average annual numbers of Atlantic tropical cyclones from 1981 to 2010 is 12 named storms, six hurricanes, and three major hurricanes. 2016 overall, according to the National Hurricane Center, was the first “above-normal” Atlantic tropical storm season since 2012.

FOR MORE INFORMATION ABOUT TROPICAL STORMS

National Weather Service, “Tropical Weather,” part of “JetStream—An Online School for Weather,” online at http://www.srh.noaa.gov/srh/jetstream/tropics/tropics_intro.html. This site has information on the history and science of tropical storms. The main JetStream site, at http://www.srh.noaa.gov/srh/jetstream/index.html, has information about many other weather topics, too.

All Water Radio episodes are listed by category at the Index link (http://www.virginiawaterradio.org/p/index.html); see particularly the “Weather/Natural Disasters” subject category.

STANDARDS OF LEARNING (SOLs) FOR VIRGINIA TEACHERS
The episode may help with the following Virginia 2010 Science SOLs:

World Geography Course
WG.2 - how selected physical and ecological processes shape the Earth’s surface, including how humans influence their environment and are influenced by it.
WG.4 - types and significance of natural, human, and capital resources.
WG.18 - cooperation among political jurisdictions to solve problems and settle disputes.

Virginia’s SOLs are available from the Virginia Department of Education, online at http://www.doe.virginia.gov/testing/.
Posted by Alan Raflo at 12:06 PM