All Web addresses mentioned were functional as of 12-9-16.

From the Cumberland Gap to the Atlantic Ocean, this is Virginia Water Radio for the week of December 12, 2016.

This week, those sounds from Virginia’s York River State Park open our episode about a center of native American civilization that existed along the York for hundreds of years before Virginia’s first English settlement at Jamestown. Have a listen for about 40 seconds to some more sounds from the river, accompanied by music inspired by that center of civilization, and see if you can guess the complicated name for the place.

If you guessed Werowocomoco, you’re right! The site beside the York River’s Purtan Bay in Gloucester County was the center of the Powhatan Chiefdom of Algonquian Indians for centuries prior to European settlement. The music you heard is called “In Powhatan’s Realm,” by Timothy Seaman of Williamsburg, who used flutes, drums, and a rattle to create a musical image of Werowocomoco. At one time, that realm, called Tsenacomacoh by the Algonquians, covered much of the area between the James and Potomac Rivers and was home to some 30 native tribes with thousands of people collectively. At the heart of it was Werowocomoco, “the place of kings” in Algonquian language, described by archaeologist Martin Gallivan, of the College of William and Mary, as the Powhatan Chiefdom’s “Vatican, Washington, and New York City all combined in one place.”

On November 30, 2016, the National Park Service publicly announced its purchase of 264 acres of the site; it will eventually become part of the Captain John Smith Chesapeake National Historic Trail, which follows Smith’s exploration of the Chesapeake and its tributary rivers in 1607 and 1609. Among the most well-known of the events of Smith’s exploration in 1607 is his report of being saved from death by the intervention of Pocahontas, the daughter of Chief Powhatan. There’s continuing debate over this legend, but, according to William and Mary’s Martin Gallivan, whatever actually happened took place at Werowocomoco, and so did many other events of significance to the history of Virginia.

Thanks to Timothy Seaman for recording this week’s sounds and for permission to use this week’s music. We close with a few more seconds of “In Powhatan’s Realm.”

“In Powhatan’s Realm,” on the 2006 album “Jamestown: On the Edge of a Vast Continent,” is copyright by Timothy Seaman and Pine Wind Music, used with permission. More information about Mr. Seaman’s music is available online http://timothyseaman.com/.

The sounds from York River State Park were recorded by Timothy Seaman at Croaker Landing on December 5, 2016. 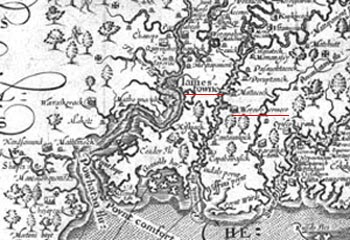 From the National Park Service, “Werowocomoco Planning,” online at https://www.nps.gov/cajo/getinvolved/werowocomoco-planning.htm, as of 12/12/16:
“Werowocomoco is the location of the leader Powhatan's headquarters during the time of the English arrival at Jamestown in 1607 and the location where Captain John Smith was taken after his capture. ­­ It was here that Smith met the influential Powhatan and his daughter Pocahontas. Archaeology indicates it had been a major town for several centuries before Powhatan.

“The Conservation Fund, a not-for profit 501(c)3 national conservation organization, recently purchased 264 acres of land in Gloucester County VA encompassing the historic site known as Werowocomoco. The Conservation Fund then transferred the property to the National Park Service to ensure its permanent protection. The site is one of the most important Virginia archeological finds in recent history, and its protection, study and interpretation to the public are of high importance.

“The Captain John Smith Chesapeake National Historic Trail will manage the property for the National Park Service. Werowocomoco has long been identified as a high potential historic site in the trail's comprehensive management plan and conservation strategy.

“The site is not yet open to public visitation. National Park Service staff will begin a collaborative planning and design process for guiding future management of Werowocomoco. The process and resulting plan will address visitor use and facilities, interpretation, education, and overall resource protection.

“Many Virginia Indian Tribes have a great deal of interest in Werowocomoco, and we will be working with them to make sure that use of the site is respectful of their heritage.

“We anticipate initiating the planning/design process by early 2017.”

From the National Park Service, “Historic Jamestowne/Pocahontas: Her Life and Legend,” by Sarah J. Stebbins, August 2010, online at https://www.nps.gov/jame/learn/historyculture/pocahontas-her-life-and-legend.htm:
“[Pocahontas] was the daughter of Wahunsenaca (Chief Powhatan), the mamanatowick (paramount chief) of the Powhatan Chiefdom. At its height, the Powhatan Chiefdom had a population of about 25,000 and included more than 30 Algonquian speaking tribes—each with its own werowance (chief). The Powhatan Indians called their homeland ‘Tsenacomoco.’

“...What happened next is what has kept the names of Pocahontas and Captain John Smith inextricably linked: the famous rescue of John Smith by Pocahontas. As Smith tells it, he was brought in front of Chief Powhatan, two large stones were placed on the ground, Smith's head was forced upon them, and a warrior raised a club to smash in his brains. Before this could happen, Pocahontas rushed in and placed her head upon his, which stopped the execution. “Whether this event actually happened or not has been debated for centuries. One theory posits that what took place was an elaborate adoption ceremony; its adherents believe that Smith's life was never in danger (though, he most likely would not have known that). Afterwards, Powhatan told Smith he was part of the tribe. In return for ‘two great guns and a grindstone,’ Powhatan would give Smith Capahowasick (on the York River), and ‘forever esteem him as his son Nantaquoud.’ Smith was then allowed to leave Werowocomoco.”

Jamestown Settlement and American Revolution Museum at Yorktown, “Werowocomoco: Seat of Power ,” April 16, 2010 video (3 min./00 sec.), available online at https://www.youtube.com/watch?v=YUhH24SXrLEl; and special museum exhibit in 2010-11, Web site at http://www.historyisfun.org/exhibitions/collections-and-exhibitions/special-exhibitions/werowocomoco/.  The video tells the story of the founding of Jamestown and its connection to Werowocomoco, including footage historical reenactors in the lands and waters of the area.

Virginia Places, “Werowocomoco,” online at http://www.virginiaplaces.org/vacities/werowocomoco.html. This is a detailed article with images, maps, and informative references.

All Water Radio episodes are listed by category at the Index link above (http://www.virginiawaterradio.org/p/index.html). See particularly the “History” subject category and the Rivers, Streams, and Other Surface Water” subject category.

The episode may help with 2013 Music SOLs at various grade levels that call for “examining the relationship of music to the other fine arts and other fields of knowledge.”

This episode may also help with the following 2010 Science SOLs:

Grades K-6 Civics Theme
2.2 – lives and contributions of three American Indian cultures of the past and present (Powhatan, Lakota, Pueblo).
2.4 – regions of the Powhatan, Lakota, and Pueblo Indians, and understanding the environment and culture of these peoples.

Virginia Studies Course
VS.2 – physical geography and native peoples of Virginia past and present.
VS.3 – first permanent English settlement in America.

World Geography Course
WG.6 - past and present trends in human migration and cultural interaction as influenced by social, economic, political, and environmental factors.

The episode may also help with the following 2015 Social Studies SOLs, which become effective in the 2017-18 school year:

Grades K-6 Civics Theme
2.3 – lives and contributions of three American Indian cultures of the past and present (Powhatan, Lakota, Pueblo).
2.7 – regions of the Powhatan, Lakota, and Pueblo Indians, and understanding the environment and culture of these peoples.

Virginia Studies Course
VS.2 – physical geography and native peoples of Virginia past and present.
VS.3 – first permanent English settlement in America.

World Geography Course
WG.15 – past and present trends in migration and cultural diffusion, including effects of environmental factors.