Unless otherwise noted, all Web addresses mentioned were functional as of 3-6-20.

From the Cumberland Gap to the Atlantic Ocean, this is Virginia Water Radio for the week of March 9, 2020.

This week, that mystery sound opens an episode about an early breeding frog commonly found in the eastern half of Virginia as well as throughout the southern United States.  Have a listen for about 10 more seconds and see if you know this frog.  And here’s a hint: think of a big cat and you’ll hit the spot on part of this amphibian’s name.

If you guessed a leopard frog, you’re right!  You heard the male breeding call of the Coastal Plains Leopard Frog, from the 2008 CD, “The Calls of Virginia Frogs and Toads,” by the Virginia Department of Game and Inland Fisheries and Lang Elliott’s NatureSound Studio.  On that CD, the call is identified as that of the Southern Leopard Frog, which until a few years ago was the common name of this species.  The now Coastal Plains Leopard Frog is one of several North American species of leopard frog, including the Northern, Plains, Rio Grande, and Mid-Atlantic Coast leopard frogs; the latter is a newly confirmed species, just scientifically documented in 2014.  The leopard frogs, along with the Bullfrog, Green Frog, and several other species, and are in the scientific genus called Lithobates, meaning “stone that walks.”

The Coastal Plains Leopard Frog is found from Long Island, New York, to Florida, across the South to Texas, and up the Mississippi River basin to parts of the Midwest.  In Virginia, it breeds relatively early, starting in March when large groups gather and males begin making advertisement calls, such as you heard earlier.  This frog inhabits ponds, swamps, ditches, stream margins, and other freshwater habitats, as well as somewhat salty coastal marshes, although it can venture some distance from water if plants are available for cover and shade.  Its food is primarily insects that it hunts on land; in turn, it’s preyed upon by a variety of animals, including birds, mammals, and various snakes that eat adult frogs, while eggs and tadpoles are eaten by fish, salamanders, aquatic insects, and fishing spiders.

Thanks to the Virginia Department of Game and Inland Fisheries and to Lang Elliott for permission to use this week’s sounds, and we let Coastal Plains Leopard Frogs have the last call.

The Coastal Plains/Southern Leopard Frog sounds in this episode were from “The Calls of Virginia Frogs and Toads” CD, copyright 2008 by the Virginia Department of Game and Inland Fisheries (VDGIF) and Lang Elliott/NatureSound Studio, used with permission.  For more information on this CD, contact VDGIF online at https://www.dgif.virginia.gov/; by mail to P.O. Box 90778, Henrico, VA 23228-0778; by phone to (804) 367-1000 (VTDD); or by e-mail to dgifweb@dgif.virginia.gov.

Thanks to Kevin Hamed, Virginia Tech Department of Fish and Wildlife Conservation, for his help with this episode. 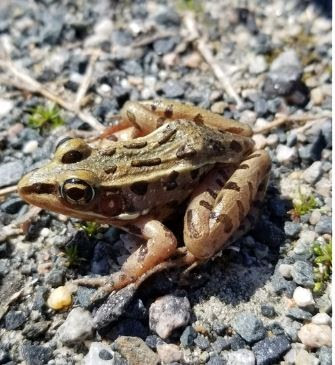 Coastal Plains Leopard Frog, photographed at Assateague Island National Seashore in Virginia, April 7, 2019.  Photo by Joe Schell, made available on iNaturalist at https://www.inaturalist.org/observations/22151626 (as of 3-8-20) for use under Creative Commons license “Attribtution-NonCommercial 4.0.”  Information about this Creative Commons license is available online at https://creativecommons.org/licenses/by-nc/4.0/.

The following information on this species is quoted from the Virginia Department of Game and Inland Fisheries (VDGIF), “Fish and Wildlife Information Service/Life History Chapter for Frog, Coastal Plains Leopard,” online at https://vafwis.dgif.virginia.gov/fwis/booklet.html?Menu=_.Life+History&bova=020016&version=18325.

“This species reaches lengths between 51 and 90 mm [millimeters] (2-3.5 in).  The record length is 5 inches. The dorsal coloration is brown, green or some combination.  There are a variable number of longitudinally elongated dorsal spots which may be entirely absent.  The side of the body has only a few dark spots.  There is a distinct light spot in the center of the tympanum [ear] and a light line along the upper jaw.”

“This species breeds in winter or early spring, occasionally in the fall.  The male breeding call is described as a series of 3 to 5 guttural croaks followed by 2 or 3 ‘clucks,’ resembling the sound made by rubbing an inflated balloon. Males are difficult to approach when calling. …The female attaches a cluster of several hundred eggs to vegetation submerged immediately beneath the water surface.  Eggs will hatch in 1-2 weeks. …Metamorphosis occurs in about 3 months when the tadpole reaches 65-70 mm.”

“This species is found in all types of freshwater habitats [but more frequently is associated with ponds, ditches, swamps, and lake and stream margins] and even enters slightly brackish coastal marshes.  They forage mostly on land. Insects are their primary prey item though they also feed on other arthropods and worms.  This species will travel away from water when vegetation is available to provide shelter and shade.”

John D. Kleopfer and Chris S. Hobson, A Guide to the Frogs and Toads of Virginia, Virginia Department of Game and Inland Fisheries/Bureau of Wildlife Resources Special Publication Number 3, Richmond, 2011.  Includes the CD “The Calls of Virginia Frogs and Toads,” 20008, copyright by Virginia Department of Game and Inland Fisheries and Lang Elliott’s NatureSound Studio.

J.C. Mitchell and K.K. Reay, Atlas of Amphibians and Reptiles in Virginia, Virginia Department of Game and Inland Fisheries/Richmond (1999); available online at https://www.virginiaherpetologicalsociety.com/atlases/mitchell-atlas.pdf, courtesy of the Virginia Herpetological Society.

Virginia Department of Game and Inland Fisheries, “Wildlife Information,” online at https://www.dgif.virginia.gov/wildlife/information/.  A list of 85 amphibians, including 28 frogs and toads, found in Virginia is online at this link.  The Southern Leopard Frog (Lithobates sphenocephalus) entry is online at https://www.dgif.virginia.gov/wildlife/information/southern-leopard-frog/.

For More Information about Frogs and Other Amphibians

AmphibiaWeb, “Order Anura—Frogs and Toads Species List,” online at https://amphibiaweb.org/lists/alpha/A-Ate-Anura.shtml.  Note that this site uses the older name Rana for the genus Lithobates (as of 3-6-20).

FrogWatch USA, online at https://www.aza.org/frogwatch.  According to this Web site, this is the American Zoological Association (AZA)'s “citizen science program and provides individuals, groups, and families opportunities to learn about wetlands in their communities by reporting on the calls of local frogs and toads.”

Virginia Department of Game and Inland Fisheries, “Virginia is for Frogs” Web site, online at http://www.dgif.virginia.gov/wildlife/virginia-is-for-frogs/.

All Water Radio episodes are listed by category at the Index link above (http://www.virginiawaterradio.org/p/index.html).  See particularly the “Amphibians” subject category.

Following are links to episodes on other frog species in Virginia in the Lithobates genus (the genus that includes the Coastal Plains Leopard Frog).