All Web addresses mentioned were functional as of 2-28-20.

From the Cumberland Gap to the Atlantic Ocean, this is Virginia Water Radio for the week of March 2, 2020.

This week, we feature original music inspired by a large group of reptiles known by many names and ranging worldwide from arid areas to freshwater habitats.  Have a listen to the music for about 25 more seconds, and see if you know this group of reptiles.  And here’s a hint: if you guess this, you may be a reptile wizard.

If you guessed lizards, you’re right! You’ve been listening to “Lizard Lied,” by Torrin Hallett, a student at Manhattan School of Music in New York.  Over 5600 species of animals worldwide are classified in the scientific group of lizards.  This group includes animals commonly called lizards as well as those commonly called anoles, chameleons, geckos, iquanas, skinks, racerunners, whiptails, and wormlizards.  Although lizards are the largest single group of living reptiles worldwide, their variety in Virginia is relatively low.  Virginia has nine native species, including five kinds of skinks, two glass lizard species, one racerunner, and the Eastern Fence Lizard, a type of spiny lizard.  The Commonwealth also currently is known to have two introduced, non-native species, the Italian Wall Lizard and the Mediterranean Gecko.

Virginia’s lizards live in a variety of land habitats, including trees, logs, rocks, soils, ground debris, and sometimes human structures.  They eat primarily a variety of insects, spiders, and snails, plus in some cases other lizards, small snakes, and small mammals; in turn, lizards are prey for various snakes, some birds, and domestic dogs and cats.   Some lizard species can shed their tail if it’s grabbed by a predator, regrowing the tail later.

No lizard species worldwide is truly aquatic, in that it lives exclusively in water or feeds exclusively on aquatic organisms.  But about 70 lizard species are known to use freshwater habitats for food or to escape from predators, including some species that can run across waters.  In the Commonwealth, two lizards with water connections are the Northern Coal Skink, a high-elevation species known to live near water and use it in fleeing predators; and the Eastern Glass Lizard, a state threatened species, known to inhabit various wet or damp grassy areas near marshes in eastern Virginia.

Thanks to Torrin Hallett for this week’s music, and we close with the last 10 seconds of “Lizard Lied.”

Virginia Water Radio is produced by the Virginia Water Resources Research Center, part of Virginia Tech’s College of Natural Resources and Environment.  For more Virginia water sounds, music, or information, visit us online at, or call the Water Center at (540) 231-5624.  Thanks to Stewart Scales for his banjo version of Cripple Creek to open and close this show.  In Blacksburg, I’m Alan Raflo, thanking you for listening, and wishing you health, wisdom, and good water.

“Lizard Lied” is copyright 2020 by Torrin Hallett, used with permission.  (“Lied” is the German word for song.)  Torrin is a 2018 graduate of Oberlin College and Conservatory in Oberlin, Ohio; as of 2020, he is a graduate student in Horn Performance at Manhattan School of Music in New York.  More information about Torrin is available online at https://www.facebook.com/torrin.hallett.  Thanks very much to Torrin for composing the piece especially for Virginia Water Radio. 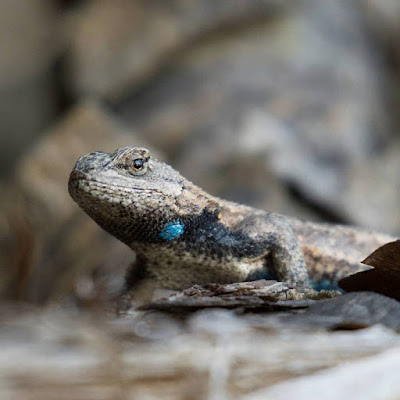 Eastern Fence Lizard (Sceloporus undulatus), photographed in Maryland in August 2018.  Photo by Grayson Smith, made available for public use by the U.S. Fish and Wildlife Service's National Digital Library, online at http://digitalmedia.fws.gov; specific URL for the photo is https://digitalmedia.fws.gov/digital/collection/natdiglib/id/32797/rec/14 (as of 3-2-20). 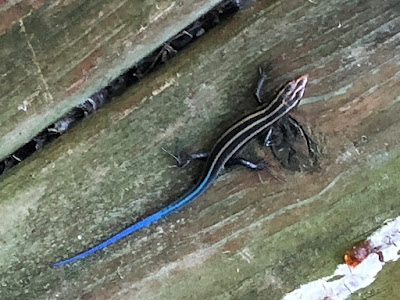 Common Five-lined Skink (Plestiodon fasciatus), photographed in Virginia Beach, Va., July 22, 2019.  Photo by Beth Deir, made available on iNaturalist at https://www.inaturalist.org/observations/29385428 (as of 3-2-20) for use under Creative Commons license “Attribtution-NonCommercial 4.0.”  Information about this Creative Commons license is available online at https://creativecommons.org/licenses/by-nc/4.0/.

EXTRA INFORMATION ABOUT LIZARDS IN VIRGINIA

Following are lizard species known to occur in Virginia, as of February 2020, listed in alphabetical order of their scientific names (in parentheses and italics).  This list is according to two sources:

Species Not Native to Virginia But Introduced by Humans

Italian Wall Lizard, Podarcis siculus (in Loudoun County, according to VDGIF)
Mediterranean Gecko, Hemidactylus turcicus (reports from several locations since the 1990s but not reported yet to have found an established, reproducing population, according to VHS)

Encyclopedia Britannica, “Lizard/Water Loss and Other Variables,” online at https://www.britannica.com/animal/lizard/Water-loss-and-other-variables.

For More Information about Lizards or Other Reptiles

All Water Radio episodes are listed by category at the Index link above (http://www.virginiawaterradio.org/p/index.html).  See particularly the “Reptiles” subject category.

Biology Course
BIO.6 – bases for modern classification systems, including structures, biochemistry, and developmental stages.
BIO.8 – dynamic equilibria and interactions within populations, communities, and ecosystems; including nutrient cycling, succession, effects of natural events and human activities, and analysis of the flora, fauna, and microorganisms of Virginia ecosystems.