Unless otherwise noted, all Web addresses mentioned were functional as of 5-15-20.

From the Cumberland Gap to the Atlantic Ocean, this is Virginia Water Radio for the week of May 18, 2020.

This week, we drop in on a musically-enhanced, water-insect competition.  The participants have been challenged to figure out the most species-rich group of insects on the planet, and then come up with the distinguishing words for seven aquatic versions of that group.  Have a listen for about 15 seconds to this entomological exercise, and see if you know the name for that overall group of insects.  And here’s a hint: the name sounds like a revolutionary, four-member rock band.

If you guessed beetles, you’re right!  You heard part of “Beetle Ballet,” by Torrin Hallett, underlying the descriptive names of seven water beetle families.  Scientists categorize beetles into a taxonomic group called an order, and beetles are the most diverse order of animals, with a current estimate of about 390,000 species worldwide.  Perhaps as many as 20,000 of those species are water beetles.  The seven kinds of water beetles you heard, out of about 20 North American families, are among the most commonly found on this continent, with the predaceous diving beetle family and the water scavenger beetle family having the largest number of species.

As a group, water beetles occupy all kinds and sizes of aquatic and semi-aquatic habitats, such as ponds, lakes, and other still waters; streams and rivers; various kinds of wetlands; temporary habitats like puddles; and a variety of moist areas on coastal shorelines.  Beetles that inhabit water typically do so both as adults and in their immature, larval stage; but some, like Water Pennies, are terrestrial as adults, and Long-toed Water Beetles have terrestrial larvae.  All beetle adults have two pairs of wings, with the forewings forming a hardened sheath of the membranous hind wings, and many water beetles are able to hold under those forewings a bubble of air that allows them to breathe while submerged.  Feeding habits among the thousands of water beetle species vary widely, both in what they eat and in how they acquire their food.

Water beetles have many remarkable adaptations and biological variations.  Here’s one example: Whirligig beetles, which can be seen swimming in circles on the surface of ponds, lakes, and still water on stream margins, have eyes divided into an upper and lower half; the upper half can see above the water surface, while the lower half can see below.

Thanks to several Blacksburg, Va., friends for lending their voices to this episode.  Thanks also to Torrin Hallett for composing this week’s music especially for Virginia Water Radio, and we close with the last 20 seconds of “Beetle Ballet.”

“Beetle Ballet” is copyright 2020 by Torrin Hallett, used with permission.  Torrin is a 2018 graduate of Oberlin College and Conservatory in Oberlin, Ohio; as of 2020, he is a graduate student in Horn Performance at Manhattan School of Music in New York.  More information about Torrin is available online at https://www.facebook.com/torrin.hallett.  Thanks very much to Torrin for composing the piece especially for Virginia Water Radio. To hear the complete piece (39 seconds), please click here.

The water beetle family names call-outs were recorded by several Blacksburg, Va., residents in May 2020. 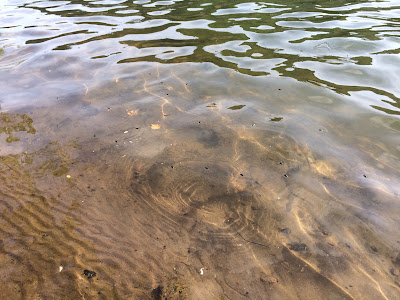 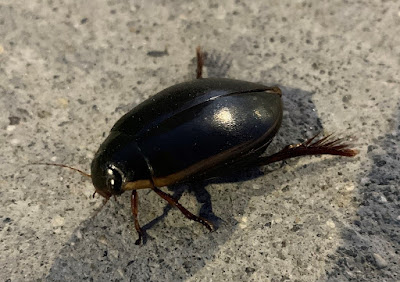 A species of predaceous diving beetle, Virginia Beach, Va., April 10, 2019.  Photo by Laura Bankey, made available on iNaturalist at https://www.inaturalist.org/observations/22308991 (as of 5-18-20) for use under Creative Commons license “Attribtution-NonCommercial 4.0.”  Information about this Creative Commons license is available online at https://creativecommons.org/licenses/by-nc/4.0/.

As noted in the audio, scientists classify beetles scientific classification level called an order.  The scientific names for the beetles order is Coleoptera.  Other orders of familiar insects include Diptera, the order of “true flies”; Hymenoptera, the order of ants, bees, and wasps; and Lepidoptera, the order of butterflies and moths.  (For one list of all insect orders, see Iowa State University’s BugGuide, online at https://bugguide.net/node/view/222292.)

Families are groups within orders.  Following is some information on the beetles families that include water beetles, that is, beetles that live in or closely associated with aquatic habitats.

J. Reese Voshell, in A Guide to Common Freshwater Invertebrates of North America (McDonald and Woodward, Blacksburg, Va., 2002; (pages 359-368), lists the following seven beetle families as “common in freshwater habitats” in North America.  The families are listed in alphabetical order by common name, with the scientific names for the family in parenthesis.

R. W. Merritt and K. W. Cummins, in An Introduction to the Aquatic Insects of North America, 2nd Edition (Kendall/Hunt, Dubuque, Ia., 1984; (pages 427-437), list the following 21 beetle families as having aquatic or semi-aquatic species in North America (connected either to fresh waters, estuaries, or marine waters).  The families are listed in alphabetical order by scientific name, followed by the family’s common name.

Iowa State University Department of Entomology, “Bug Guide/Order Coleoptera - Beetles,” online at https://bugguide.net/node/view/60.  This is the source used for the total number of beetle species worldwide.

Virginia Department of Game and Inland Fisheries, “Fish and Wildlife Information Service,” online at http://vafwis.org/fwis/?Title=VaFWIS+Species+Information+By+Name&vUT=Visitor. Entries for beetles are available at this link.

Many field guides to insects are available from book stores or other supplies.

All Water Radio episodes are listed by category at the Index link above (http://www.virginiawaterradio.org/p/index.html).  See particularly the “Insects” subject category.

Following are links to other episodes with information related to beetles.

Following are other music pieces composed by Torrin Hallett for Virginia Water Radio, with links to episodes featuring the music.

Biology Course
BIO.6 – bases for modern classification systems, including structures, biochemistry, and developmental stages.
BIO.8 – dynamic equilibria and interactions within populations, communities, and ecosystems; including nutrient cycling, succession, effects of natural events and human activities, and analysis of the flora, fauna, and microorganisms of Virginia ecosystems.