All Web addresses mentioned were functional as of 4-13-18.

From the Cumberland Gap to the Atlantic Ocean, this is Virginia Water Radio for the week of April 16, 2018.

This week, we feature a springtime mystery sound.  Have a listen for about 15 seconds to an April 2017 recording, and see if you can guess what bird is making the two-note, buzzing song, which you’ll hear along with a repeating song from another bird.  And here’s a hint: if you have birding FE-ver, your answer may BE correct.

If you guessed an Eastern Phoebe, you’re right!  And if you also recognized the repeating song of a Carolina Wren, you may indeed have birding fever.  The Eastern Phoebe is one of two phoebe species known in Virginia, and it’s one of over 30 North American species in the bird family of flycatchers, known for their habit of hawking, that is, flying out from a perch to catch passing insects.

The Eastern Phoebe is a summer breeding resident in most of Virginia and a year-round resident in the southeastern corner and Eastern Shore.  It’s found in woodlands, often near water sources.  Its nest of mud, moss, grass, and leaves typically is found on rock outcrops or on various human structures, like building eaves, bridges, and culverts, specifically in places somewhat protected from predators.  Those nest predators include raccoons, black rat snakes, chipmunks, mice, coyotes, and various birds. Eastern Phoebes, meanwhile, feed on a variety of flying insects along with other invertebrates, some fruit and seeds, and occasionally fish.  It’s known to respond to occurrences of high insect populations, including aquatic insect hatches and swarms of midges.

We close with a few seconds of music that celebrates springtime’s more active life by birds and by many other creatures, including two-legged ones. Here’s part of “Spring Fever,” by John McCutcheon, from the 1999 album “Springsongs.”

For more Virginia water sounds, music, and information, visit us online at virginiawaterradio.org, or call us at (540) 231-5463.  Virginia Water Radio is produced by the Virginia Water Resources Research Center, part of Virginia Tech’s College of Natural Resources and Environment.  Thanks to Ben Cosgrove for his version of “Shenandoah” to open and close the show.   In Blacksburg, I’m Alan Raflo, thanking you for listening, and wishing you health, wisdom, and good water.

The Eastern Phoebe sound was recorded by Virginia Water Radio on April 16, 2017, in Blacksburg, Va.

“Spring Fever,” from the 1999 album “Four Seasons: Springsongs,” is copyright by John McCutcheon and Rounder Records, used with permission.  More information about John McCutcheon is available online at https://www.folkmusic.com/. 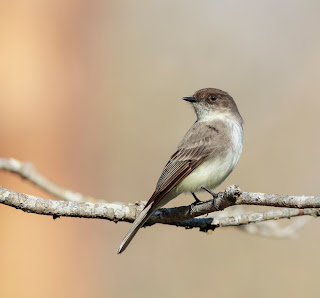 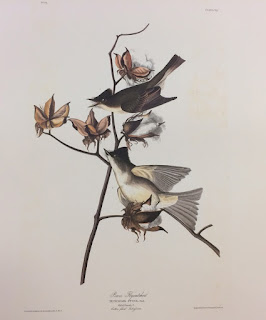 John James Audubon painting of the Pewee Flycatcher—also called Pewit Flycatcher, both of which are older names for Eastern Phoebe—originally published between 1827 and 1838 in Birds of America (plate CXX [120]), as reprinted in 1985 by Abbeville Press, New York.   Photo taken April 16, 2018, from the reprint copy (no. 6 of 350 copies printed in 1985) owned by Special Collections of Virginia Tech Libraries.  Virginia Water Radio thanks Special Collections for permission to photograph their copy and for their assistance.  Information about Birds of America is available from the National Audubon Society, online at http://www.audubon.org/birds-of-america; the Pewit Flycatcher entry is online at http://www.audubon.org/birds-of-america/pewit-flycatcher.   Information linking the Pewit Flycatcher plate to the Eastern Phoebe is available from Zebra Publishing, “Audubon Centennial Edition,” online at http://auduboneditions.com/index.php?go=.images.image&image_id=233&showOrnithologicalDetils=1.

EXTRA FACTS ABOUT THE EASTERN PHOEBE

The scientific name of the Eastern Phoebe is Sayornis phoebe.

Here are some points about the Eastern Phoebe, excerpted from the Virginia Department of Game and Inland Fisheries, “Fish and Wildlife Information Service/Eastern Phoebe,” online at https://vafwis.dgif.virginia.gov/fwis/booklet.html?&bova=040236&Menu=_.Taxonomy&version=17631.

Physical Description
“Males are 144-168 millimeters (mm) and females are 142-165 mm.  Males are generally larger than females. However, determining sex by size or plumage is not reliable.  Top of head clove-brown; back grayish olive-brown; bill blackish above and below; wings without conspicuous bars; underparts yellowish white or pale yellow; sides washed with grayish olive.  Most distinguishing behavioral characteristic is the tail wag.”

Nesting Habitat and Behavior
“Nest is generally built on a ledge, usually sheltered above by an overhang, often under eaves or on window ledges, barn beams, or bridge girders.  Nest is generally found in woodland or edge habitats near water, and are constructed of mud, green moss and leaves, and lined with fine grass stems and hair.  Three to eight eggs are laid in spring or summer.  They hatch in 15 to 17 days and nestlings leave nest 15 to 17 days later. Usually phoebes raise 2 broods a year.   Both parents will feed the young, although females feed young more often.  The nesting season ranges from late March to mid-July. …After breeding is completed, the birds disperse to a variety of woodland habitats… The song, ‘fee-bee,’ is sung to attract a female and to announce and defend a territory.  The territory centers on the nest site.  Territory size is from 3 to 7 acres usually, can be much larger is areas where food is not as available.”

Diet
“Hawking is used to forage for flying insects.  The birds appear to forage most actively during the morning hours…. Feed on coleoptera [beetles], orthoptera [grasshoppers and allies], hemiptera [true bugs], lepidoptera [butterflies and moths], diptera [flies], spiders, ticks, millipedes, [and] small fruits and seeds during fall and winter. …Have been seen catching and eating fish.”

Virginia Department of Game and Inland Fisheries, “Fish and Wildlife Information Service,” online at http://vafwis.org/fwis/?Title=VaFWIS+Species+Information+By+Name&vUT=Visitor; the Eastern Phoebe entry is online at https://vafwis.dgif.virginia.gov/fwis/booklet.html?&bova=040236&Menu=_.Taxonomy&version=17631.

For More Information about Birds

Cornell University Lab of Ornithology and the Audubon Society, “eBird,” online at http://ebird.org/content/ebird/.   Here you can find locations of species observations made by contributors, and you can sign up to contribute your own observations.