Except as otherwise noted, all Web addresses mentioned were functional as of 11-2-18.

From the Cumberland Gap to the Atlantic Ocean, this is Virginia Water Radio for the week of November 5, 2018.

This week, that mysterious sound opens a revision of a November 2011 episode about a bird known for its unmistakable wails and yodel-like calls.  Have a listen for about 15 seconds, and see if you can guess this bird. And here’s a hint: even though it doesn’t live on the moon, it’s still LOON-er.

If you guessed a Common Loon, you’re right!

The distinctive calls of loons are associated with lakes and other water bodies in Canada and the northern United States, where five species of loons breed.  Virginia’s coastal areas typically provide winter habitat for two species, the Common Loon and the Red-throated Loon.

According to the Chesapeake Bay Program, thousands of Common Loons coming from northern breeding areas arrive in the Chesapeake region by October or November.  As winter approaches, large flocks continue southward to North Carolina’s Outer Banks.  They’ll return in February and March on their migration back to their summer breeding areas.

Unfortunately for Chesapeake area humans hoping to hear loons, the birds aren’t as vocal in winter as they are in summer. But, according to Alice and Robert Lippson in their book, Life in the Chesapeake Bay, “occasionally on a quiet winter night one will hear [Common Loons’] primeval, tremulous yodel.”

Loons are known for their swimming and diving abilities, and they typically go on land only during breeding.   The Common Loon is seen by many as a symbol of wilderness, and the species has been widely studied for its response to water quality, including the effects of acidic precipitation, lead, mercury, and petroleum spills.

For an historic account of some of the Common Loon’s compelling characteristics, let’s turn to an excerpt from John James Audubon’s description of this bird—which he called the Great Northern Diver—in his early 19th Century work, Birds of America. Audubon wrote: “View it as it buoyantly swims over the heaving billows of the Atlantic, or as it glides along deeply immersed…on the placid lake…; calculate, if you can, the speed of its flight, as it shoots across the sky; mark the many plunges it performs in quest of its finny food, or in eluding its enemies; list to the loud and plaintive notes which it issues…and you will not count your labour lost….”

Thanks to Lang Elliott for permission to use this week’s sounds, from the Stokes Field Guide to Bird Songs.  And let’s give the last word to another cool sound from the Common Loon.

This episode replaces Virginia Water Radio episode 88, 11-14-11, which has been archived.

The loon sounds were taken from the from “Common Loon” on the Stokes Field Guide to Bird Songs-Eastern Region CD set, by Lang Elliott with Donald and Lillian Stokes (Time Warner Audio Books, copyright 1997), used with permission of Lang Elliott, whose work is available online at the “Music of Nature” Web site, http://www.musicofnature.org/.  The Common Loon sound was also used in Episode 294, 12-14-15.  Another loon recording is available from the U.S. Fish and Wildlife Service’s National Digital Library, online at https://digitalmedia.fws.gov/digital/collection/audio/id/57/rec/1, or at http://www.fws.gov/video/sound.htm.

Click here if you’d like to hear the full version (1 min./11 sec.) of the “Cripple Creek” arrangement/performance by Stewart Scales that opens and closes this episode.   More information about Mr. Scales and the group New Standard, with which Mr. Scales plays, is available online at http://newstandardbluegrass.com. 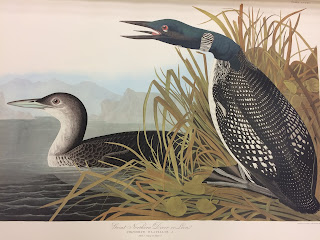 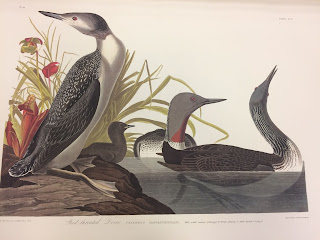 Great Northern Diver, or Loon [Common] (above, top), and Red-throated Loon (above, bottom).  Both images of paintings originally published between 1827 and 1838 by John James Audubon in Birds of America (plates 306 and 202, respectively), as reprinted in 1985 by Abbeville Press, New York.   Photos taken November 5, 2018, from the reprint copy (no. 6 of 350 copies printed in 1985) owned by Special Collections of Virginia Tech Libraries.  Virginia Water Radio thanks Special Collections for permission to photograph their copy and for their assistance.  Information about Birds of America is available from the National Audubon Society,
online at http://www.audubon.org/birds-of-america. 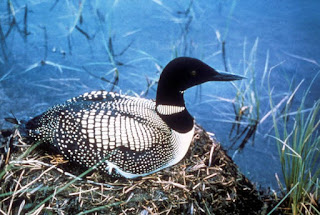 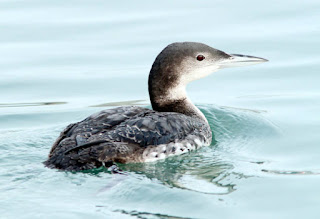 Following is some information on reproduction and feeding by these two species, excerpted from the Virginia Department of Game and Inland Fisheries, “Fish and Wildlife Information Service,” online at http://vafwis.org/fwis/booklet.html?&bova=040001&Menu=_.Taxonomy&version=17836 (Common Loon) and http://vafwis.org/fwis/booklet.html?&bova=040003&Menu=_.Taxonomy&version=17836 (Red-throated Loon).

Reproduction: Breeding season is mid-May to early July, with one reproductive period per year and normally two young.  Nests usually on an island less than one hectare in size or on the mainland, near a lake, pond or marsh; the nest is generally within a few feet of water’s edge and with a direct underwater escape route.

Feeding: Dives to catch (not pierce) fish and other aquatic animals; feeds in deeper portions of lakes, ponds, marshes and ocean.

Reproduction: Breeding season is mid-May to mid-July depending upon latitude, with one reproductive period per year and normally two young; however, if the first clutch is lost, there may be a replacement clutch.  Nests on lakes, ponds, marshes, and bogs, near the water’s edge, on sites typically of one to five hectares.   An important factor in nesting distribution is that the nest site have at least two square kilometers of shallow water coastline.  Generally only one nesting pair is found on a given water body unless the water body is large.

Feeding: Dives for prey in aquatic environments; during breeding season prefers to feed in shoreline zones, usually in water less than one meter deep; also feeds in the ocean.

Mary Reid Barrow, “Crazy as a loon” isn't a fair saying for these winter visitors to the Chesapeake Bay, Virginian-Pilot, 1/26/18.

Virginia Department of Game and Inland Fisheries, “Fish and Wildlife Information Service,” online at http://vafwis.org/fwis/?Title=VaFWIS+Species+Information+By+Name&vUT=Visitor.  Species information for loons known in Virginia is available at this link.

For More Information about Loons or Other Birds