Unless otherwise noted, all Web addresses mentioned were functional as of 11-8-19.

From the Cumberland Gap to the Atlantic Ocean, this is Virginia Water Radio for the week of November 11, 2019.  This is a revised repeat of a Veterans Day episode from November 2013.

That opening flourish of “Armed Forces Medley,” by the U.S. Army Ceremonial Band, opens an episode in recognition of Veterans Day on November 11.  This year marks the 100th anniversary of President Woodrow Wilson’s November 1919 proclamation of the first annual commemoration of “Armistice Day,” the end of World War I on November 11, 1918.  Wilson’s proclamation, along with state observances, started an annual tradition that became a national legal holiday in 1938 and, in 1954, was designated by Congress as Veterans Day.

In this episode of Virginia Water Radio, we first honor U.S. military service members with excerpts from the anthems of all five branches of the armed forces, and then we note some connections between Virginia’s water resources and the nation’s military.  Have a listen for about 90 seconds to the anthem excerpts, all from the Army Ceremonial Band’s version of “Armed Forces Medley.”

You heard parts of the Coast Guard anthem “Semper Paratus” [“Always Ready”], “The Air Force Song,” the Navy anthem “Anchors Aweigh,” “The Marines Hymn,” and “The Army Goes Rolling Along.”

Since the Revolutionary War, Virginia’s coastal location and water-rich geography have made the Commonwealth a site for military bases, ship-building, training, research, and other activities now reaching across all five service branches.   Today, Virginia is home to over two dozen active military bases or other facilities.  Operations on, across, or over water are part of the mission of every armed service, and, in Virginia, water is part of the setting for many military facilities, from Navy, Coast Guard, and joint-force bases in the Hampton Roads region; to the Marines’ base along Quantico Creek and the Potomac River; to the Radford Army Ammunition Plant along the New River in southwestern Virginia.

On Veterans Day and all year round, thanks to all U.S. service members, past and present.  Thanks also to the U.S. Army Ceremonial Band for making this week’s music available for public use, and we close with the ending flourish of “Armed Forces Medley.”

Virginia Water Radio is produced by the Virginia Water Resources Research Center, part of Virginia Tech’s College of Natural Resources and Environment.   For more Virginia water sounds, music, or information, visit us online at virginiawaterradio.org, or call the Water Center at (540) 231-5624.  Thanks to Stewart Scales for his banjo version of Cripple Creek to open and close this show.   In Blacksburg, I’m Alan Raflo, thanking you for listening, and wishing you health, wisdom, and good water.

The version of “Armed Forces Medley” heard here was performed by the United States Army Ceremonial Band, accessed at the “Ceremonial Music Guide” page, online at https://www.usarmyband.com/watch-listen/ceremonial-music-guide.html, 11-6-19.  That page states, “All music files on this page are free for download and duplication.” 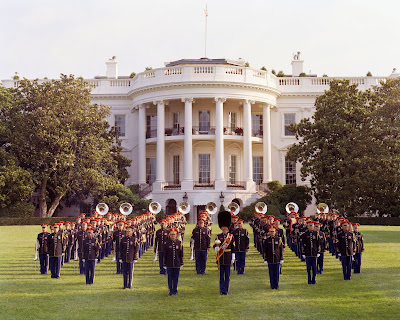 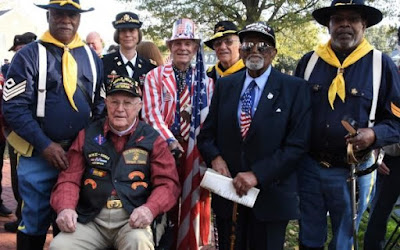 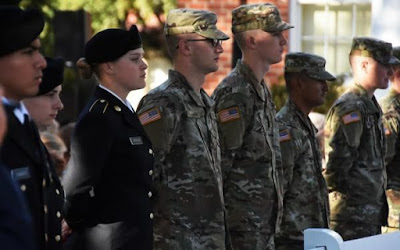 The two photos above are from the November 11, 2019, Veterans Day service at the U.S. Army Garrison Fort Lee in Prince George County, Virginia.  Photos by Stephen Baker, provided online by the Defense Visual Information Distribution Service (DVIDS), at https://www.dvidshub.net/; the specific URL for the images above was https://www.dvidshub.net/search/?filter%5Btype%5D=image&filter%5Bbranch%5D=Army&filter%5Bstate%5D=Virginia&view=grid&filter[date]=20191111-undefinedundefined, as of 11/12/19. The appearance of U.S. Department of Defense (DoD) visual information does not imply or constitute DoD endorsement. (Information on use of these public domain images is available online at https://www.dvidshub.net/about/copyright.)

The information below is quoted from the U.S. Department of Veterans Affairs, “History of Veterans Day,” online at https://www.va.gov/opa/vetsday/vetdayhistory.asp, as of 11/8/19.

“World War I—known at the time as ‘The Great War’—officially ended when the Treaty of Versailles was signed on June 28, 1919, in the Palace of Versailles outside the town of Versailles, France.  However, fighting ceased seven months earlier when an armistice, or temporary cessation of hostilities, between the Allied nations and Germany went into effect on the eleventh hour of the eleventh day of the eleventh month.  For that reason, November 11, 1918, is generally regarded as the end of ‘the war to end all wars.’

“…In November 1919, [U.S.] President [Woodrow] Wilson proclaimed November 11 as the first commemoration of Armistice Day with the following words: ‘To us in America, the reflections of Armistice Day will be filled with solemn pride in the heroism of those who died in the country’s service and with gratitude for the victory, both because of the thing from which it has freed us and because of the opportunity it has given America to show her sympathy with peace and justice in the councils of the nations…’  The original concept for the celebration was for a day observed with parades and public meetings and a brief suspension of business beginning at 11:00 a.m.

“The United States Congress officially recognized the end of World War I when it passed a concurrent resolution on June 4, 1926, with these words:
Whereas the 11th of November 1918, marked the cessation of the most destructive, sanguinary, and far reaching war in human annals and the resumption by the people of the United States of peaceful relations with other nations, which we hope may never again be severed, and

Whereas it is fitting that the recurring anniversary of this date should be commemorated with thanksgiving and prayer and exercises designed to perpetuate peace through good will and mutual understanding between nations; and

Whereas the legislatures of twenty-seven of our States have already declared November 11 to be a legal holiday,

Therefore be it Resolved by the Senate (the House of Representatives concurring), that the President of the United States is requested to issue a proclamation calling upon the officials to display the flag of the United States on all Government buildings on November 11 and inviting the people of the United States to observe the day in schools and churches, or other suitable places, with appropriate ceremonies of friendly relations with all other peoples.

“An Act [of Congress] (52 Stat. 351; 5 U. S. Code, Sec. 87a) approved May 13, 1938, made the 11th of November in each year a legal holiday—a day to be dedicated to the cause of world peace and to be thereafter celebrated and known as ‘Armistice Day.’ Armistice Day was primarily a day set aside to honor veterans of World War I, but in 1954, after World War II had required the greatest mobilization of soldiers, sailors, Marines, and airmen in the Nation’s history, [and] after American forces had fought aggression in Korea, the 83rd Congress, at the urging of the veterans service organizations, amended the Act of 1938 by striking out the word ‘Armistice’ and inserting in its place the word ‘Veterans.’ With the approval of this legislation (Public Law 380) on June 1, 1954, November 11th became a day to honor American veterans of all wars.”

U.S. Army/Army Bands, “‘The Army Goes Rolling Along,’ The Official Song of The United States Army,” online at https://www.bands.army.mil/music/armysong/.

Joint Base Langley-Eustis, online at https://www.jble.af.mil/.

All Water Radio episodes are listed by category at the Index link above (http://www.virginiawaterradio.org/p/index.html).  See particularly the “Community/Organizations” and “History” subject categories.

Following are links to previous Veterans Day episodes on each of the five U.S. service branches.

Virginia Studies Course
VS.1 – impact of geographic features on people, places, and events in Virginia history.
VS.9 – how national events affected Virginia and its citizens.

Virginia and United States History Course
VUS.13 – U.S. foreign policy since World War II, including the role of the military.

Government Course
GOVT. 12 – role of the United States in a changing world, including responsibilities of the national government for foreign policy and national security.