Unless otherwise noted, all Web addresses mentioned were functional as of 7-17-20.

From the Cumberland Gap to the Atlantic Ocean, this is Virginia Water Radio for the week of July 20, 2020.

MUSIC – ~14 sec – instrumental
This week, that excerpt of “East Virginia,” performed by Timothy Seaman of Williamsburg, opens an episode about eastern Virginia groundwater and an ambitious groundwater-related project by the Hampton Roads Sanitation District, or HRSD.

We start with about 70 seconds of comments by David Paylor, the director of the Virginia Department of Environmental Quality, or DEQ, during a January 18, 2017, meeting of the Virginia House of Delegate’s committee on Agriculture, Chesapeake and Natural Resources.

VOICE - ~68 sec – “...one of the most important issues that we have in the Commonwealth, and that’s making sure that we sustain our coastal groundwater resources…. By and large most of what I’ll say today is about the Potomac Aquifer. It is deep, thousands of feet down…and has a lot of water. It does not recharge in the same way that we think of groundwater recharging in the rest of the state. …So we have three issues with making sure that we don’t overuse our aquifer: we’ve got some declining water levels…; we have saltwater intrusion from pumping that’s reversed the flow of water; and we have subsidence, or land sinking. …The HRSD proposal has the potential to re-inject 100 million gallons per day into the aquifer, and it looks like it can work as it stands right now.  That can deal with land subsidence, that can address saltwater intrusion, and it can also address availability of water. … But, as I said, groundwater moves slowly.  So 25, 30 years before we begin to really see significant benefit, but we’ve got to start now.”

As Director Paylor noted, the Potomac Aquifer is a large, deep formation providing groundwater in Virginia’s Coastal Plain region; and this aquifer faces three major issues resulting from decades of withdrawals for human uses: reduced pressure, saltwater intrusion, and sinking land, also called subsidence.  Natural recharge of the aquifer, which occurs near Virginia’s Fall Zone between the Piedmont and Coastal Plain regions, happens too slowly to replace what humans withdraw.  One response to that in recent years has been reductions in the amount of groundwater withdrawals permitted by Virginia’s DEQ.  Another response is the HRSD’s SWIFT project, short for Sustainable Water Initiative For Tomorrow.  SWIFT’s concept is to take treated wastewater that would otherwise be discharged into area rivers, further treat the water so that it meets drinking water standards and matches chemical characteristics of Potomac Aquifer water, and then inject the water hundreds of feet deep into the aquifer.  By its expected completion in 2032, the project would be adding 100 million gallons per day to the aquifer.  Besides its predicted benefits of recharging the aquifer, SWIFT’s use of wastewater may also significantly reduce nutrient discharges into Chesapeake Bay tributaries.

SWIFT is a big, long-range idea for complicated water issues in Hampton Roads, and its progress is being watched by water professionals and communities well beyond eastern Virginia.

Thanks to Timothy Seaman for permission to use this week’s music, and we close with about 20 more seconds of “East Virginia.”

The version heard here of “East Virginia,” from the 2006 album, “Jamestown: On the Edge of a Vast Continent,” is copyright by Timothy Seaman and Pine Wind Music, used with permission.  More information about Timothy Seaman is available online at https://timothyseaman.com/en/.  This music was used previously by Virginia Water Radio in Episode 496, 10-28-19.

The comments by Virginia Department of Environmental Quality Director David Paylor were excerpted from a Virginia Water Radio recording of the January 18, 2017, meeting of the Virginia House of Delegates’ Agriculture, Chesapeake and Natural Resources Committee in Richmond. 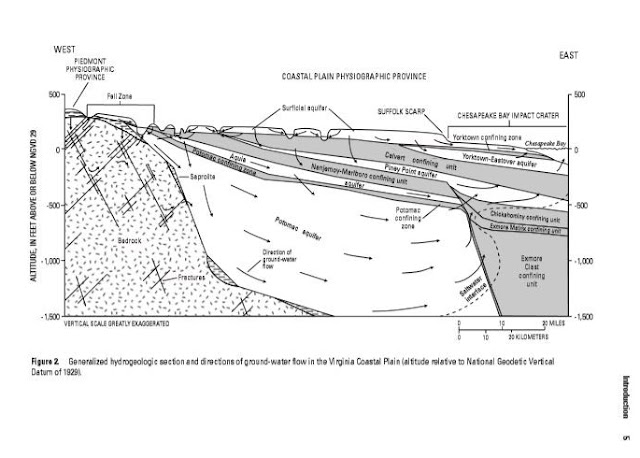 Dave Ress, Virginia once feared some cities would run out of groundwater. But conservation efforts are working, [Newport News, Va.] Daily Press, 12/5/19.

Amanda Ruggeri, The ambitious plan to stop the ground from sinking, BBC, 12/1/17.

Virginia Legislative Information System, 2019 Virginia General Assembly Senate Bill 1414, online at https://lis.virginia.gov/cgi-bin/legp604.exe?ses=191&typ=bil&val=sb1414.  This bill established an oversight committee for the SWIFT project.  From the bill summary at this site: “The bill establishes a 10-member advisory board called the Potomac Aquifer Recharge Oversight Committee (the Committee), directing it to ensure that the SWIFT Project is monitored independently.”

All Water Radio episodes are listed by category at the Index link above (http://www.virginiawaterradio.org/p/index.html).  See particularly the “Groundwater” subject category.

Grades K-6 Earth Resources Theme
3.10 – impacts on survival of species, including effects of fire, flood, disease, and erosion on organisms; effects of human activity on air, water and habitat; and conservation and resource renewal.
4.9 – Virginia natural resources, including watersheds, water resources, and organisms.
6.9 – public policy decisions related to the environment (including resource management and conservation, land use decisions, hazard mitigation, and cost/benefit assessments).

Grades K-6 Matter Theme
6.5 – properties and characteristics of water and its roles in the human and natural environment.

World Geography Course
WG.2 – how selected physical and ecological processes shape the Earth’s surface, including climate, weather, and how humans influence their environment and are influenced by it.
WG.3 – how regional landscapes reflect the physical environment and the cultural characteristics of their inhabitants.
WG.18 – cooperation among political jurisdictions to solve problems and settle disputes.