All Web addresses mentioned were functional as of 3-2-18.

From the Cumberland Gap to the Atlantic Ocean, this is Virginia Water Radio for the week of March 5, 2018.

SOUND AND VOICE – ~8 sec – “It is a huge piece of legislation. It is monumental.”

That’s the sound of an electricity transmission line and a comment heard on February 8, 2018, in the Commerce and Labor Committee of the Virginia House of Delegates, where the “huge and monumental” legislation under discussion was House Bill 1558, on regulation of electric utilities.  What’s the water story to this big and important bill about electric utility regulation?

The answer starts with connections between water and energy in general.  Here are four.   First, substantial water is used in producing energy.  Second, energy is used in providing water.  Third, energy production can generate solid or liquid wastes that affect water.  And fourth, fossil fuel-based energy production generates air pollutants that can eventually affect water.  All of these water impacts are affected the energy source used to produce electricity, whether it’s fossil fuels, nuclear, solar, wind, hydropower, or something else.

Now, back to electricity regulation.  In Virginia, this involves regulation primarily of two companies, Dominion Energy Virginia and Appalachian Power, which are allowed exclusive service territories in the Commonwealth, and are therefore considered regulated monopolies.  Regulation is by the State Corporation Commission, or SCC, and the General Asssembly sets the laws that determine the SCC’s authority.  A key part of that authority is the timing of SCC reviews of the rates, charges, facilities, and service provision of the regulated monopolies.  Those reviews involve the determination of what the SCC is to consider in the “public interest,” and the determination of what costs by the utilities are “reasonable and prudent.”

House Bill 1558, and the companion bill, Senate Bill 966, change the review periods that were set in legislation passed in 2015. The bills also make public interest or reasonable cost determinations on three issues relevant to connections between water and energy: investments in renewable energy, energy efficiency (including weatherization), and grid modernization, including putting transmission lines underground to protect against storm damage.  Much of the discussion of these bills centered on how utility investments in those areas would be addressed in SCC review of electricity rates and potential refunds to customers.

As of March 1, House Bill 1558 had passed both houses but with somewhat different versions; and Senate Bill 966 had passed both houses in the same version.  The long and complicated bills attracted lots of attention, proposals for changes, and contrasting assessments, and they’ll likely be among the most significant legislation of this General Assembly.  For more information about these bills, visit the Virginia Legislative Information System, online at lis.virginia.gov; or contact your local delegate or state senator.

We close with one more comment from the February 8 House committee discussion, which helps explain why utility rate bills get so much attention:

CLOSE – ~8 sec – “Monopoly utility rate-making is an esoteric area of the law, but it has a profound impact on the lives and pocket-books of Virginians.”

For more Virginia water sounds, music, and information, visit us online at virginiawaterradio.org, or call us at (540) 231-5463.  Virginia Water Radio is produced by the Virginia Water Resources Research Center, part of Virginia Tech’s College of Natural Resources and Environment.  Thanks to Ben Cosgrove for his version of “Shenandoah” to open and close the show.   In Blacksburg, I’m Alan Raflo, thanking you for listening, and wishing you health, wisdom, and good water.

Voices heard in this episode were from speakers at the February 8, 2018, meeting of the Virginia House of Delegates’ Committee on Commerce and Labor.  The audio excerpts were derived from posted video of the meeting, online at http://sg001-harmony.sliq.net/00304/Harmony/en/PowerBrowser/PowerBrowserV2?fk=1179&viewMode=2.  In that video, discussion of HB 1558 begins at about 3:28 p.m. (the time of day is shown under the video) and the discussion of this bill continues for about 1 hour and 27 minutes.

A 26 min./13 sec. audio excerpt (produced by Virginia Water Radio) of that discussion is available at this link. 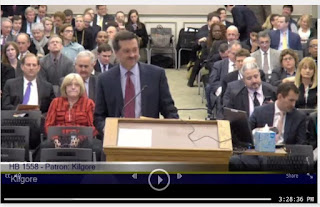 Delegate Terry Kilgore (R-1st) ) (center) preparing to testify on HB 1558 (which he sponsored) at the Virginia House of Delegates Commerce and Labor Committee meeting on February 8, 2018. Image captured from Virginia General Asesmbly video of the meeting, online at http://sg001-harmony.sliq.net/00304/Harmony/en/PowerBrowser/PowerBrowserV2?fk=1179&viewMode=2.

These bills would change the electric utility review structure for the State Corporation Commission that is currently in effect (as of March 2018) that was established by the 2015 Virginia General Assembly in SB 1349, Electric utility regulation; suspension of regulatory reviews of utility earnings.  The 2015 bill barred the SCC from conducting a biennial review of Dominion Virginia Power for the five test periods beginning January 1, 2015, and ending December 31, 2019, and of Appalachian Power for the four test periods beginning January 1, 2014, and ending December 31, 2017 (those time periods are known as “the Transitional Rate Period”).

Virginia Legislative Information System, online at http://lis.virginia.gov/lis.htm.  This site provides access to all bills considered by the Virginia General Assembly in 2018 and in past sessions back to 1994.

Pending Va. law will affect utility bills for a decade. Here’s what you need to know, Washington Post, 2/21/18.

Utility overhaul passes House, but with a big amendment to address “double dip,” Richmond Times-Dispatch, as published by Roanoke Times, 2/13/18.

Utility bill a riddle wrapped in a mystery, inside an enigma [commentary], Richmond Times-Dispatch, 2/6/18.

Committees are key parts of the General Assembly process. Legislation about water or about activities that can affect water may be assigned to any of several standing committees, most of which meet weekly during the General Assembly session.  As of 2018, live streaming and archived video of committee meetings are available.  Information on live streaming of House committee meetings is online at https://publications.virginiageneralassembly.gov/display_publication/209; archives of previous meetings are available via the Web pages for each committee, which can accessed via the LIS site.  Video of Senate committee meetings (both current and archived) is available online online at http://virginia-senate.granicus.com/ViewPublisher.php?view_id=3.

Virginia Water Central News Grouper posts relevant to the Virginia General Assembly are available online at https://vawatercentralnewsgrouper.wordpress.com/?s=Virginia+General+Assembly.  A post about the electric utility regulation legislation in the 2018 Assembly is online at https://vawatercentralnewsgrouper.wordpress.com/2018/02/22/water-in-the-2018-virginia-general-assembly-electric-utility-rate-review-bills/.

This episode may help with the following 2010 Science SOLs.

The episode may also help with the following 2015 Social Studies SOLs.