All Web addresses mentioned were functional as of 8-3-18.

From the Cumberland Gap to the Atlantic Ocean, this is Virginia Water Radio for the week of August 6, 2018.

That music is an excerpt of “Cockles and Mussels,” a 19-Century Irish song also called “Molly Malone,” whose lyrics are about a fish seller on the streets of Dublin.  That fish merchant would have been selling saltwater mussels, the kind of mussels with which beachgoers or restaurant diners may be familiar. Less familiar to many people, however, are freshwater mussels.  This week, Virginia Water Radio begins a series on Virginia’s freshwater mussels and efforts to restore the populations of these important, filter-feeding components of aquatic environments.  To begin, have a listen for about 25 seconds to Virginia’s Clinch River and several guest voices calling out some mysterious, descriptive names.

You heard the common names of 13 species of freshwater mussels known from Virginia.  Some are known from the Clinch and other rivers in the watershed of the Upper Tennessee River in southwestern Virginia, while others are from the Commonwealth’s Atlantic Slope rivers, such as the James.  Ten of the species whose names you heard are listed as either federal or state endangered species.  In fact, of 77 total freshwater mussel species known from Virginia, three have become extinct and 39—or 51 percent—are currently listed as endangered or threatened at the federal or state level.  That gives freshwater mussels by far the highest percentage of threatened or endangered species of any group in Virginia.

Freshwater mussels are of interest not only because of this population status but also because of their unusual life cycle and their ecological roles in rivers and other waters.  To learn more about freshwater mussels and their biology, have a listen for about two minutes to Jess Jones, a mussel biologist with the U.S. Fish and Wildlife Service and the director of the Freshwater Mollusk Conservation Center at Virginia Tech.

Since 1994, Virginia Tech scientists and students have conducted activities to study mussels, grow them in culture, and restore them to locations in rivers in Virginia and Tennessee.  That work has been done in cooperation with the U.S. Fish and Wildlife Service, the Virginia Department of Game and Inland Fisheries, and the Tennessee Wildlife Resources Agency, and it’s been supported by grants from the Fish and Wildlife Service, the National Fish and Wildlife Foundation, and the states of Virginia and Tennessee.  The next episodes in this series will examine those mussel propagation and restoration activities.

Thanks to Timothy Seaman for permission to use this week’s music, and thanks to several Virginia Tech co-workers for lending their voices to this episode.

“Cockles and Mussels,” performed by Timothy Seaman, is from the 2004 album “Virginia Wildlife,” on Pine Wind Music; used with permission.  Mr. Seaman’s Web site is http://www.timothyseaman.com/.

The Clinch River was recorded on July 1, 2018, in Russell County, Virginia.

Comments made by Jess Jones in this episode’s audio were recorded August 3, 2018, in Blacksburg, Virginia.

Click here if you’d like to listen to an 18 min./43 sec. presentation on freshwater mussels given by Jess Jones on January 13, 2017, to faculty, staff, and students of Virginia Tech’s College of Natural Resources and Environment.  Thanks to Will Pfiel of that college for making a recording of that talk available to Virginia Water Radio. 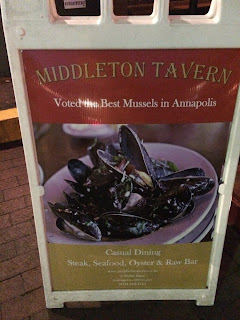 Mussels on the menu at a restaurant in Annapolis, Md., August 4, 2018.  These would not have been freshwater mussels, but rather their saltwater counterparts.

“What is a freshwater mussel?
Freshwater mussels are mollusks and are similar to their marine clam and oyster cousins.  They have two shells connected by a hinge-like ligament.  Around the world, mussels live in a variety of freshwater habitats but are most prevalent in stream and rivers. T hey vary in their adult sizes from those as small as a thumbnail to others as big as a pie plate.  The wide variety of shapes and colors are reflected in species like purple wartyback, pink heelsplitter, and threeridge.  On the stream bottom, mussels are sometimes only noticeable by two small siphons, which are used to draw and expel water.  When quickly dislodged, a large muscular foot that is used to move amongst the stream bottom can be readily seen.”

“How are mussels distributed?
The diversity of freshwater mussels in the United States is unmatched.  Of the estimated 1,000 species worldwide, the United States historically contained 304, about one-thrid of the total world’s fauna. …The lion’s share of this diversity is found in the southeastern drainages of the Ohio, Tennessee, Cumberland, and Mobile rivers.  One of the most diverse drainages, the Tennessee contains 102 species, nearly one-third of the country’s fauna!  Virginia becomes part of the equation because the Tennessee River headwaters are within the southwestern region of the state. Virginia’s portion of the Tennessee River drainage includes the Powell, Clinch, and Forks of the Holston (North, Middle, and South) rivers….”

“How do mussels function in the environment?
Freshwater mussels are an essential component of our rivers and streams.   By their siphoning actions, mussels filter bacteria, algae, and other small particles, which make them one of the few animals that improve water quality.  Mussels also serve as a food source to many species of fish, reptiles, birds, and mammals.  The outer shell of a live mussel is usually covered by aquatic insects, algae, and plants.  Even when dead, the empty shell functions as a nesting site for small fish like madtoms and darters.”

“What are uses people have found for freshwater mussels?
People have a long history of benefiting from mussels.  Native Americans used mussels as a ready food source, implements for tools, and as jewelry.   Before the advent of plastics in the 1930’s, most buttons were made from freshwater mussels.  Modern day buttons retain the luster of those found in earlier times.   Today, freshwater mussels are a key ingredient in the pearl industry.  Mussels are collected in several areas of the United States and their shells are sold to Asian markets.  Their shells are used to make numerous round beads that are placed in oysters and serve as the nuclei for freshwater pearls.”

“How do mussels reproduce?
The life cycle of the freshwater mussel is one the most complex and interesting in the animal world.  Unlike other animals that can actively search for a mate, the sedentary mussel depends on the river current to reproduce.  The process begins with the male releasing sperm, and the female located downstream drawing it in through her incurrent siphon.   Numbering in the 100’s to hundreds of thousands, the fertilized eggs develop into glochidia within her gills.  Once mature, they are released into the water column to begin the second part of their lives-attaching to the gills, fins, or scales of freshwater fishes.  At this point, the process is further complicated because not only do the glochidia have to find a fish, but it has to be one of a few specific fish species for the life cycle to continue.  If a glochidium attaches to the correct fish species, it encysts into the fish’s tissue and undergoes a short life as a parasite.  Over several weeks, it begins to develop gills, a foot, and other internal structures to become a juvenile mussel.  The now fully transformed, but still microscopic, juvenile will drop off the fish and begin its life on the stream bottom.…”

U.S. Fish and Wildlife Service/Endangered Species Program, “Protecting Our Waters: The Mussels of Virginia’s Clinch and Powell Rivers,” by Meagan Racey, 12/27/12, online at https://www.fws.gov/endangered/map/ESA_success_stories/VA/VA_story2/index.html [corresponds to Virginia Department of Game and Inland Fisheries video listed below, “Endangered Mussels Released into the Clinch River, Largest Release in Eastern US,” 9/30/10, 2 min./36 sec., online at https://www.youtube.com/watch?v=Uf0ZIoNnuiI].

U.S. Fish and Wildlife Service/Northeast Ecological Services, “Giving Mussels a Boost in Tenn.’s Powell River,” 9/26/12, online at http://ne-ecological-services.blogspot.com/2012/09/giving-mussels-boost-in-tenns-powell.html.  This site includes a 2 min./32 sec. video on a mussel release and discussion by Jess Jones of Virginia Tech, online at https://youtu.be/ADy5BNkmRh4.

Virginia Department of Game and Inland Fisheries, “Fish and Wildlife Information Service,” online at http://vafwis.org/fwis/?Title=VaFWIS+Species+Information+By+Name&vUT=Visitor.  Mussel species in Virginia are listed at this link.

For More Information about Mussels and Other Mollusks
Freshwater Mollusk Conservation Society, online at https://molluskconservation.org/.