Episode 462 (3-14-19): The American Woodcock is an Inland Sandpiper with a Spring Evening Spectacle

Unless otherwise noted, all Web addresses mentioned were functional as of 3-1-19.

From the Cumberland Gap to the Atlantic Ocean, this is Virginia Water Radio for the week of March 4, 2019.

Those were sounds from a streamside park in Blacksburg, Va., on the evening of March 24, 2017.  Amidst the loud Spring Peeper frog calls, could you hear a short, buzz-like sound?  That’s this week’s mating-bird mystery sound.  Have a listen for about 10 seconds to a clearer recoding of that sound, this time provided by Lang Elliott from the Stokes Field Guide to Bird Songs, and see if you know what makes the sound.  And here’s a hint: anyone who could guess this really would rock.

If you guessed an American Woodcock, you’re right!  The buzzing sound, called a peent, is part of the species’ male courtship display, a springtime evening and night ritual occurring in moist woods and fields across the eastern United States, including all of Virginia.  The male birds make the peent sound on the ground, then make a spiraling upward flight for about 200 to 300 feet, chirping and using their wings to make a twittering sound, before descending to the ground to start the pattern over again.

The Cornell Lab of Ornithology, at its “All About Birds” Web site, has described the American Woodcock as a “plump little shorebird [that] lives in young forests and shrubby old fields across eastern North America.”   This bird is an inland species in the bird family of sandpipers, whose members more typically are coastal shorebirds.  The woodcock uses it long beak—a characteristic sandpiper feature—to probe the soil for water and for the earthworms and other invertebrates it eats.  Its preference for evening and night activity, its habitat, and its behaviors have generated a number of nicknames for this species, including night partridge, bog borer, mudbat, whistler, and hokumpoke.

Referring to the American Woodcock’s mating ritual, the Cornell Lab has said, “The male woodcock’s evening display flights are one of the magical natural sights of springtime in the East.”  If you’re fortunate and attentive, those sights and sounds might greet you on a moist meadow walk some springtime evening or night.

Thanks to Lang Elliott for permission to use this week’s sounds, and we close with the wing-twittering and chirping sounds from an American Woodcock’s courtship flight.

The first American Woodcock sound in this episode was recorded by Virginia Water Radio at Heritage Park in Blacksburg, Va., on March 24, 2017, about 7:45 p.m.

The second and third American Woodcock sounds were from the Stokes Field Guide to Bird Songs-Eastern Region CD set, by Lang Elliott with Donald and Lillian Stokes (Time Warner Audio Books, copyright 1997), used with permission of Lang Elliott, whose work is available online at the “Music of Nature” Web site, http://www.musicofnature.org/. 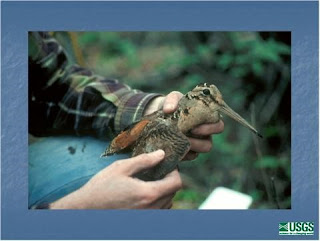 American Woodcock, 12/20/16, location unidentified.  Photo made available for public use by the U.S. Geological Survey, online at https://www.usgs.gov/media/images/american-woodcock-scolopax-minor. 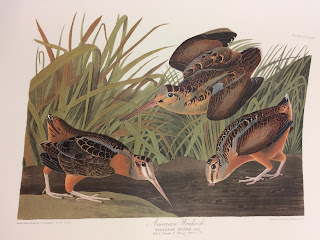 American Woodcock painting originally published between 1827 and 1838 by John James Audubon in Birds of America (plate CCLXVIII [268]), as reprinted in 1985 by Abbeville Press, New York. Photo taken March 7, 2018, from the reprint copy (no. 6 of 350 copies printed in 1985) owned by Special Collections of Virginia Tech Libraries.  Virginia Water Radio thanks Special Collections for permission to photograph their copy and for their assistance.  Information about Birds of America is available from the National Audubon Society, online at http://www.audubon.org/birds-of-america; the American Woodcock entry is online at https://www.audubon.org/birds-of-america/american-woodcock.

EXTRA INFORMATION ABOUT THE AMERICAN WOODCOCK

The scientific name of the American Woodcock is Scolopax minor.

Here are some points about the American Woodcock, excerpted from the Virginia Department of Game and Inland Fisheries, “Fish and Wildlife Information Service,” online at https://vafwis.dgif.virginia.gov/fwis/booklet.html?&bova=040140&Menu=_.Taxonomy&version=17955.

“The breeding season is from late February to mid-May.  The earliest known incubation dates in Virginia are January 14.  This species is polygamous and promiscuous.   During migration they move south after the first heavy frost, then north between February and March  The home range has approximately 100 acres for the brood, several square miles in the summer and winter, and is variable for mating.  This species is crepuscular [active in the evening].  The males migrate before the females to set up singing grounds, and courtship only takes place when there are scattered woody plants one to two feet high.  The male gives off a peenting sound in a vertical flight to attract the female.  After copulation, the female leaves the male to build a nest and the male may continue to attract other females.  The nest is a cup-like depression on the ground with a few twiqs around the rim.  The hen will stay on the nest even when threatened.”

“This is a shorebird that never lost the vestigial requirement for open space for courtship and breeding.  In the spring they use areas that contain gray birch, aspen, white pine, alders, red maple, dead grasses, red cedar, juniper, black cherry, dogwood, shrubs and young trees.  Singing grounds are in this type and nests are found in areas of mixed hardwood growth of birch, aspen, conifer and alder.  In the summer they use permanent wet spots with alder, dogwood, crab apple, and hawthorne.  They also use dry fields for insects. In the winter they use agricultural fields, bottom land and other upland fields with various species of pine.”

Cornell Lab of Ornithology, “All About Birds/American Woodcock,” online at https://www.allaboutbirds.org/guide/American_Woodcock/.

Woodcock Limited, “What is an American Woodcock,” online at http://woodcocklimited.org/what-is-an-american-woodcock/.

For More Information about Birds in Virginia or Elsewhere
Cornell University Lab of Ornithology, “Merlin Photo ID.”  This application for mobile devices allows users to submit a bird photograph to get identification of the bird.  Information is available online at http://merlin.allaboutbirds.org/.